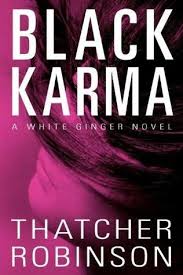 When I reviewed Thatcher Robinson’s first novel, White Ginger, for “Bookin’ with Sunny,” I ended by hoping that Robinson would “write more about this intriguing cast of characters.” I thought there were so “many possibilities for so many more stories.” My fantasy came true, kind of. Robinson has indeed written a second Bai Jiang novel, Black Karma. It’s a good mystery, I enjoyed reading it, and I happily recommend it. But to be truthful, Black Karma doesn’t resonate like its predecessor.

The laughter is missing, the insouciance of the characters has disappeared, and the irreverent flair is gone. Once again, Bai, her family, and her friends are embroiled in a multi-layered tale of triads and gangs, of murder and intrigue. This time, however, the plot is more straightforward and the motivations more obvious. I’m not sure why, but Black Karma is far more conventional than White Ginger. Its tone is decidedly darker, as the title implies, San Francisco noir rather than comically ironic. I missed the earlier flair.

This time Bai Jiang is hired by a police lieutenant to find Daniel Chen, a man wanted in connection with an errant drug bust. Why would the police want to hire a souxun, a Chinese “people finder”? Bai, rightly so, is suspicious of the lieutenant’s motives, but she agrees to take the case. Soon, she is traversing the Bay Area, looking for the missing man. She finds bodies in Chen’s Berkeley office, and a lively naked woman in Chen’s cottage in the Berkeley hills. Complications take Bai from a sweaty alleyway gym in San Francisco’s Mission District to the penthouse of the Mark Hopkins Hotel on Nob Hill. She even goes to wine country, just outside of Healdsburg, where she and her family find refuge from increasingly mysterious predicaments.

As she travels, and as the sights and sounds of the Bay Area take center stage, Bai becomes involved with an array of unique characters. Jason, the father of her daughter and a triad leader, reappears, as does her charming gay partner, Lee Li. Another Chinese family with suspect business ties, the Kwan family, plays an important Black Karma role. Howard Kwan, in fact, becomes a counterpoint to Jason, as Bai struggles with her attraction to the man she has loved all her life and her distrust of the man Jason’s mother has chosen to replace her son. Along with the Chinese intrigues, Black Karma involves Hispanic gangs. And once again, Bai rescues an unfortunate young girl/woman, a stray caught by gang violence and unable to extricate herself without Bai’s help.

There is so much to like about Black Karma, I feel almost guilty wishing for the edginess of White Ginger. Maybe it was the presence/absence of Lee Li in the sequel. He plays a more peripheral role in Black Karma and I missed his waggish wit. Maybe it was the conventional chapter listings, numbers rather than those wonderful Chinese sayings. Again, I missed the wit. Still, I’m hoping for another sequel. Next time, however, I’d like the old Bai Jiang and a lot more Lee Li to help her out. Maybe a little more Jason, too? Despite his gangster ties, I find him as attractive as Bai does!  – Ann Ronald 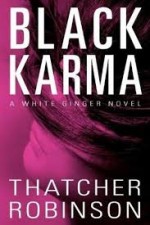 Ann Ronald is a retired English professor from the University of Nevada, Reno. Author of dozens of reviews, she’s also written a number of books about the American West. They include literary studies such as The New West of Edward Abby and Reader of the Purple Sage, cultural studies such as GhostWest and Oh, Give Me a Home, and nature writing such as Earthtones: A Nevada Album. Her latest is a work of fiction, Friendly Fallout 1953. Since retiring, she’s been reading vociferously, so “Bookin’ With Sunny” is giving her a wonderful opportunity to share thoughts about her favorite new discoveries.
More from this reviewer
PrevGod’s Hotel
Rebels of the KasbahNext