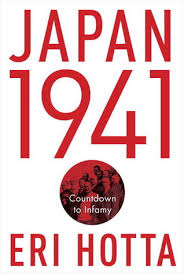 Japan 1941, by Eri Hotta, a Japanese historian, traces the crucial decisions made by the Japanese political and military leadership during 1941–the months that ended, of course, with the attack on Pearl Harbor. She provides the necessary background and context to those eleven months by skillfully including crucial events originating as far back as the mid-19th century when Japan first collided with Western industrialized influences. Still, Hotta’s Japan 1941 is primarily focused on the Japanese personalities who made the crucial decisions that led to war.

When writing about such great events, historians sometimes fall into the rhetorical trap of making events appear to lead inevitably to the known end–in this case December 7, 1941. Hotta’s approach is more nuanced.  On nearly every page she demonstrates to her readers the role of contingency in human events. The Japanese leaders had choices and could have taken different roads. Perhaps different results might have occurred. For example, it was not pre-ordained that the Japanese attack the Americans in the Pacific rather than the Soviets in Manchuria. Either was possible. Nor was it predetermined that Japan maintain its vague alliance with Germany and Italy rather than abandon it and pursue more peaceful diplomacy with the US.

As someone immersed in Japanese culture, she demonstrates how leaders such as General Tojo, Prince Konoe, and Admirals Nagano and Yamamoto,  projected two often contradictory belief systems simultaneously without pause or embarrassment. There was a private self that was typically less bellicose than the public one. In American culture we might describe the first as the authentic self and the second as the persona. In Japanese culture, however, neither is seen as more real or more honest than the other. Both have a legitimate place in the culture. Using this anthropological analysis, Hotta is able to guide the reader through the bewildering intricacies of Japanese decision-making in those crucial months. So, the plan to attack Pearl Harbor (and five other strategic points in the Pacific), while not inevitable, is understandable.

Although the reader is led to understand Japan’s decision, Hotta does not prescribe to the famous French phrase: to understand all is to forgive all. For her, the Japanese collective decision to enter into war against the U.S., Great Britain, and the Netherlands is unforgivable. Hence, the subtitle of her book is Countdown to Infamy, borrowing the word that FDR used in his speech to Congress on December 8, 1941. I suspect that her analysis makes Japanese traditionalists and nationalists grind their teeth

Hotta never lets the Japanese leaders hide behind their private and public  faces. Ultimately, she argues that the decision to go to war was irrational.  It was a gamble made out of desperation. Many Japanese leaders recognized the enormity of their gamble but were unable or unwilling to change courses

In 1941 the odds against Japan prevailing in a war with the United States were already one-sided. Contemporary Japanese estimates in 1941 concluded that the US was out producing the Japanese by a ratio of twenty to one. If Japan waited, the odds against their winning became astronomical. Understandably, 1941 became the year of decision.  It was then or never!? If Japanese leaders had opted for never, Japan might have become one of the world’s largest economies and have gained international prestige without war. But that’s fantasy history, and Hotta doesn’t allow herself to indulge in that specious form of logic.

A caveat: Although written for an English-speaking audience, Japan 1941 is written from the Japanese perspective. Hotta analyzes sources and materials not previously synthesized so extensively. She does not try to be balanced. Her conclusions decisively and critically hold the Japanese leaders accountable. To achieve balance then, one might also wish to read some of the many books that emphasize  American sources and explore American responsibility.    – Neal Ferguson 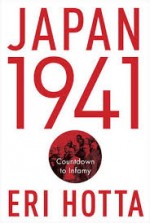 Neal Ferguson is a self described Anglo-phile. After studying for a PhD in British history and doing research for a year in various British archives, he came to the University of Nevada in 1970 to teach. Soon he found himself in administration where he remained until 2003. After returning to full-time teaching a decade ago, he decided to concentrate his teaching energies on Medieval British history and various global aspects of World War II. Dedicated to Ambrose Bierce’s proclamation that the purpose of war is to teach Americans geography, Neal insists that his students accompany him (in class) to sundry east European rivers and steppes, African deserts and jungles, south-east Asian mountain ranges and peninsulas, and small islands and coral reefs in the Pacific. Currently he is writing a book about the ups and downs of General Douglas MacArthur’s military reputation.
More from this reviewer
PrevThe Six O’Clock
God’s HotelNext