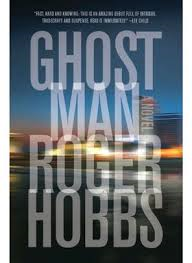 Without hesitation I can say that Ghostman is as powerful a thriller as I’ve read in a long time. Roger Hobbs has developed a nameless, faceless character who leaves no fingerprints and takes no prisoners. This ghostman lives anonymously, off the grid, moving from place to place, changing his identity and even his physical appearance, melting like wax into any environment he chooses. He robs banks, and he repairs the results of bank robberies gone bad. He makes people and problems disappear. “Trying to catch a ghostman is like trying to catch smoke,” he explains. He is a ghost, but he is not a common criminal. Well-educated, articulate, sophisticated, almost debonair, his avocation, surprisingly, is translating the Latin classics. But the ghostman lives chiefly for the adrenaline rush, “the pure ecstasy of the job,” that drives him into excruciating scenes and situations.

Ghostman is Hobbs’s first novel. It begins with an attack on an armored car delivering money to an Atlantic City casino. The robbery ends disastrously, but one of the gunmen escapes and the money disappears. Hired by the man who orchestrated the crime, the ghostman’s job is to track down the wounded thief and recover the stolen cash. Because the money came from the Federal Reserve, it is tagged with a self-destructing device. Forty-eight hours from the moment of the heist, the entire 1.2 million dollars will explode. As the ghostman works, he counts the time remaining. Thirty three hours; twenty-seven.

Meanwhile, another heist is embedded in the novel. The ghostman agrees to take the Atlantic City casino job because he owes Marcus, a criminal mastermind who sits safely in Seattle while his felonious plans are carried out three thousand miles away. Five years earlier, the ghostman committed another robbery planned by Marcus, a robbery that failed because the ghostman, then called Jack, made an amateurish mistake. Wherever the ghostman goes, that disaster haunts him. So even while in the throes of solving the Atlantic City fiasco, he keeps recalling the greater fiasco of the bank robbery in Kuala Lampur. Parallels abound.

Hobbs plays the stresses and strains of the two story lines against each other, heightening the tensions of both. Neither plot is resolved until the final pages of the novel, when the reader finally learns the full dimensions of Jack’s Kuala Lampur mistake, and when the reader also marvels at the ghostman’s cool finesse while solving the dilemma of the missing Atlantic City money. Along the way, I promise, any reader’s palms will sweat with the car chases, the weaponry, the psychological stand-offs, the fisticuffs, the police presence, the escapes, the double-crossing and the double entendres. Every moment is filled with tense excitement, a momentary lull, and then another spine-tingling event. Twenty-two hours; thirteen; nine.

Jack and the ghostman are the same, and yet they’re not the same at all. Hobbs makes sure the reader sees both those subtle similarities and those delicate differences. I don’t know if the ghostman, like Jack Reacher or like Clint Eastwood’s High Plains Drifter, will reappear in future tales. Part of me wants to savor this novel as a stand-alone masterpiece of thrills and chills, but part of me also want to read more about this remarkable character. No matter, I certainly look forward to whatever Roger Hobbs decides to write next.

Ann Ronald is a retired English professor from the University of Nevada, Reno. Author of dozens of reviews, she’s also written a number of books about the American West. They include literary studies such as The New West of Edward Abby and Reader of the Purple Sage, cultural studies such as GhostWest and Oh, Give Me a Home, and nature writing such as Earthtones: A Nevada Album. Her latest is a work of fiction, Friendly Fallout 1953. Since retiring, she’s been reading vociferously, so “Bookin’ With Sunny” is giving her a wonderful opportunity to share thoughts about her favorite new discoveries.
More from this reviewer
PrevMending the Moon
Why I FarmNext