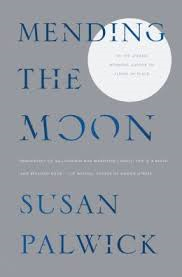 With Mending the Moon, Nevada writer Susan Palwick emerges as a major literary figure. Her work until now has been mostly in the field of science fiction with the novels Flying in Place and The Necessary Beggar and the short story collection The Fate of Mice. Never prolific, Palwick has spent most of her long career teaching at the University of Nevada, Reno.

Urged by her publisher to try something besides science fiction, Palwick weaves a tale of family tragedy, the grief that follows, and eventual reconciliation. A Reno woman named Melinda is raped and murdered while visiting Mexico. Her killer, a young man named Percy returns to his well-to-do family in Bainbridge Island near Seattle and drowns himself.

I’m giving away nothing here. These events are recounted in the first few chapters. The rest of Mending the Moon is about family and close friends of both the victim and her murderer. These two groups ultimately come together to ponder the kind of senseless tragedy that’s all too common today. The tone is somber, but the survivors all become better people through their shared experience.

Besides being an English teacher, the author is active in the Episcopal church. Palwick is both a lay Eucharistic minister and a volunteer hospital chaplain. I mention this because her faith and philosophy are explicit on almost every page of the novel.

Mending the Moon is much more than a grim slog through grief and unhappiness. There is actually comic relief. Alternating chapters recount the adventures of a comic book character named Comrade Cosmos and his eternal battle with a villain who calls himself The Emperor of Entropy. The characters in the real-life chapters of the book are all familiar with the comic book, particularly Melinda’s son Jeremy. As it turns out, superheroes have family problems too, and the exploits of Comrade Cosmos have parallels to the real-world story.

The decision by Tor Books to encourage Susan Palwick to break away from science fiction was a sound one. Her best qualities as a writer are human drama and compassion laced with humor. All of these are evident in Mending the Moon. Still, I hope in the future, Palwick’s publisher will permit her to return to the science fiction she does so well.

One final note: Reno, Nevada is portrayed in Mending the Moon as mostly a university town, which it is. This is a refreshing contrast from the traditional image of The Biggest Little City as a mecca for gambling and divorce.   – Dan Erwine

Also available by Palwick: Flying in Place; Shelter; The Fate of Mice; The Necessary Beggar; Brief Visits: Sonnets from a Volunteer Chaplain; Homecoming.

Dan Erwine holds a BS in Telecommunications, San Diego State University. Dan recently retired after four decades in radio broadcasting. His background San Diego stations KFSD and NPR's KPBS, and KUNR, Reno, NV. Over the years, Dan has produced and hosted a number of talk shows and interviewed over five thousand writers in almost every genre and career, from such notables as David Brin to Seamus Heaney, Allen Ginsberg, Judy Collins, Charlton Heston and Wally Schirra. Dan is a comic book aficionado and has a special interest in film, science fiction and mystery. He lives with his wife in Reno, NV.
More from this reviewer
PrevBelshazzar’s Daughter
GhostmanNext