Home » Reviews » Why I Farm 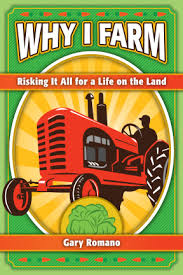 Why I Farm: Risking It All for a Life on the Land

Part memoir, part manifesto, part nostalgia and part a warning about the future, Gary Romano’s Why I Farm spells out the pluses and minuses of working as a small farmer in the United States today. He also explains clearly why the contemporary consumer needs small farmers to succeed and why so many naïve newcomers to agriculture make mistakes and fail. His subtitle, “Risking It All for a Life on the Land,” points to the balance, the perpetual vacillation between risk and reward that small farmers face every single day.

Gary Romano’s grandfather came to California from Italy, worked in the San Francisco cut-flower business for a time, wired home for a bride in 1921, married, and started his own cut-flower operation in Redwood City. The first several chapters of Why I Farm are Gary’s reminiscences of toiling on the family farm and growing up in the family business. From the time they were five years old, Gary and his twin brother, Larry, worked long hours. Alongside their father and their grandfather, they planted, weeded, cut, and sold flowers and decorative greenery. He remembers life on the flower farm as “intense, fast and furious, and full of action; something was going on all the time.”

Gary’s family stories recall a way of life no longer possible now that agricultural property near cities is prohibitively expensive, now that so many flowers are flown in from other countries, (although I knew that our out-of season fruits and vegetables come from Mexico and South America, I did not know that our flowers today come faraway places, too), and now that so many young people are fleeing their farming heritage. Gary was no different. After graduating from college, he settled into a career as an outdoor recreation specialist and park superintendent. At first he wanted nothing to do with farming; then he began missing the farming life. When given an opportunity to buy sixty-five acres that had been in the family on his mother’s side, he jumped at the chance. Gary decided to take the risk. He quit his job and became a full-time organic farmer.

Why I Farm outlines the problems he encountered. Some were expected, like the climate in Sierra Valley where the growing season is short. What crops should he plant? And how might he distribute his produce. How might he expand his business? What entrepreneurial avenues might he explore? Others difficulties were unwelcome, like the government regulations and bureaucratic paperwork mostly designed to further large-scale industrial agriculture and often inappropriate for a small-scale operation. Just getting certified as an organic farmer is a labyrinthine morass. The middle section of Why I Farm explains the risks and rewards that Gary encountered, while the fine chapters suggest positive action that should be taken to encourage the growth of small farms.

Gary also emphasizes the reasons why small farmers are essential to the distribution of healthy food. Because I frequent Farmer’s Markets, I met Gary Romano years ago. At one time or another, from season to season, I believe I’ve tried most everything he sells. I’ve also visited his farm, Sierra Valley Farms, picked my own spinach, strolled past the stalls of other vendors at the “corner store” market he established on his own property, sampled the tasty concoctions of the cooking demonstrations there. As a consumer, I take Gary’s words to heart. As a reader and as someone who concurs with his political and politic suggestions, I strongly recommend Why I Farm.               – Ann Ronald

Ann Ronald is a retired English professor from the University of Nevada, Reno. Author of dozens of reviews, she’s also written a number of books about the American West. They include literary studies such as The New West of Edward Abby and Reader of the Purple Sage, cultural studies such as GhostWest and Oh, Give Me a Home, and nature writing such as Earthtones: A Nevada Album. Her latest is a work of fiction, Friendly Fallout 1953. Since retiring, she’s been reading vociferously, so “Bookin’ With Sunny” is giving her a wonderful opportunity to share thoughts about her favorite new discoveries.
More from this reviewer
PrevGhostman
At Ease in the Borrowed WorldNext