Epitaph: A Novel of the O.K. Corral 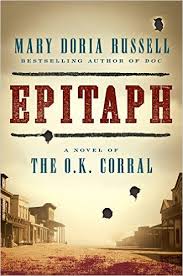 Epitaph: A Novel of the O.K. Corral

Thirty seconds at the O.K. Corral. Mary Doria Russell’s sequel novel to Doc (Holliday) is Epitaph. The center around which Epitaph’s characters whirl and speed is provided by those thirty seconds in which nine men exchange more than twenty pistol and shotgun shots from within five yards of one another, killing three and injuring three. Russell ensures that the O.K. Corral remains central by foreshadowing the upcoming confrontation until it occurs about two-thirds of the way through the novel and then referring to it afterwards until the novel’s end in 1944.

Epitaphs abound; the novel’s title echoes throughout the work. Since this is a historical novel in which Russell attempts to recount history, albeit in a highly imaginative and compelling way—no fabricated history for her—I am not giving anything away by saying that every character in the novel eventually dies. So, Russell writes all of their epitaphs. Her novel is also an epitaph for Tombstone, Arizona. That rambunctious frontier town had an adolescent, ungovernable growth spurt nourished by silver. It soon fell into premature senescence when the silver boom busted. The famous gunfight provided a huge exclamation point to the town’s decline. Occurring in the 1880s, the gunfight was in a geography where the frontier had not yet closed, but was about to do so. Appropriately enough, one of Tombstone’s newspapers was called the Tombstone Epitaph.

Whereas Russell’s novel Doc is about John Henry Holliday, a young tubercular dentist from Georgia, Epitaph focuses on Josephine “Josie” Sarah Marcus, an ambitious young Jewish woman from Brooklyn, only about eighteen when she lands in Tombstone and becomes the common law wife of Johnny Behan, Tombstone’s sheriff. Both novels are full of famous, well-crafted characters cast in Homeric molds explicitly reminiscent of both the The Iliad and The Odyssey. The Earp brothers, of course, are central to both novels. Soon Josie sets her cap at Wyatt, the most famous of the brothers. For the next six decades, this newly minted Helen of Troy crafts an epitaph for Wyatt Earp, a sanitized one that bears only occasional resemblance to his actual life, but one that reveals Josie’s brains, heart, and guile. (She would have been a challenge for Odysseus unlike the long-suffering Penelope.)

Josie’s version of Wyatt Earp is the one I grew up with. As a kid in Wichita, Kansas I did my homework in front of our family’s first TV (a snowy, rabbit-eared black and white Phillips box) watching The Life and Legend of Wyatt Earp (229 episodes), The Rebel (76 episodes), and Have Gun—Will Travel (225 episodes). In both the TV version of Wyatt Earp and in the Hollywood movie Wichita, Earp’s penchant for gambling, drinking, womanizing, and gunslinging are carefully hidden behind his shiny Marshall’s badge made possible in large part by Josie’s oral history.

Russell’s Epitaph is historical fiction, not fictional history. The characters actually lived and the settings in Tombstone and surrounding lands are well documented. She carefully constructs the historical trends and tensions that provide the essential context for Josie and the O.K. Corral. Russell brings both the period and the characters vividly to life. I ended up liking Josie and caring about her, despite her often difficult and dishonest life. She grew eccentric and increasingly demented, but she was equally as successful a publicist for Wyatt Earp as was Elizabeth Custer for her husband George Armstrong Custer or as was Homer (assuming he existed) for Achilles and Odysseus. – Neal Ferguson

Also available by Mary Doria Russell: Dreamers of the Day, A Thread of Grace; Children of God; The Sparrow; Doc. 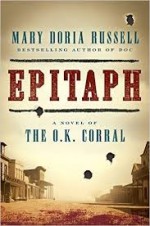 Neal Ferguson is a self described Anglo-phile. After studying for a PhD in British history and doing research for a year in various British archives, he came to the University of Nevada in 1970 to teach. Soon he found himself in administration where he remained until 2003. After returning to full-time teaching a decade ago, he decided to concentrate his teaching energies on Medieval British history and various global aspects of World War II. Dedicated to Ambrose Bierce’s proclamation that the purpose of war is to teach Americans geography, Neal insists that his students accompany him (in class) to sundry east European rivers and steppes, African deserts and jungles, south-east Asian mountain ranges and peninsulas, and small islands and coral reefs in the Pacific. Currently he is writing a book about the ups and downs of General Douglas MacArthur’s military reputation.
More from this reviewer
PrevSteinem revisited: My Life on the Road
When in Rome – Pope Francis Among the WolvesNext