Home » Reviews » Comanches The History of a People

Comanches The History of a People 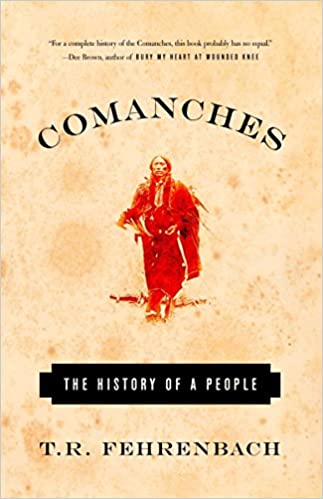 COMANCHES, THE DESTRUCTION AND THE HISTORY OF A PEOPLE. 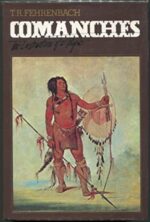 First published by Knoph in 1975, T. R. Fehrenbach’s Comanches remains a stunning popular history of a fascinating Amerindian people.  Although parts of it are somewhat dated, it is so well written and conceived that it can be read for the first time or the fifth time with relish. The 1975 edition by Knopf is now out of print, but Anchor Books republished it in 2003, with the title of Comanches, The History of a People.

Although the centerpiece of Comanches is the Comanche, the prototype of the “horse Indians,” the Plains Warriors, Fehrenbach paints on a broad canvas in multiple, subtle colors and shades.  Comanches begins in pre-history with the migration of the cultures he calls the Amerindians into North and South America via the Bering land bridge during the last ice age. His narrative then moves towards the present in panoramic sweeps to include crucial historical episodes of Amerindian migrations, how the Nermurnah (People) came to be the Comanche (hated enemy), the attempts of the Spanish, French, and Anglo-Americans to establish empires or territories between the Mississippi and the Rockies, and the conflicts that led to “the destruction of a People.”

The Comanche story strikes me as a tragic one in the classic sense of the word.  Comanches’ narrative arc encompasses an inevitable clash of civilizations, none of which understood the other. Necessarily, the written, documented part of the narrative begins with the Spanish in the 16th century and their attempt to sort out the multiple Indios and Colorado (red) cultures they tried to dominate and reduce to various forms of servitude. Fehrenbach is careful, however, not to portray his story simply as the Comanche vs. various European imperial cultures.

It is also a story of how the Comanche came to dominate a vast area of the Great Plains, the Comancheria, that stretched from the Arkansas River in the north to near San Antonia in the south and from eastern portions of present-day Kansas, Oklahoma, and Texas (about the 98th meridian) to western New Mexico, the Texas Panhandle, and southeastern Colorado (about the 104th meridian)—an area smaller than that of only two states—Alaska and Texas. They did not expand into a vacuum; it was occupied by other indigenous, bison-eating peoples.  Organized primarily in extended family groups of a few dozen people, the Comanche slowly grew to perhaps 30,000 living in five large but not cohesive groups. By incessant war, they dominated and pushed aside other Amerindians with whom their territories overlapped or abutted: Apaches, Wichita, Kansas, Utes, Shoshones, Kiowa, and Arapahoe, to name but a few.  They appear to have asserted their hegemony over the course of the 17th and 18th centuries primarily because of the horses they learned how to ride, breed, and steal. They also learned how to hunt and fight on horseback more effectively than others—including the Spanish.

A big chunk of Comanches is dedicated to the 19th century when People were reduced to tatters by their conflicts first with Anglo-Texans (Tejanos) and then with Anglo-Americans (whites).  It is to me a deeply troubling, familiar story, one that is intensified by Fehrenbach’s clear insistence that Comanche and Anglo cultures were not just oil and water; they were toxic.  The respective cultures had different conceptions of nearly every conceivable belief, moray, and practice—different and mutually incomprehensible.

Fehrenbach, a Texas historian, doesn’t resort to moral judgments about who was right and who was wrong.  Throughout his book, he painstakingly analyzes the why’s and wherefore’s of Comanche culture, successfully leading his readers to an understanding of the Comanche ethos. Nor does he single-out Anglo-American culture for particular opprobrium.   It has to be shared. According to Fehrenbach, the tragedy of the Comanche was ubiquitous. During the course of the 19th century, more advanced cultures crushed indigenous ones on every continent except the Antarctic.  He has an impressive grasp of many aspects of world history, one that deepens our understanding and appreciation of the Comanche’s demise. I find things to disagree with Fehrenbach about, but I will continue reading and recommending this absorbing and thoughtful book.  –  Neal Ferguson

Also available by T. R. Ferenbach: Lone Star: A History of Texas and The Texans; This Kind of War; Fire and Blood A History of Mexico; U. S. Marines in Action; The Battle of Anzio; Seven Keys to Texas; Greatness to Spare; The San Antonio Story; Crossroads in Korea. 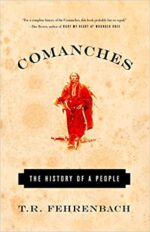 Neal Ferguson is a self described Anglo-phile. After studying for a PhD in British history and doing research for a year in various British archives, he came to the University of Nevada in 1970 to teach. Soon he found himself in administration where he remained until 2003. After returning to full-time teaching a decade ago, he decided to concentrate his teaching energies on Medieval British history and various global aspects of World War II. Dedicated to Ambrose Bierce’s proclamation that the purpose of war is to teach Americans geography, Neal insists that his students accompany him (in class) to sundry east European rivers and steppes, African deserts and jungles, south-east Asian mountain ranges and peninsulas, and small islands and coral reefs in the Pacific. Currently he is writing a book about the ups and downs of General Douglas MacArthur’s military reputation.
More from this reviewer
PrevThe Missing American
Dutton’s Dirty DiggersNext