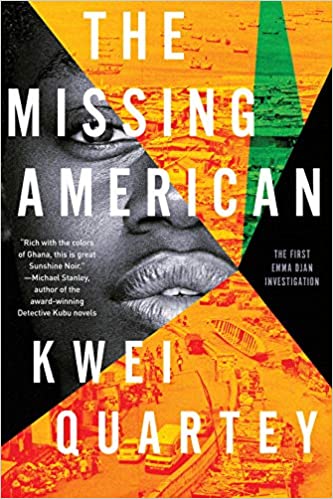 If I were to summarize The Missing American in a single couplet, I would choose Sir Walter Scott’s well-known lines (ironically, and mistakenly, often attributed to William Shakespeare).

Oh what a tangled web we weave
When first we practice to deceive!

Kwei Quartey’s novel contains multiple strands of treachery, tied to one another in a surprisingly complex web of misdirection and mystery. A set of seemingly disconnected characters enter the early scenes of The Missing American. Then, as the novel continues, they begin to weave together. By the end, almost everyone is tangled into a deceptive narrative thread that binds all the disparate events together.

Two characters initially set the plot in motion. One is Gordon Tilson, a Washington, D. C., man who has allowed himself to fall in love with a Ghana woman (and send her money) via an internet romance. When he goes to Ghana to meet her in person, however, he soon learns that no such woman exists. He has been scammed, and he seeks justice. The other key character is Emma Djan, a young Accra policewoman turned private detective. The two never meet, but their stores intertwine. Tilson becomes the missing American of the novel’s title, while Emma plays a major role in investigating his disappearance. Dozens of other characters play parts large and small in what grows into an incredible web of treachery and lies, but these two are at the story’s heart.

What makes this mystery doubly interesting is the way Quartey uses local color to heighten his tale. In modern-day Ghana, internet schemes are not only rampant but frequently are tied to Sakawa. Sakawa connects internet fraud with Ghanaian traditional rituals, and indeed another prominent character in The Missing American is a fetish priest who oversees a group of successful scammers. The links between old and new, ritualistic sacrifices overlaying and underpinning high tech operations, add a rich complexity to this most modern yet timeless novel.

I can’t begin to list all the other thought-provoking complexities further driving the plot. Police corruption, at every level, enters into the narrative at multiple points. Apparently, this is a very real problem in twenty-first-century Ghana as well as in the pages of this creative novel. In tandem, reportorial investigations play a consequential role. As a sidebar, but equally key to the plot’s unraveling is autism. Emma, on her free days, often volunteers with autistic children. That seems tangential to Tilson’s disappearance, but it isn’t. I enjoyed reading about Ghanaian food, too. At our local farmers’ market, I often buy native goods, like nkontomire and fufu and ground nut soup, from a Ghanaian woman. I recognized many of her tasty combinations described on the pages of The Missing American.

In so many ways, The Missing American is a very tasty mystery, the first of a series that will feature Emma Djan. The author, born in Ghana but now living in Pasadena, has written another mystery series that precedes this one. Also set in Ghana, Quartey’s earlier novels feature Inspector Darko Dawson as a modern crime sleuth. I definitely look forward to reading those detective stories and to future ones following the cases of Emma Djan. I expect to find multiple mysterious webs as complexly tangled and enthralling as those that ensnared me in The Missing American.  –  Ann Ronald

Also available by Kwei Quartey: Gold of Our Fathers; Death By His Grace; Death at The Voyager Hotel; Sleep Well My Lady; Wife of The Gods; Children of The Street; Murder at Cape Three Pints. 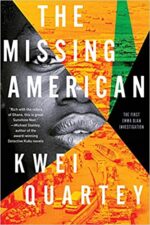 Ann Ronald is a retired English professor from the University of Nevada, Reno. Author of dozens of reviews, she’s also written a number of books about the American West. They include literary studies such as The New West of Edward Abby and Reader of the Purple Sage, cultural studies such as GhostWest and Oh, Give Me a Home, and nature writing such as Earthtones: A Nevada Album. Her latest is a work of fiction, Friendly Fallout 1953. Since retiring, she’s been reading vociferously, so “Bookin’ With Sunny” is giving her a wonderful opportunity to share thoughts about her favorite new discoveries.
More from this reviewer
PrevAlways
Comanches The History of a PeopleNext