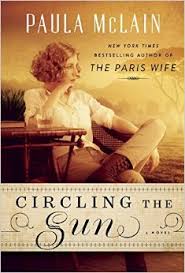 Circling the Sun – Paula McLain has written “Probably the very best” novel fictionalizing the life of a well-known person.

When I reviewed Paula McLain’s previous novel, The Paris Wife, I described it as a “psychologically astute portrayal” of Ernest Hemingway’s first spouse. Indeed I thought The Paris Wife was one of the best novels fictionalizing the life of a well-known person that I had read in some time. I now believe that with Circling the Sun, McLain surpasses her previous achievement. Circling the Sun isn’t just the best such novel I’ve read in some time; it is quite probably the very best such novel I’ve ever read.

McLain’s new novel recounts the early years of Beryl Markham, another real-life woman in thrall to another larger-than-life man. Raised in British East Africa/Kenya, Beryl grew up a free spirit who possessed more physical skills than social amenities. She was a crack horsewoman, a rugged individualist, a woman who knew her own mind. She remains famous for two solid, individual accomplishments. In 1931, Beryl became the first woman, and some say the first person, to fly solo from England to North America. In 1942, she published a memoir, West With the Night, that Ernest Hemingway read with great enthusiasm. “She has written so well, and marvelously well, that I was completely ashamed of myself as a writer,” he announced. “She can write rings around all of us.”

McLain chooses to re-create the young Beryl Markham before her years of fame. Although Circling the Sun both begins and ends with Beryl’s celebrated trans-Atlantic flight, at least momentarily, the novel itself centers on her life in Kenya long before she learned to fly. Beryl’s parents brought her to Africa when she was four. Soon, however, Beryl’s mother became disenchanted and fled back to England, taking Beryl’s brother but leaving Beryl behind. Beryl grew up somewhat alone, playing exclusively with Kipsigis natives and helping her father train horses, two decidedly unfeminine activities. When it was time for her to move in polite society, her formative years overpowered any attempts to fit in with her peers. Brash, willful, and self-assured, Beryl was utterly untamable.

Neither boarding school, nor occasional stints in England, nor a series of misguided interactions with men, altered her personality. She followed in her father’s footsteps, becoming the first woman to receive an English trainer’s license and seeing her horses win races throughout east Africa. Only when running horses did Beryl feel truly free from convention and British propriety. It is this equestrian drive, rather than aviation, that propels her character through Circling the Sun, a novel centered on her growth and development as a human being rather than on her progress toward becoming a pilot.

Important to her story, too, is Karen Blixen, a Danish woman later renowned as Isak Dinesen, author of Out of Africa. Karen’s life shadows Beryl’s, or perhaps Beryl’s shadows Karen’s. Their interactions form the psychological core of Circling the Sun. In fact, even as I was entranced by Beryl’s history, I was learning more about Blixen/Dinesen than I ever understood before. Or at least I was captured by McLain’s fictional interpretations of these two powerful personalities. As she did with Hadley Richardson Hemingway, McLain allows Beryl’s flaws and foibles to percolate with her strengths and successes. The reader vicariously breathes and suffers and celebrates with McLain’s characters, making this astute novel into something very special. The fictional Beryl Markham is absolutely life-like; her imagined story, absolutely real. – Ann Ronald

Also available by Paula McLain: The Paris Wife; Like Family, Growing up in Other People’s Houses; A Ticket to Ride; Stumble, Gorgeous. 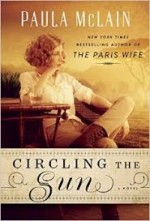 Ann Ronald is a retired English professor from the University of Nevada, Reno. Author of dozens of reviews, she’s also written a number of books about the American West. They include literary studies such as The New West of Edward Abby and Reader of the Purple Sage, cultural studies such as GhostWest and Oh, Give Me a Home, and nature writing such as Earthtones: A Nevada Album. Her latest is a work of fiction, Friendly Fallout 1953. Since retiring, she’s been reading vociferously, so “Bookin’ With Sunny” is giving her a wonderful opportunity to share thoughts about her favorite new discoveries.
More from this reviewer
PrevThe Forbidden Rose
Ashley’s WarNext