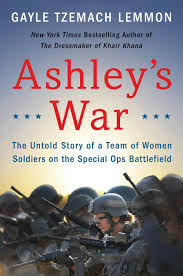 Ashley’s War: The Untold Story of a Team of Women Soldiers on the Special Ops Battlefield

The narrative of equal rights has a long and unpredictable arc. It hadn’t occurred to me that the Afghan war, now in its fifteenth year, might be a part of that arc. It is, and in this riveting story Gayle Lemmon bores into the center of a bedrock American male conceit—the male monopoly on front-line soldiering. To be sure, other cultures at other times in other places, have allowed women combat roles, but women in America have been shielded from combat by custom, ideology, and law.  Since 2001, however, women’s non-combat roles have become increasingly ambiguous and about 250 female soldiers have died in combat. (See my review of Kayla Williams, Love My Rifle.)  Leon Panetta, while Secretary of Defense, ended most of the ambiguity to be effective January 1, 2016, when American women will increasingly integrate into combat specialties.

Ashley’s War, however, is about a group of one hundred women who, in 2011, volunteered to try out for a new Army program euphemistically called Cultural Support Teams (CST). About sixty survived the two-week physical, mental, and emotional screening before receiving several months advanced training. They were then sent to Afghanistan to serve with Ranger units generally in pairs but sometimes singly. Typically they were part of special ops missions sent out to interrogate, capture, or sometimes kill an insurgent who had been tracked to a house or a compound in a remote village. These operations always occurred at night and generally involved interacting with Afghan men, women, and children. The CST women’s role was to talk to and comfort the women and children through an interpreter as the Rangers kicked down doors, searched for insurgents, and often found caches of weapons and IED’s.

The Rangers sometimes arrived on scene by helicopter but also walked miles to their destinations—always at night, always with the aid of their monocular night vision goggles, and always with heavy packs. Physical prowess was the norm. First Lieutenant Ashley White, CST, was cut no slack.  Twenty-four years old, Ashley took it for granted that she had the strength and endurance of most of the Rangers even if she wasn’t as tall and heavy. She could do thirty-five dead-hang pull-ups, one hundred perfect push-ups in two minutes, and run two miles in under twelve minutes. Moreover, she was exceptionally smart and completely focused. Since she was a kid, she had wanted to fight in a war, hence ROTC at Kent State, hence leaping at the opportunity CST presented, hence her assignment to a Ranger squad that went into Taliban territory nearly every night.

Technically, Ashley was a non-combatant but that was a quibble made possible by the CST euphemism.  She was in the thick of it night after night. From the outside she looked like any other Ranger. When called on to interact with women and children, she had to take off her helmet to be recognized as a female by the Afghani women. Her role was to calm the women and children but also to question them and to search them for weapons, seemingly contradictory activities that Lemmon doesn’t explore. The male rangers were not present, only White and the female interpreter. If the unexpected occurred (gunfire, mortar attack, an IED explosion), her job was to get the women and kids to a shelter out of the line of fire. She reacted with grace and focus under extreme pressure.

While Ashley is the primary character in Ashley’s War, Gayle Lemmon sketches the stories of half a dozen other women CST’s, too. Aside from their common traits of extreme athleticism, physical endurance, intelligence, extraordinary determination, and fascination with war, the CST’s arrived in Afghanistan having come from a variety of American backgrounds. It is an affecting story compellingly told by a discerning writer with an eye for the illuminating detail.   – Neal Ferguson 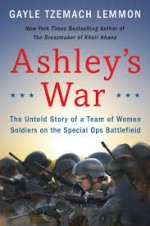 Neal Ferguson is a self described Anglo-phile. After studying for a PhD in British history and doing research for a year in various British archives, he came to the University of Nevada in 1970 to teach. Soon he found himself in administration where he remained until 2003. After returning to full-time teaching a decade ago, he decided to concentrate his teaching energies on Medieval British history and various global aspects of World War II. Dedicated to Ambrose Bierce’s proclamation that the purpose of war is to teach Americans geography, Neal insists that his students accompany him (in class) to sundry east European rivers and steppes, African deserts and jungles, south-east Asian mountain ranges and peninsulas, and small islands and coral reefs in the Pacific. Currently he is writing a book about the ups and downs of General Douglas MacArthur’s military reputation.
More from this reviewer
PrevCircling the Sun
The Narrow Road to the Deep NorthNext