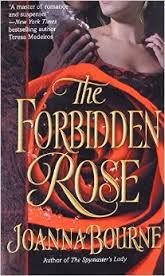 The Forbidden Rose is a bodice ripper with a brain, as well as the other requisite gendered anatomical parts.  Set in late eighteenth-century France during the reign of Robespierre, it follows the last days of his rule by tracking two fictional opponents, Marguerite de Fleurignac and William Doyle.  The two meet unexpectedly.  Her family château has been burned and looted, she is hiding in the nearby woods, and he is on his way to Paris as a British spy searching for her father.  William spics Marguerite spying on him from the ruined stable, and the result is the kind of amorous sparks one might expect from a novel that fits neatly into the bodice ripper genre. Historic milieu, beautiful damsel in distress, larger-than-life prototype of masculinity, smoldering love at first sight but with lots and lots of ordeals ahead.

I rarely read such novels, so I was expecting pure seduction and passionate froth.  Joanna Bourne, however, surprised me.  Her characters are complicated, neither shallow nor predictable.  Marguerite, it turns out, directs an underground service to conduct men, women, and children endangered by the French Revolution out of the country.  Code named La Fleche, she oversees an intricate network of safe houses and conduits from Paris to the ocean and on to England.  She is thoroughly competent, and well-schooled as well.  William Doyle is not the innocent country bumpkin he appears to be, but is a man of many disguises and talents.  Together, they travel the French countryside to Paris, with countless close calls and close embraces along the way.

Paris brings no sanctuary to the pair, as they separate, come back together, separate, unite again.  The plot, it seems to me, accurately follows the rhythms of Robespierre’s power plays and subsequent demise.  The story exudes truth, although the participants aside from Robespierre are all imagined.  The secondary characters are drawn with equal finesse.  My favorites were the loyal sidekick, Hawker, a refuge from the criminal underworld of London, and Madame Cachard, the iron-grey disciplinarian who rules the British spy system in Paris with a decisive hand.  I also enjoyed the evil cousin, Victor, who tries to play both sides of French politics while helping himself to the de Fleurignac fortune.  And then there is Marguerite’s father, an off-kilter aristocrat whose scientific propensities and manic activities get in the way of his own safety, not to mention his daughter’s well-being.

Bourne not only weaves history into her fiction, but she adds literature and art, too. William turns out to have a Cambridge degree in the classics, while Marguerite has read far more than one might expect, given her years mingling with courtiers and royalty.  Their conversations are never dull.  Bourne is never heavy-handed with her allusions, either, and she sometimes has fun with her writing.  For example, the two donkeys who accompany Doyle and Hawker everywhere have prescient names: Dulce and Decorum.  Need I say more about this delicious novel?  It is what it is, but with a wonderful overlay of smarts that I found thoroughly charming.   – Ann Ronald

Also available by Joanna Bourne: The Black Hawk; The Spymaster’s Lady; My Lord and Spymaster; The Rogue Spy; Her Ladyship’s Companion. 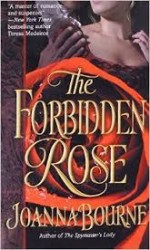 Ann Ronald is a retired English professor from the University of Nevada, Reno. Author of dozens of reviews, she’s also written a number of books about the American West. They include literary studies such as The New West of Edward Abby and Reader of the Purple Sage, cultural studies such as GhostWest and Oh, Give Me a Home, and nature writing such as Earthtones: A Nevada Album. Her latest is a work of fiction, Friendly Fallout 1953. Since retiring, she’s been reading vociferously, so “Bookin’ With Sunny” is giving her a wonderful opportunity to share thoughts about her favorite new discoveries.
More from this reviewer
PrevThe Immortal Life of Henrietta Lacks
Circling the SunNext