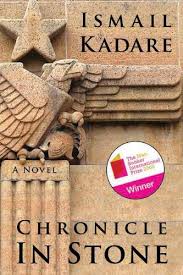 Kadare’s intriguing novel is the first I’ve read by an Albanian. It is set in World War II and narrated by (I’m guessing) a ten or eleven year-old boy. He lives in an unnamed Albanian city close to the Greek border, an area contested militarily by Italians, Greeks, and Germans, and bombed by the British. Even for those like me who seem always to be reading World War II histories, memoirs, and novels set in out-of-the way places like Papua-New Guinea or the Palau Islands, this one struck me as being about a truly strange, fascinating place. This may be the first Ismail Kadare novel I’ve read but it won’t be the last. Albania rocks!

The unnamed city is an ancient one, dating to pre-roman times. For more than two thousand years, it has experienced numerous invasions, conquests, and settlements. It has adopted and sustained a plethora of political and religious regimes but always its stone houses and public buildings have endured, although not always entirely in tact. Now, in 1939, its stone minarets push into the rainy, gray sky giving a metaphorical middle finger to its current set of would-be overseers. It isn’t clear whether the Italians or the Greeks are the greater enemies of the Albanians; later it will be apparent, however, that the blonde Germans are the most foreign. In this mostly Muslim city, the invaders are all Christians of one sort or another, but rape, pillage, religious crusading, and senseless brutality are not a significant part of the story. Even when the Germans begin shelling the town in late 1943, they cease when one of the resisters briefly waves a white flag. They are no worse than the Italians or Greeks before them.

For the child narrator, the war is one more experience that initially seems part of the fabric of ordinary life. The war is certainly important for him but so too are the first stirrings of his sexual awareness, the strong disapproval by his aunts when a family member begins to wear glasses, a girl whose family keeps her indoors when she grows a beard, another girl who may have been thrown down a well when discovered kissing a boy in a bomb shelter, and his grandfather’s collection of Turkish books. And even though his family home’s basement becomes a temporary bomb shelter, the boy’s resilience and sense of normalcy, while tested, do not appear to be in jeopardy. Later, most of the city’s denizens become refugees and flee to the countryside for a period of time, but he finds the openness, the naturalness, and the peasant-farmers there to be mildly threatening and disorienting. By contrast, the lapidary qualities of the city attract him and provide him with reassurance even as people are shot, hung, or blown up.

Chronicle in Stone, as suggested by its title, is more about the city and its citizens than about what happens to it and them, more about what endures than what changes. It is as though the city in stone is impenetrable in some respects. Even when its houses and buildings are being destroyed by bombs and artillery shells, the city’s essence somehow endures. Even the child narrator doesn’t seem to grow much older during the four or five years of his life that the novel encompasses. He remains forever prepubescent, just on the cusp of adolescence.

When returning to the shattered city after being a refugee he sees Kako Pino hung from a tree. Mistaking her as a bomb maker, the Germans have executed her for no reason. In reality, this family friend makes up brides before their weddings and was on her way to ply her profession. The boy’s mother asks, “Are people still getting married in times like these?” His grandmother answers, “People get married in all times.” Some things just don’t change, war or no war. – Neal Ferguson

Also available by Ismail Kadare: The General of the Dead City; Broken April; The Palace of Dreams; The Pyramid; The Fall of the Stone City; The File on H.; Twilight of the Eastern Gods; Doruntine; Spring Flowers, Spring Frost, The Three Arched Bridge; The Ghost Rider; The Concert; The Castle; Agamemnon’s Daughter; Three Elegies for Kosovo; The Accident. 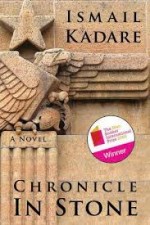 Neal Ferguson is a self described Anglo-phile. After studying for a PhD in British history and doing research for a year in various British archives, he came to the University of Nevada in 1970 to teach. Soon he found himself in administration where he remained until 2003. After returning to full-time teaching a decade ago, he decided to concentrate his teaching energies on Medieval British history and various global aspects of World War II. Dedicated to Ambrose Bierce’s proclamation that the purpose of war is to teach Americans geography, Neal insists that his students accompany him (in class) to sundry east European rivers and steppes, African deserts and jungles, south-east Asian mountain ranges and peninsulas, and small islands and coral reefs in the Pacific. Currently he is writing a book about the ups and downs of General Douglas MacArthur’s military reputation.
More from this reviewer
PrevTallgrass
The Bookman’s TaleNext