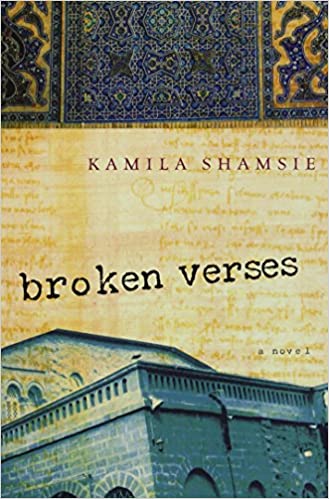 Kamila Shamsie’s enigmatic novel, Broken Verses, explores a number of thematic issues that are specific to Pakistan but equally reflective of the world in general. Set in Karachi, Broken Verses considers Pakistan’s late twentieth-century political unrest as viewed, debated, and inflamed by members of the Pakistani intellectual class. The reader, in fact, learns few specific details about the ongoing religious and political upheavals themselves. Rather, the novel’s focus lies with the talkers and thinkers whose ideas swept through the country during several turbulent decades.

Broken Verses is filtered through the imagination of Aasmaani Inqalab, whose mother was an outspoken feminist. Her mother’s lover was a highly-esteemed Pakistani poet. After his vicious murder in 1986, her mother never recovered her activist posture. Instead, she sank into a deep depression. Two years later, she disappeared, leaving Aasmaani to wrestle with what her mother and the Poet actually accomplished. All that talk, all that energy, all that love—dissipated for no apparent reason. Yes, their passions excited other people. But in truth, their passions destroyed them without effecting much critical change.

Seventeen years later, Aasmaani takes a new job at a Karachi television station. For years she has bounced from one possible career to another, from one love to the next. Unable to settle down and unable to put her past behind her, Aasmaani is still wrestling with the Poet’s brutal death and her mother’s subsequent disappearance. In her new position and under mysterious circumstances, however, Aasmaani learns unexpected information that leads to the heart of Broken Verses. The novel moves seamlessly between Aasmaani’s present and her imagined past as she searches for evidence to reconstruct what really happened to the Poet, to her mother, and even to her younger self.

At the same time, Aasmaani’s other family lends stability to her life and little credence to her imaginings. Aasmaani’s parents were married only briefly, and indeed they separated months before she was born. Her father remarried, and her stepmother is the soul of patience and love. Their daughter, Rabia, Aasmaani’s half-sister and also her best friend, is a gem, too. Their ongoing presence (Rabia and her husband rent rooms to Aasmaani, so they regularly interact) provides a sense of constancy to a world that increasingly feels inconstant to Aasmaani.

Thematically, Rabia, her husband, and her parents offer a stark counterpoint to the roles played by the Poet and Aasmaani’s mother. They are always physically there, while her mother and the Poet would vanish. In fact, for years before his death, the Poet was often exiled, and Aasmaani’s mother would follow him wherever, leaving her daughter behind. Perhaps inviting her to visit on occasion; perhaps not. Repetitively feeling abandoned, Aasmaani never came to terms with her childhood terrors and fears for her mother’s and the Poet’s safety. Ultimately this stress fracture becomes even more thematically important than the questions about the intelligentsia’s political prowess. How much does a prominent activist mother owe her only child?

Ultimately, then, Broken Verses is about two things. Parental relationships with their children is the most important ingredient in this superbly thoughtful novel, as is abandonment and all the various shades of love. Political activism is important, too, but plays an increasingly tangential role as the plot of Broken Verses develops. Interestingly enough, we hardly see the politics directly. We see the politics filtered through Aasmaani’s sensibility. Likewise, we only see her mother, her father, her stepmother, the Poet, Rabia as filtered through the membrane of Aasmaani’s mind. A very fine mind it is, however. Sometimes acutely perceptive, sometimes deeply mistaken, always quite fascinating to behold.  –  Ann Ronald 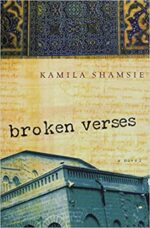 Ann Ronald is a retired English professor from the University of Nevada, Reno. Author of dozens of reviews, she’s also written a number of books about the American West. They include literary studies such as The New West of Edward Abby and Reader of the Purple Sage, cultural studies such as GhostWest and Oh, Give Me a Home, and nature writing such as Earthtones: A Nevada Album. Her latest is a work of fiction, Friendly Fallout 1953. Since retiring, she’s been reading vociferously, so “Bookin’ With Sunny” is giving her a wonderful opportunity to share thoughts about her favorite new discoveries.
More from this reviewer
PrevThe Second Home
Overground RailroadNext