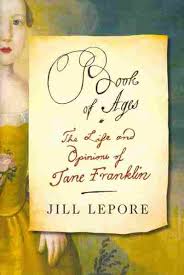 Book of Ages: The Life and Opinions of Jane Franklin

Virginia Woolf, writing A Room of One’s Own, invented a sister for Shakespeare. Judith Shakespeare, equally as bright as William and equally gifted, was doomed by her gender and by her culture’s expectations of a woman’s lot in life. So, too, the real-life sister of Benjamin Franklin was fated to follow a very different path than the one her famous brother took. Jill Lepore, by digging deeply into Franklin family letters and relevant historic documents, has reconstructed the life of Jane Franklin Mecom. At the same time, Lepore has drawn a graphic picture of American life in late eighteenth-century Boston.

Jane was Benjamin Franklin’s youngest sister. The two outlived their siblings, all fifteen of them. Franklin’s life is well-known; Jane’s is not. Pregnant at the age of fifteen, mother of twelve, married to a dead-beat husband, caretaker of her aging parents, caregiver as well to countless grandchildren and great-grandchildren, Jane struggled to tend to everyone’s well-being. Details of her early life appear in her “Book of Ages,” a diary that enumerated births and deaths, a four-page archive of children born and buried. Apparently she was a prolific letter-writer, too, although none survives from her early years,

She kept her brother’s letters, however. A sporadic correspondence at first, the two apparently wrote regularly after her children were grown and after Franklin’s reputation and renown were well-established. Jane wrote letters to her friends, too, and a few of those remain available to present-day researchers. So Lepore was able to surmise a great deal about Jane’s personal circumstances. A remarkable historian, Lepore also was able to flesh out Jane’s historic milieu. We learn, from Book of Ages, not only Jane’s history but also what was happening in colonial Boston and wherever Jane’s brother’s multiple endeavors were taking him. The result is a fascinating cultural study of New England and the nascent United States of America.

Like her brother, Jane loved to read. In her later life, she pursued her own course of learning, asking her brother for lists of books and borrowing whatever she could find. Uneducated (Lepore retains Jane’s spelling eccentricities in order to give the full flavor of her words) but curious and obviously very bright, Jane perused English history and European philosophy, poetry and novels. Thus, she is an almost archetypal example of Shakespeare’s imaginary sister, a woman of enormous intellectual gifts who was relegated to a narrow, pre-determined gendered role.

Writing Book of Ages, Lepore achieves many goals. The first, of course, is to tell the story of Jane’s life. The second is to describe and analyze an historian’s methods, how to dig into a person’s past when few documents are available. Third, she gives her reader a portrait of the times, an in-depth look at how men and women actually lived in their colonial world. Fourth, Book of Ages is a careful study of gender. Lepore regularly quotes Abigail Adams, who urged her husband to include women in the founding fathers’ documents. Jane’s life exemplifies the way so many women at the time were mistreated, patronized, and ignored.

Benjamin Franklin didn’t ignore his sister, however. From afar, he looked after her welfare as best he could, sending money, setting numerous relations on various career paths, even buying a house where Jane could live out her final years. From the tone of his letters, he respected his sister’s mind, too, though he recognized that she lacked education and polish. On the other hand, in his own very famous autobiography, Jane’s name never appears, not once. And thus Jill Lepore’s chief argument is proven—in those days, women were written out of history.    – Ann Ronald

Also available by Jill Lepore: The Secret History of Wonder Woman; The Whites of Their Eyes; New York Burning; A is For American; The Name of the War. 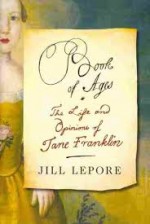 Ann Ronald is a retired English professor from the University of Nevada, Reno. Author of dozens of reviews, she’s also written a number of books about the American West. They include literary studies such as The New West of Edward Abby and Reader of the Purple Sage, cultural studies such as GhostWest and Oh, Give Me a Home, and nature writing such as Earthtones: A Nevada Album. Her latest is a work of fiction, Friendly Fallout 1953. Since retiring, she’s been reading vociferously, so “Bookin’ With Sunny” is giving her a wonderful opportunity to share thoughts about her favorite new discoveries.
More from this reviewer
PrevWilderness and the American Mind
Mantan the FunnymanNext