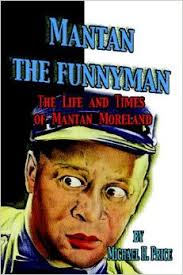 Mantan the Funnyman, The Life and Times of Mantan Moreland

Mantan Moreland was a comedian and actor in old-time movies and was usually seen playing a porter, chauffeur, valet, or general servant. These roles are not much different from those played by other African-American actors at the time, such as Stepin Fetchit (Lincoln Perry), Willie Best, or Clarence Muse. These were typical, demeaning parts played for the kind of low comedy that we think of today as insulting racial stereotypes. The performers were asked to wring humor out of exaggerated laziness and plain stupidity. They did as they were told. It was work. After all, as Oscar-winning actress Hattie McDaniel said, “I’d rather play a maid than be one.”

Mantan Moreland (1903-1973) was different. Sure, he was a comedian usually cast as a servant, but his humor was defiant, anything but servile, Moreland’s humor operated on multiple levels. His role may have been lowly, the dialogue he was given idiotic, but you always had the sense that he was laughing at it all.

Nowhere is this more evident than in the 1941 horror flick King of the Zombies. It’s a grade C effort produced by indie Monogram Pictures. Mantan rolls his eyes and makes his mouth a circle, but when asked to join a crew of zombie slaves, he lines up and blurts, “Move over boys. I’m one of the gang now.” It gets a quick laugh, but there’s something subversive behind this insolent crack. Later in the film, he quips, “If there’s anything I wouldn’t want to be twice, zombies is both of them.” Again the English is fractured, but this is a servant speaking far ahead of his time.

Mantan the Funnyman is written by Texan Michael H. Price. In his work, he comments on ironies as the segregated south moves through the 20th century. Price is probably best known for his book Forgotten Horrors: Early Talkie Chillers From Poverty Row (1979). That book has been revised and is now the first of five volumes. These are studies of alternative cinema from the 1930’s through the 1950’s.

Meanwhile, back to Mantan Moreland. who was born Jesse James Brodnax in Monroe, Louisiana. Around 1950, after two decades of defiant comedy, Mantan is declared persona non grata, not by white bigots angry at his uppity attitudes. No, it’s the N.A.A.C.P. which declares that Mantan and so many of his contemporaries promote racial stereotypes no longer in line with current thinking. The funnyman is essentially blacklisted, not because he was a communist (he wasn’t), but because his comedy didn’t meet new standards of racial purity. At about this time, his health begins to fail, and he is only able to work sporadically after that.

Price enlists Mantan’s daughter, Marcella Moreland, to tell the more personal story. The resulting book is an astonishing blend of upside-down history. As the country moves into the civil right era, Mantan is pushed aside and made irrelevant by the very forces that should have cheered him on. This powerful if ironic message makes Mantan the Funnyman essential reading.

The second half of Mantan the Funnyman is a filmography which charts Moreland’s work in the later Charlie Chan series. We also learn that while playing bit parts for Fox, M-G-M, and Universal, Mantan had star parts in many of the “All Negro Cast” pictures produced independently for black audiences in segregated neighborhoods. These films were ignored in their day by the mainstream press and even the Hollywood trade papers. Amazingly, some of these films still exist, thanks in no small part to painstaking research by people like Price. You can purchase DVD’s from distributors mainly in the South.

Mantan the Funnyman is recommended to anyone interested in the complete history of race relations in cinema and in this country. Once you begin to see the bigger picture, you too can say, “Move over boys. I’m one of the gang now.”   – Dan Erwine 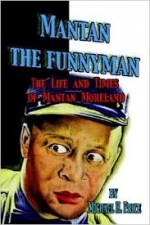 Dan Erwine holds a BS in Telecommunications, San Diego State University. Dan recently retired after four decades in radio broadcasting. His background San Diego stations KFSD and NPR's KPBS, and KUNR, Reno, NV. Over the years, Dan has produced and hosted a number of talk shows and interviewed over five thousand writers in almost every genre and career, from such notables as David Brin to Seamus Heaney, Allen Ginsberg, Judy Collins, Charlton Heston and Wally Schirra. Dan is a comic book aficionado and has a special interest in film, science fiction and mystery. He lives with his wife in Reno, NV.
More from this reviewer
PrevBook of Ages
Yankee Broadcast NetworkNext