Blood of the Prodigal 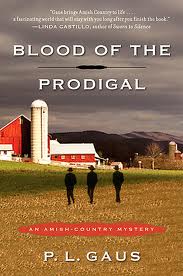 If you have seen many of my “Bookin’ with Sunny” reviews, you’ll know I prefer books that not only are delightful to read but that also teach me something. I want to learn about a historical period or a culture, or about art or music, or about ethnicity or politics. I just want my mind stretched, even when I read murder mysteries. That’s why I’m recommending P. L. Gaus’s Blood of the Prodigal. Before reading the book, I knew very little, other than some superficial generalities about beards and buggies, regarding Ohio’s Amish communities. By no means did Blood of the Prodigal make me an expert, but it did explain the sense of community, the abiding faith, and the social mores of these small Midwestern religious congregations. I use the plural of congregations on purpose, because that’s one of the things I learned. The Amish are not all the same. Each separate congregation functions autonomously within the larger whole, operating under varying degrees of liberal allowances or conservative strictures. Blood of the Prodigal focuses on one of the most restrictive groups, a clannish Amish family with a powerful and rigid father.

Ten years before the novel begins, the Miller family patriarch cast out his son, Jonah, banning him because of his carousing behavior. Now Jonah has apparently returned, kidnapping his own son, a ten-year-old boy who has been thoroughly indoctrinated in conservative Amish ways and who doesn’t know his father. Jonah leaves a note, explaining that he will return the boy in time for harvest. To find both his son and his grandson, Bishop Miller enlists the aid of two non-Amish neighbors, trusting them rather than the sheriff and making them promise to make their inquiries circuitously and as subtly as possible. For the rest of the novel, the outsiders (who grew up nearby but who are not of the Amish faith) move in and out of Amish society, gradually learning Jonah’s history and also discerning hitherto unknown complexities of Amish Ohio.

Before long, one of the two leaves to attend a conference, so the other enlists the aid of his wife to interview people and to unravel relationships and histories they don’t initially understand. When Jonah’s body is found, the law enters the story and the mystery deepens. Bishop Miller and his family are keeping secrets from Michael and Caroline Branden who themselves must keep secrets about their investigation from the sheriff and his deputy and ultimately from the F.B.I. What makes the narrative so puzzling is the way Gaus manipulates the revelations, offering in-depth insights into Amish life while at the same time maintaining their privacy and their religious boundaries.

Blood of the Prodigal is an inside-outside novel. At times the Amish customs are so in the forefront that the action almost disappears. Details about Amish dress and lifestyle and environment and education and even their choice of colors emerge. The way a man dresses in important; how he shaves his beard turns out to be a crucial clue. Despite all the intriguing external information, the reader never truly gets inside an Amish character, never hears Jonah’s voice or sees him in action. So reading the novel is very like experiencing the Amish culture from afar, always outside, never in. Nonetheless, I learned a lot that I didn’t know before. To read Blood of the Prodigal is to acquire new knowledge of a particular kind of biblical ethnicity. I enjoyed the lesson.

It turns out that P. L. Gaus has published six Amish mysteries. Blood of the Prodigal was the first. The others have been revised and updated and reprinted as the Amish-Country Mysteries by Plume, a division of Penguin Group USA. A seventh novel will soon appear, with an eighth to follow. So it is possible for a reader to immerse herself even more deeply in this deeply private culture. For more information, see Gaus’s webpage: http://www.plgaus.com.                             -A.R.

Also available by P. L. Gaus: The Names of our Tears; Harmless as Doves; Separate from the World; A Prayer for the Night; Cast a Blue Shadow, Clouds without Rain; and Broken English.

Ann Ronald is a retired English professor from the University of Nevada, Reno. Author of dozens of reviews, she’s also written a number of books about the American West. They include literary studies such as The New West of Edward Abby and Reader of the Purple Sage, cultural studies such as GhostWest and Oh, Give Me a Home, and nature writing such as Earthtones: A Nevada Album. Her latest is a work of fiction, Friendly Fallout 1953. Since retiring, she’s been reading vociferously, so “Bookin’ With Sunny” is giving her a wonderful opportunity to share thoughts about her favorite new discoveries.
More from this reviewer
PrevSafekeeping
The Black CountNext