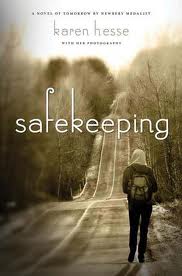 It is exciting when a new book from Newbery Medalist Karen Hesse hits the bookshelves of stores and libraries (though it is a little daunting to review a book for teens when it has been more years than I care to count since I was one). That confession out of the way, I believe Safekeeping is the perfect read for American teens just as we prepare for our general election. If I were a parent, I would almost insist that (yes, I know, that is the very thing to turn any reader off) my teen read Safekeeping before or shortly after November 6th. It may be, as the cover says, a “Novel of Tomorrow,” or even a speculative or dystopian novel, but all things considered, it is just as much a novel of today.

Radley Parker-Hughes is a seventeen-year-old American returning home to Brattleboro, Vermont after volunteering at an orphanage in quake-ravaged Haiti. It is not a happy homecoming. The newly elected President of the United States has been assassinated and, from what sketchy news has reached Haiti, it has been decided for Radley that she should return home to her parents, to meet them at the airport in Manchester, New Hampshire.

Everything that can’t fit into Radley’s backpack, clothing and toiletries, is left for the children at the orphanage where she has been volunteering. A message has been sent to her parents to meet her at the airport in Manchester, New Hampshire, but her plane is rerouted and instead lands in Philadelphia, Pennsylvania, the home of the Liberty Bell. She is met by soldiers and U.S. Marshals and no assurance that she will board another plane home anytime soon. What makes this beginning so believable is Radley herself. She is not some saintly teen giving of her time in Haiti, and in this first person narrative, she admits she left her clothing and toiletries, not out of charity, but out of the realistic expectation that whatever she left in Haiti will be quickly replaced by her loving parents. She is certain that when she catches up with them, they will explain everything; her parents will make sense of it all. It is an ominous insight.

Eventually she flies out of Philadelphia and lands in Manchester. Once again, she is met by soldiers and frightening quiet. Her parents are nowhere to be found. She waits, but they never arrive at the airport to drive her home. She calls home from a public phone (having left her cell phone’s charger back in Haiti), but a recording informs her that the number she has dialed is “no longer working.” Having no travel papers, she decides to walk from Manchester, cross the state line into Vermont, and then to Brattleboro and home. There she finds no answers at all. The house is empty and her parents are missing. Radley thinks about their politics and fears for their lives. Her parents were much opposed to the party that has taken over the government and she recalls that they had warned her “…that all hell would break loose once the APPs took power.” She knows that groups of people have been rounded up and removed and may never be seen again. If her parents have been taken, Radley’s fear that soldiers may also be looking for her, is not far-fetched.

For the first time in her young life, Radley must fend for herself. The police and military seem to be everywhere, strangers do not speak, and once she leaves behind the Fox news broadcast at the Philadelphia airport, news of any sort is dicey at best. She finally decides to leave Brattleboro and head to Canada. She becomes a scavenger for food, learns to hide from any cars on the road (crossing state lines is now illegal without papers) and avoids all but the most necessary contact with other people. Hesse’s use of first person narrative is most effective. Certainly the particular events that occur to Radley as she treks to Canada are important to the story, but even more important are her thoughts as everything she has ever known and trusted is literally upside down. She might as well be Alice tumbling down her own terrifying rabbit hole.

Along the way, she meets another young woman (just a few years older than herself). They accompany each other all the way to Canada but it takes them a long while to really become companions. They are slow to realize how much they have to learn from each other, but by the time they reach Canada and find an abandoned schoolhouse to make their own, life almost appears to begin again.

Throughout the novel, the author has included black-and-white photographs of the countryside and interior and exterior shots of buildings. The range of images is remarkable and adds to the tension of the story. The pictures are peaceful, emotional and suggest the exact opposite of Radley’s state of fear and loss. I found the inclusion of the photographs evocative and not at all distracting. The use of all manner of illustrations is returning to serious fiction and not at all relegated to picture books. Umberto Eco, C.W. Sebald, Kurt Vonnegut, Jonathan Safran Foer and Alex Garland are but a few authors whose novels have included illustrations.

Safekeeping is a book the whole family can read and it would be great fodder for some lively dinnertime conversation. Hesse’s use of Fox News as the only news broadcast at the Philly airport and her naming the insurgents the APPs (actually meaning American People’s Party) cannot be unintentional.

Radley may have walked all the way to Canada, but her most important journey was inward, a journey of self-discovery. Her story comes full circle as governmental order has been restored in the United States and, confident she can face whatever will or will not be waiting for her, she returns home. Hesse’s handling of Radley’s homecoming is both sad and hopeful and becomes another first step on a journey that will take a lifetime.   – Sunny Solomon

Sunny Solomon holds an MA in English/Creative Writing, San Francisco State University. She is a book reviewer for “The Clayton Pioneer” and her poetry and other writing has been published in literary journals, one chapbook, In the Company of Hope and the collection, Six Poets Sixty-six Poems. She was the happy manager of Bonanza Books, Clayton, CA and Clayton Books, Clayton, CA. She continues to moderate a thriving book club that survived the closure of the store from which it began. Sunny currently lives next to the Truckee in Reno, NV.
More from this reviewer
PrevThe Boxcar Children Beginning
Blood of the ProdigalNext