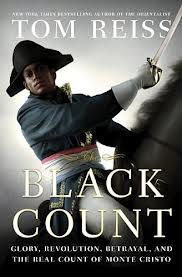 At the end of his historical biography of General Alex Dumas, The Black Count Tom Reiss cites a passage written by the General’s famous son. “’You see, Father,’ he [Alexander Dumas, author of The Count of Monte Cristo] writes in his memoir, as if for himself, ‘I haven’t forgotten any of the memories that you told me to keep. From the time I could think, your memory has lived in me like a sacred lamp, illuminating everything and everyone you ever touched, even though death has taken it away!’” The literary son adored his military father, and Tom Reiss wants to explain why. The Black Count narrates the triumphs and travails of this once famous Frenchman whose career for a time paralleled that of his colleague and then his commander, Napoleon Bonaparte.

The son of Alexandre Antoine Davey, the Marquis de la Pailleterie, and a black slave, General Alex Dumas was born in Saint-Domingue, a French colony on the western end of Hispaniola. His father, a ne’er-do-well wastrel, sold his son and the boy’s mother with the understanding that he could buy them back some day. When the boy was twelve, he was redeemed and taken to Paris where, ironically, his father treated him to a classical military education and introduced him into the highest aristocratic French circles.

The biracial general apparently was successful at everything he tackled, excelling at his studies, his military training, and his role in society. During the years of the French Revolution, he rose rapidly through the ranks. Reiss meticulously details the general’s career, tying his escapades closely to the history of the times. Those military adventures climax in Egypt, where Napoleon attempts an ill-advised invasion and occupation, and where General Dumas becomes increasingly frustrated with French foreign policy. He resigns from the army, only to be imprisoned in Naples for two full years. If his story sounds like the seeds of The Count of Monte Cristo—wrongly imprisoned for unknown reasons, kept in isolation, unable to communicate with family and friends—that supposition would be correct. Although the son transforms and transcends his father’s trials, he nonetheless took his inspiration from his father’s past.

Tom Reiss’s job is to make the general come alive, no easy task given the dearth of first-person materials. He uses the son’s memoir, plus allusions to parts of Dumas novels where events imitate life. Significantly, Reiss also uses his own research experiences to flesh out the history. An ancient safe at Villers-Cotterets must somehow be opened; a cameo portrait reveals the fine figure the swarthy general must have cut; the whole history of French racism must be carefully excavated. In many ways, The Black Count exemplifies narrative scholarship, where the conversational author becomes a part of the story, bringing distant people and places to life. Reading the book is a fine exercise in reliving a remarkable time in French history. Written for an ordinary reader, not a scholarly audience, The Black Count: Glory, Revolution, Betrayal, and the Real Count of Monte Cristo nonetheless offers an in-depth historic overview. It also fulfills the general’s son’s vow that his father should never be forgotten.                                   – Ann Ronald

Also available by Tom Reiss: The Orientalist: In Search of a Man Caught Between East and West.

Ann Ronald is a retired English professor from the University of Nevada, Reno. Author of dozens of reviews, she’s also written a number of books about the American West. They include literary studies such as The New West of Edward Abby and Reader of the Purple Sage, cultural studies such as GhostWest and Oh, Give Me a Home, and nature writing such as Earthtones: A Nevada Album. Her latest is a work of fiction, Friendly Fallout 1953. Since retiring, she’s been reading vociferously, so “Bookin’ With Sunny” is giving her a wonderful opportunity to share thoughts about her favorite new discoveries.
More from this reviewer
PrevBlood of the Prodigal
The Devil In SilverNext