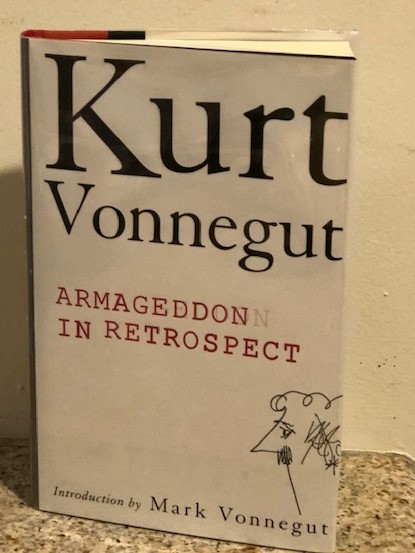 It is never too late to begin or to continue reading Kurt Vonnegut, especially Armageddon In Retrospect.

One of the marvels about Kurt Vonnegut is that it is never too late to read him, no matter the reader’s age. I was in my late thirties before I read Vonnegut, and even then, it was Galapagos, not Slaughterhouse-Five, his now classic WWII novel/memoir of the US bombing of Dresden, Germany. It wasn’t that I had not heard of him. I remember seeing my parent’s Book-of-the-Month-Club edition of Cat’s Cradle when I was a kid, but it was on their bedroom bookshelf, which meant it was not for family reading, and, at that time, I was still an obedient child. And so, it’s not too late for Armageddon In Retrospect.

I was a literary late bloomer when I returned to college in my early forties. Now, about forty years later, I have acquired a stash of Vonnegut books that offer themselves like treats when the world around me needs replenishing. Yesterday was such a day. The heat wave continues, Ukraine, without ceasing, defends itself against Russia, Iraqi women are once again prohibited from education, and worst of all, my new bishop has removed the “All are Welcome” and “Black Lives Matter” signs from the front doors of my Catholic church in Reno.

Armageddon in Retrospect seemed most appropriate to pull off the shelf. I poured a cold glass of Rosé (orée des roses), settled into one of my favorite reading chairs, and fell in love with Vonnegut all over again.

Indiana’s most famous author is not a difficult read. Let’s face it, he’s not Proust, but he’s no lightweight either. Armageddon In Retrospect is a collection of stories, essays, letters, and drawings, beginning with an introduction by Mark Vonnegut, the author’s son. The introduction is followed by a photocopy of a May 29, 1945, letter written by Vonnegut, from a Red Cross Repatriation Camp in Le Havre, explaining to his parents that he was not, in fact, missing in action.

Next comes a speech written for the opening of Indiana’s Year of Kurt Vonnegut, 2007. However, Vonnegut died before the event, and the speech was read by his son Mark. The last words of that speech are perfect Vonnegut: “And I thank you for your attention, and I’m out of here.” Vonnegut does not waste words in making his points. From an essay about the purpose of his military basic training: “Men, up to now you’ve been good clean, American boys with an American’s love for sportsmanship and fair play. We’re here to change all that.” The lieutenant continued in regard to the enemy: “Make the bastard scream. Kill him any way you can. Kill, kill, kill, do you understand?” Unknown to that lieutenant is the fact that Vonnegut would spend most of his WWII time as a POW, cleaning up the human detritus of the American bombers’ annihilation of Dresden, Germany, an insane military target but one ripe for revenge. This piece closes on the author’s discomfort in accepting congratulations for such destruction: “. . . I felt then as I feel now, that I would have given my life to save Dresden for the World’s generations to come. That is how everyone should feel about every city on Earth.”

Vonnegut’s art (pictures or brief words and a picture) precedes each story or essay in Armageddon in Retrospect and involves our insatiable inhumanity, our inborn propensity to place a high value on violence and deceit, and our firm willingness to not recognize either.

The last story, Armageddon in Retrospect, weaves a fictional event of Biblical roots and factual folks leading the way to the Devil’s (scapegoated for human misbehavior) personal return and ultimate death. The scientific and spiritually thought-out event is as explosive as is its nutso methodology. According to The Book of Revelation, Armageddon is our future. All manner of catastrophe will occur before the end of our world (the destruction of the Devil) and the beginning of The New Jerusalem. Our future? In retrospect, the reader might surmise that Kurt’s stories, remembrances, and essays suggest something entirely different. When thinking of Dresden, the Holocaust, or Hiroshima, it would appear that our future already has a past. Armageddon in multiples?

Can Vonnegut’s Armageddon In Retrospect with its depth of humanism from a life before and after WWII, be relevant to millennials and Gen Z readers? They may not remember WWII from their great-grandparents or Vietnam from their grandparents, but surely they are not too far from our endless wars in the Middle East—Iran, Iraq, Afghanistan. How about Ukraine’s Armageddon? Close enough?  – Sunny Solomon 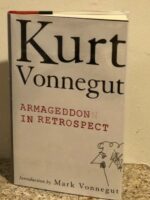 Sunny Solomon holds an MA in English/Creative Writing, San Francisco State University. She is a book reviewer for “The Clayton Pioneer” and her poetry and other writing has been published in literary journals, one chapbook, In the Company of Hope and the collection, Six Poets Sixty-six Poems. She was the happy manager of Bonanza Books, Clayton, CA and Clayton Books, Clayton, CA. She continues to moderate a thriving book club that survived the closure of the store from which it began. Sunny currently lives next to the Truckee in Reno, NV.
More from this reviewer
PrevTahoe Moon
The Sisters of VersaillesNext