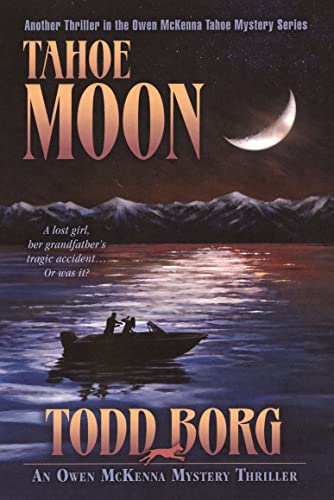 Tahoe Moon – We know summer is upon us as Todd Borg’s Owen McKenna takes center stage. Mystery-thriller fans will not be disappointed. McKenna is back!

For all you mystery-thriller fans who happen to love Lake Tahoe and Todd Borg’s Owen McKenna, hold onto your hats; McKenna is back! In Tahoe Moon, as in all Borg’s mysteries, the first dead body appears within three pages of the book’s Prologue. In this case, a part-time woodsman is gruesomely flattened to death by the tree he was sawing down. Mystery number one.

Borg’s prologues are brief: setting, action, dead body. Okay, on to Chapter One where we meet retired SFPD detective Owen McKenna on his way into a fancy-schmancy Lake Tahoe hotel, but don’t forget every little detail of Tahoe Moon’s prologue. While walking to the hotel, McKenna’s heartstrings are touched when he sees a sad, forlorn looking little girl with a skateboard tucked under her arm. She looks lost. McKenna passes her and enters the hotel to meet a Mr. Rossi of Rossi & Dexter. Rossi is obnoxiously real, while an absent Dexter is strangely fictitious. McKenna is interviewed to head up a security team for Mr. Rossi, a job as fictitious as Mr. Dexter.

Returning from the hotel he looks for the young girl to see if she needs help. He finds her still sad and forlorn. The girl is eight-years-old: deaf, reads lips, signs, and talks in a deaf-speaking voice. She is waiting for her grandfather, a sometimes wood cutter, to come back from a job. McKenna calls his longtime friend Sgt. Santiago for help. He also calls his longer-time girlfriend, Street, hoping her female presence will help as well. And, oh, yes, the little girl (Camille) is waiting for her beloved Grandpa Charlie, Charlie Dexter. Never start a McKenna mystery in the afternoon as you’re likely not to get to bed until very early the next morning; Tahoe Moon is no exception.

Borg’s clue-dropping talent whets our appetites to guess nonstop who killed the woodsman. Is there a connection between Camille’s Grandpa Charlie Dexter, Mr. Rossi’s fictitious Mr. Dexter, and the dead woodsman? Is the woodsman’s death murder, suicide or accident? Is there a link between the woodsman’s death and other bizarre deaths happening for some time in the Tahoe region? Could Camille be next? What possible connection might these disparate “accidental deaths” have? And, what about that Tahoe Moon?

Now we’re deep into Borg territory of chases so detailed the reader feels each turn of the wheels between car and skateboard—on and offroad, each punch and rib-cracking blow in brutal fist-a-cuffs, and exactly how deep into flesh does Spot (McKenna’s faithful Harlequin Great Dane) bite to hold down a bad guy. We’re kept guessing as the “who” seems to emerge, but the “why” is something else. All the while, we learn about the deaf world, the market for stolen catalytic converters, the fascinating world of skateboarding, specifically longboarding, the history of ghost artists (writers, painters, composers), insurance fraud, the dark web, and the difference between amateur hired killers and professional hitmen.

And will Tahoe Moon reveal just how deeply McKenna’s and Street’s heartstrings have been touched by the now orphaned Camille? Is a foster family or adoption in her future? I won’t say more but McKenna is back, big time. 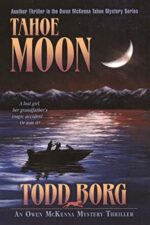 Sunny Solomon holds an MA in English/Creative Writing, San Francisco State University. She is a book reviewer for “The Clayton Pioneer” and her poetry and other writing has been published in literary journals, one chapbook, In the Company of Hope and the collection, Six Poets Sixty-six Poems. She was the happy manager of Bonanza Books, Clayton, CA and Clayton Books, Clayton, CA. She continues to moderate a thriving book club that survived the closure of the store from which it began. Sunny currently lives next to the Truckee in Reno, NV.
More from this reviewer
PrevThe Vanishing Half
Armageddon In RetrospectNext