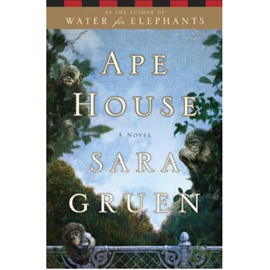 For all you Sara Gruen fans who have been patiently waiting for her first novel since Water for Elephants, wait no longer.  Ape House is here and Gruen has outdone herself in this, her fourth novel.

It’s not hard to pin down exactly why this lively, fresh, funny, politically correct, and sometimes over the edge novel is going to be at least as popular as Water for Elephants. It’s lively, fresh, funny, politically correct, and, well, you get the idea. The cast of characters includes Isabel Duncan, a scientist who works in the field of primate linguistics and has dedicated her life to the bonobo great apes (found only in the Democratic Republic of the Congo, but because of their propensity for language and other, considerably earthier forms of interaction, are a favorite source of study around the world); John Thigpen, a journalist sent to interview Ms. Duncan, meet the bonobo apes she studies and write a piece about the laboratory performing the studies; Cat Douglas, John’s fellow journalist who is intent on scooping every tidbit John uncovers; Amanda Thigpen, John’s novelist wife who has just lost her agent and all hopes of publishing her second novel; Dr. Peter Benton, Isabel’s fiance and her immediate boss at the laboratory, and a man himself who bears scrutiny. The list goes on. There is a mother-in-law from hell, a laboratory-hating animal rights group, a reality show producer, script writers, make-over artists, tabloid journalists, disreputable animal labs, sweet ladies of the night, drug dealers and a pit bull named Booger.

The plot centers around the violent kidnapping of the bonobo apes and the ensuing search for their whereabouts. The identity and intent of the kidnappers involves enough treachery, deceit, and cruelty to both animals and humans to satisfy any ambitious writer, and Sara Gruen’s storytelling skills are more than up to the task.

Gruen’s characters are generally sympathetic and we care about them as much as we do the apes, who become identifiable by their names and behavior. The book deals seriously with the intense scientific study currently taking place in the field of human and primate communication. A subcategory is the field of bonobo-to-bonobo communication and, by the end of the novel, Gruen has revealed its often embarrassing and off putting parallels to the world of human-to-human interaction.

The novel opens with the meeting of journalist and researcher. Gruen wastes no time in bonding them both. A remarkable connection also takes place between the journalist and the bonobos: “He’d looked into their eyes and recognized without a shadow of a doubt that sentient, intelligent beings were looking back. . . . . and it changed his comprehension of the world in such a profound way he could not yet articulate it.” Shortly after John Thigpen returns to his publisher, his story is wickedly abducted by his fellow journalist, Cat, and news of the abduction of the bonobos hits the wires. The kidnapping is really the beginning of two stories, Isabel’s as well as John’s. Gruen reveals to the reader that in the often serpentine world of animal research, its funding and scientific underpinnings are not necessarily on the same track. Making use of satire and some very funny, slapstick scenes, she exposes pop culture with the same intensity.

The novel, for all its topical range, comes to a satisfying conclusion and the reader is left to wonder if Sara Gruen has exposed us to the world of the ingenious bonobo great apes or has turned the tables and exposed those humans watching from the other side of the glass. Whichever (or both), Gruen has written an entertaining and informative novel not to be missed.

Sunny Solomon holds an MA in English/Creative Writing, San Francisco State University. She is a book reviewer for “The Clayton Pioneer” and her poetry and other writing has been published in literary journals, one chapbook, In the Company of Hope and the collection, Six Poets Sixty-six Poems. She was the happy manager of Bonanza Books, Clayton, CA and Clayton Books, Clayton, CA. She continues to moderate a thriving book club that survived the closure of the store from which it began. Sunny currently lives next to the Truckee in Reno, NV.
More from this reviewer
PrevLondon Calling, Book 3 of the JP Kinkaid Chronicles
Baking Cakes in KigaliNext