Alexander Hamilton in Book and Song 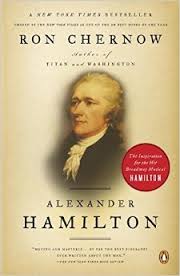 Hamilton, the biography and Hamilton, The Musical

My son-in-law encouraged me to read Chernow’s Alexander Hamilton. I bought it but didn’t read it until my daughter bought tickets for us to see Miranda’s Hamilton, The Musical on Broadway. Both the book and the musical are extraordinary experiences, but in different ways.

Alexander Hamilton made Aaron Burr famous, or infamous if you prefer, when Burr mortally wounded him in a duel in 1804—the most famous duel in American history. That much everyone can agree on. Chernow’s purpose in writing this scintillating biography of Hamilton is not to cast doubt on this consensus. Because there is little else in Hamilton’s life that a majority of those in the know agree upon, Chernow has much else to write about.  History has not been kind to Hamilton, a situation due in part to the enemies he made during his lifetime. Thomas Jefferson and James Madison, big names to be sure, considered him to be dangerous to the new republic for a myriad of reasons that they made public. Chernow dwells on the reasons why so many of Hamilton’s contemporaries hated him, but also provides testimony from his friends as to why he was a great man.

Perhaps the central conundrum that Chernow considers is why Hamilton fell into relative obscurity given his pivotal role in the Revolutionary War, in writing the Federalist papers that sold the new Constitution to the thirteen states, and in providing much of the financial and administrative framework as Secretary of the Treasury, framework that allowed the new United States to survive and thrive. From 1776 to 1796 there was hardly a person with the exception of George Washington who was more central to our nation’s evolution. In an era of large, ambitious personalities, Hamilton‘s was one of the most charismatic and alarmingly flawed.

Hamilton was his own worst enemy. He was always the smartest person in the room and never pretended otherwise. No one liked crossing verbal swords with him. His writing was even more pointed. He wrote voluminously, continuously, and brilliantly. In the Broadway musical and adaptation of Chernow’s biography the Aaron Burr character says to Hamilton:  “You should talk less and smile more.”  Hamilton seems never to have known when to stop talking, even though his extemporaneous speeches poured forth in clearly crafted sentences and paragraphs. To be sure, Hamilton took himself too seriously by half.  Burr’s enjoiner to smile more foreshadows Hamilton’s hubris that led eventually to his taking the boat and his pistols to Weehawken, New Jersey, to meet Burr.

I rarely compare a book with the movie made about it because they are two different creative expressions, each of which has a different intention. In this case, Chernow’s book inspired the Broadway musical Hamilton, which I was recently fortunate enough to see. It is a stunning stage production filled with extraordinarily talented actors and actresses, including Lin-Manuel Miranda who, in addition to playing Hamilton, wrote the music, the lyrics, and the theatrical book. (He has just been awarded a MacArthur Foundation Fellowship, “Genius Award”.)

Is the musical true to the book in all respects? No, of course not. Nor can it be. It does, however, showcase the super high voltage that charged this period in American history. Our Founding Fathers are often portrayed as stuffed shirts in short pants. Miranda peels away the official portraits to reveal the ambitions, the passions, the intellectual explosiveness, and personal animosities that propelled the thirteen colonies into rebellion and then into a new nation that “turned the world upside down.”

The narrative arc in Chernow’s book and Miranda’s musical is similar in that both keep Alexander Hamilton squarely in the narrative frame. Still, both provide sufficient context, although in different ways, to keep the action moving and dramatic. Chernow’s book is wonderful history. Miranda’s musical is wonderful historical fiction. Both are satisfying even though both assert that Hamilton, by contrast, could get no permanent satisfaction.   –  Neal Ferguson 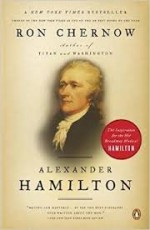 Neal Ferguson is a self described Anglo-phile. After studying for a PhD in British history and doing research for a year in various British archives, he came to the University of Nevada in 1970 to teach. Soon he found himself in administration where he remained until 2003. After returning to full-time teaching a decade ago, he decided to concentrate his teaching energies on Medieval British history and various global aspects of World War II. Dedicated to Ambrose Bierce’s proclamation that the purpose of war is to teach Americans geography, Neal insists that his students accompany him (in class) to sundry east European rivers and steppes, African deserts and jungles, south-east Asian mountain ranges and peninsulas, and small islands and coral reefs in the Pacific. Currently he is writing a book about the ups and downs of General Douglas MacArthur’s military reputation.
More from this reviewer
PrevThe Witch of Lime Street, the spirit world revisited
Into the Heart of the CountryNext