The Witch of Lime Street, the spirit world revisited 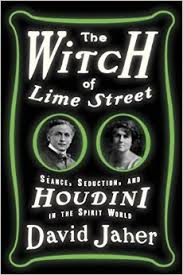 The Witch of Lime Street: Séance, Seduction, and Houdini in the Spirit World

The “Roaring Twenties” have a reputation, deserved or not, for being a decade of excess in everything except the consumption of legal booze. Set in the 1920s, David Jaher’s The Witch of Lime Street chronicles excess on nearly every page. It is an often lurid history of “spiritistic” and “discarnate” (two of his favorite words) magical mysteries that left this reader gasping, disoriented, and titillated (but feeling a bit slimy).

Staged magic shows were not invented in the 1920s, although the Great Houdini reached both his zenith and extinction then. Although it was not the first time that mediums called up the spirits of the dead to communicate with the living, it was the time that the Ouija Board became an extremely popular parlor game. Staged magic shows and spirit appearances both have been around for most of human existence, but during the decade of the twenties the two flowed together in some spectacularly entertaining ways.

Who knew that the U.S. Congress actually held a public hearing on a bill that would have made it illegal for mediums, fortune-tellers, and other charlatans to charge for their “services”? The halls of Congress for a time were filled with spooks, palm-readers, and mediums on one side and ghost busters, rationalists, and scientists on the other. Houdini played a prominent role in the proceedings. To be fair, such a gaggle might not be noticeable in today’s Congressional circuses.

Jaher first introduces Harry Houdini, a celebrity magician who attempted to expose any mystic medium not willing to admit to being a fake. Then Sir Arthur Conan Doyle is introduced. Doyle, the famous creator of Sherlock Holmes, is now a credulous believer in spirit mediums. Finally, Jaher brings various other mediums, skeptics, and gullible bystanders into the frame. The effect of this large cast of characters is that Jaher only slowly and somewhat confusingly leads his readers to the central drama of his book.

Scientific American magazine had quickly become a reputable periodical after its creation in 1845. So it was not entirely surprising that it took on the scientific investigation of spirit mediums after the end of the World War I. Although it was an American scientific magazine, it recognized the existence of a “spiritistic” tsunami in the wake of the vast carnage of World War I and the Spanish Flu pandemic of 1918-1920. There were more than thirty million dead souls world-wide as a result of those catastrophes, most of them young and desperately missed. The number of mediums available to commune with the dead seemed to rise proportionately. Scientific American offered a cash prize of $2500 to mediums who could pass muster. They would have to display their talents under controlled circumstances as defined by an august committee, one of whose members was the Great Houdini.

Since most mediums operated in the dark, they were allowed this one concession by the committee. So almost all of the testing was done in total darkness. Still, no one reached within a magic wand’s distance of credibility until Margery Crandon volunteered to suffer the ordeal by committee. Margery wasn’t a typical medium. She was married to a prominent and prosperous Boston surgeon. She never charged for her services. She was young, exuberant, witty, and seductive. Her charms were acknowledged by all who knew her. Even those most determined to expose her as a fake liked her and were often a bit smitten. And she channeled her loquacious dead brother, Walter, who was humorous, profane, and poetic.

Even though The Witch of Lime Street suffers from some repetitiveness and fat writing, it is a vastly entertaining book. Both of the lead characters in this story (Houdini and Crandon) – however flawed – managed to secure my undivided attention. After all, both were entertainers and that’s what good entertainers do—they demand our attention. Despite some story telling lapses, David Jaher successfully conveys their humanity, likability, and ability to command a stage whether well-lit or in darkness.   – Neal Ferguson

The Witch of Lime Street, Séance, Seduction, and Houdini in the Spirit World is David Jaher’s debut book. 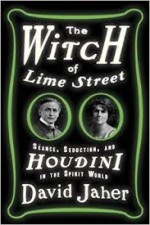 Neal Ferguson is a self described Anglo-phile. After studying for a PhD in British history and doing research for a year in various British archives, he came to the University of Nevada in 1970 to teach. Soon he found himself in administration where he remained until 2003. After returning to full-time teaching a decade ago, he decided to concentrate his teaching energies on Medieval British history and various global aspects of World War II. Dedicated to Ambrose Bierce’s proclamation that the purpose of war is to teach Americans geography, Neal insists that his students accompany him (in class) to sundry east European rivers and steppes, African deserts and jungles, south-east Asian mountain ranges and peninsulas, and small islands and coral reefs in the Pacific. Currently he is writing a book about the ups and downs of General Douglas MacArthur’s military reputation.
More from this reviewer
PrevOscar Wilde and a Death of No Importance
Alexander Hamilton in Book and SongNext