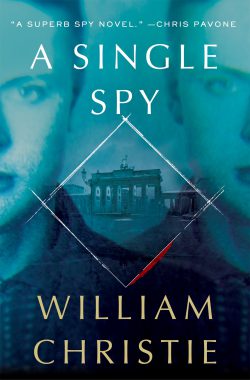 Writing A Single Spy, William Christie turns a historical footnote into a complicated novel of international intrigue.  That footnote, found in Professor John Erickson’s The Road to Germany, alludes to “Operation Long Jump,” a supposed plot to assassinate Stalin, Churchill, and Roosevelt while the three allied leaders were meeting in Teheran in 1943.  Apparently, due to the actions of an undercover Soviet spy embedded in the German intelligence command, the attempt failed.  Intrigued by this nugget of information, Christie did further research.  When he was unable to confirm the story’s veracity, Christie decided to put his imagination to work.  The result is a fictional reconstruction of what might happen when A Single Spy sets to work.

Recruited by the Soviets and trained by Russian spymasters, Alexsi Ivanovich Smirnov learns his trade well.  The first half of Christie’s novel follows Alexsi’s education and indoctrination.  Then Alexsi becomes Friedrich and finally becomes Walter, a young German returned to his family’s homeland and determined to find success in Hitler’s Berlin.  He joins the army and, because of his fluency in several languages, soon is being trained as a German spy.  The second half of A Single Spy follows Alexsi from Germany to Switzerland, on to Iran, back to Berlin, and then back again to Teheran.  With each move, Alexsi embeds himself more and more deeply into the Nazi machine.

A soul-less young man, Alexsi truly has allegiance only to himself.  A complex young protagonist, both his physical prowess and his ethical stances reminded me of Jack Reacher’s complicated mores. That is, Alexsi always manages to escape threatening situations, sometimes with his wits and often with street-fighting feints and tactical moves.  And even as the Soviets and the Germans are constantly maneuvering him, Alexsi is returning the favor by undercutting their ill-conceived treatment of innocent human beings.  I would describe him as soul-less, however, because he never allows anyone to access his heart.

A Single Spy is unlike most thrillers in that the main character holds his world at arm’s length.  Since Alexsi never admits to any attachments, it is difficult for a reader to feel an attachment to him.  I cheered for him, of course, but I read his maneuverings more as intellectual exercises than as heart-pounding occasions.  I found Christie’s history most informative, and I especially learned about European interference in Turkey and Iran, an aspect of World War II I had never before considered.  But A Single Spy never quite grabbed me emotionally.  Like Alexsi himself, this novel distances any emotional response.

That said, I nonetheless recommend A Single Spy.  Its historical accuracy alone is worth exploring.  Christie writes well, and he uses his imagination in plausible ways.  Even though Alexsi’s constant escapes from danger may defy belief, the historical contexts in which he finds himself are quite compelling.  I always enjoy historical novels that pinpoint a moment in time and that embroider a minor incident into a fully realized story.  William Christie, with A Single Spy, does so with great finesse.   –   Ann Ronald

Also available by William Christie: The Warriors of God; Seal Team Seven: Direct Action; Mercy Mission; The Blood We Shed; Threat Level; The Enemy Inside; Darkness Under Heaven; Bargain With the Devil. 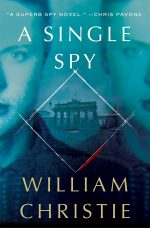 Ann Ronald is a retired English professor from the University of Nevada, Reno. Author of dozens of reviews, she’s also written a number of books about the American West. They include literary studies such as The New West of Edward Abby and Reader of the Purple Sage, cultural studies such as GhostWest and Oh, Give Me a Home, and nature writing such as Earthtones: A Nevada Album. Her latest is a work of fiction, Friendly Fallout 1953. Since retiring, she’s been reading vociferously, so “Bookin’ With Sunny” is giving her a wonderful opportunity to share thoughts about her favorite new discoveries.
More from this reviewer
PrevBetrayal at the Buffalo Ranch
How to Catch a MoleNext