Betrayal at the Buffalo Ranch 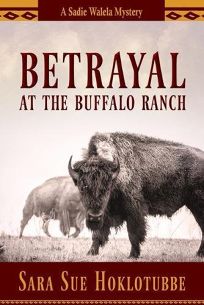 BETRAYAL AT THE BUFFALO RANCH

Sara Sue Hoklotubbe’s Betrayal at the Buffalo Ranch is the first Sadie Walela novel I have read, but it turns out to be the fourth in a series of mysteries. If you enjoy western intrigue where the bad guys are obvious villains, and the good guys happily prevail, you will love this story (and undoubtedly Hoklotubbe’s other three as well). I certainly give Betrayal at the Buffalo Ranch a thumbs up, and I definitely plan to read the prequels.

Following the trails of Sadie Walela and her deputy sheriff boyfriend, Lance, is an intriguing ride through Oklahoma’s Cherokee Nation and the territory that surrounds the tribal lands. Along the way, you learn many details about contemporary Cherokee life and the modern West, too.  The title, Betrayal at the Buffalo Ranch, betrays the gist of this particular mystery. A neighboring rancher wants to set up a high-priced hunting spread, where guests spend generous sums of money to hunt buffalo, trophy elk, and deer.  To ensure his ranch’s success, Angus Clyburn is buying up nearby properties (or otherwise acquiring them by fraudulent means) and has set his sights on Sadie’s land.

It seems that Angus also has acquired many enemies in northeastern Oklahoma. The novel opens with an anonymous gunman threatening his life, so I expected Angus’s corpse would soon appear. Wrong. Someone else dies; first, a drifter setting fence to separate Sadie’s property from her neighbor’s. Meanwhile, mysterious trucks filled with buffalo begin arriving from anonymous locales, some delivered to the new buffalo ranch and some to the Cherokee nation.  I mentioned the many trails Sadie follows: the murdered stranger, the speculative land acquisition, the buffalo themselves (and fears of brucellosis infection). The paths, of course, overlay each other as Sadie, Lance, and Sadie’s office staff (she runs a travel agency, with equally inquisitive employees) figure out all the complexities. Other deaths soon occur, with even more dangerous complications.

The plot of Betrayal at the Buffalo Ranch is fairly straightforward, and the ultimate solution and resolution were not unexpected. Still, I enjoyed reading about Sadie’s amateur detective forays, and I especially enjoyed the local color.  Hoklotubbe, herself a Cherokee tribal citizen, not only sets the rural stage in finely crafted prose but also portrays a most interesting set of characters with empathetic fears and foibles. The Cherokee elders, in particular, are deeply drawn.

Deception on All Accounts was Hoklotubbe’s first Sadie Walela mystery, followed by The American Café and Sinking Suspicions. I look forward to reading all three, just as I liked reading Betrayal at Buffalo Ranch and sharing its twists and turns.   –  Ann Ronald 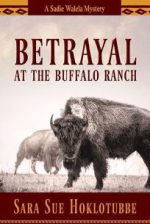 Ann Ronald is a retired English professor from the University of Nevada, Reno. Author of dozens of reviews, she’s also written a number of books about the American West. They include literary studies such as The New West of Edward Abby and Reader of the Purple Sage, cultural studies such as GhostWest and Oh, Give Me a Home, and nature writing such as Earthtones: A Nevada Album. Her latest is a work of fiction, Friendly Fallout 1953. Since retiring, she’s been reading vociferously, so “Bookin’ With Sunny” is giving her a wonderful opportunity to share thoughts about her favorite new discoveries.
More from this reviewer
PrevDon’t Skip Out on Me
A Single SpyNext