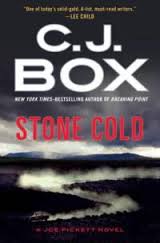 Stone Cold by C. J. Box and The Precipice by Paul Doiron

As I was reading and reviewing Paul Doiron’s first four Mike Bowditch mysteries for “Bookin’ with Sunny,” I was reminded of C. J. Box’s Joe Pickett novels. Both feature game wardens in their respective surroundings, Bowditch in Maine and Pickett in Wyoming. Both set their protagonists loose on the land, solving murders associated with the misuse of natural resources in one way or another. Both describe the scenery in tangible terms, bringing distant mountains, deep woods and high deserts to life. And both feature heroic public employees often willing to bend the rules. So it was with pleasure that I read, back-to-back, the most recent Bowditch and Pickett novels.

I expected the two to echo each other, but they did not. Instead, Doiron and Box explore two very different tactics that series authors might take to keep their readers interested (and buying books). Doiron, perhaps because he is writing just the fifth novel in his series, follows a more conventional path. The Precipice opens when two through-hikers on the Appalachian Trail go missing in Maine. Mike Bowditch is involved first in the search and rescue, then in the recovery of the two young girls’ bodies, and ultimately in the solution to the crime. The Precipice focuses on the terrain, the elevation gained and lost, the huts along the way, the lakes, the cliffs, the waterfalls, the beautiful earthiness of the trail.

C. J. Box’s Stone Cold brings the Wyoming landscape to life, too, but his novel uses Joe Pickett’s role as a game warden solely as a ploy. The plot itself might better be described as a thriller, with militaristic operations and international implications. In effect, Box is moving from one popular formula to another. Picket’s personality and modus operandi don’t change, but the story line moves in distinctly non-ecological ways. It might be set anywhere, except for the isolation of northeastern Wyoming, and the plot might be applied just as fittingly in a Vince Flynn or a Lee Childs novel. Since Stone Cold is Box’s fourteenth Joe Pickett novel, it makes sense for him to explore new directions. Not only does this creativity allow him to attract a wider range of viewers, but his loyal readers still can continue to appreciate Pickett’s family dynamics and his ongoing friendship with Nate Romanowski, Joe’s para-military friend.

I liked both of these novels, The Precipice and Stone Cold. Each is well-written, each travels a plausible trail, and each should be well-received by its readers. I must admit, however, that I personally preferred the more conventional approach to the more typical trials and tribulations of a game warden. Even though I know Wyoming topography better than I know Maine, I found myself savoring Mike Bowditch’s subtle methodology more than I appreciated Joe Pickett’s more violent tactics and actions. I liked the secondary characters in The Precipice better, too, perhaps because they seemed more like people I might meet while hiking rather than those I might confront with military hardware slung over my shoulder.

That’s not to say, however, that Stone Cold isn’t a good read. It’s quite a daring thriller, and I enjoyed every page. It’s just that I like my game wardens to be on-the-ground game wardens, whether in the fifth book or the fourteenth. At this point, I’d rather hike with Mike than with Joe.  – Ann Ronald 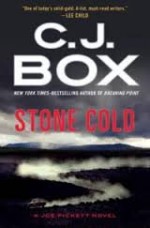 Ann Ronald is a retired English professor from the University of Nevada, Reno. Author of dozens of reviews, she’s also written a number of books about the American West. They include literary studies such as The New West of Edward Abby and Reader of the Purple Sage, cultural studies such as GhostWest and Oh, Give Me a Home, and nature writing such as Earthtones: A Nevada Album. Her latest is a work of fiction, Friendly Fallout 1953. Since retiring, she’s been reading vociferously, so “Bookin’ With Sunny” is giving her a wonderful opportunity to share thoughts about her favorite new discoveries.
More from this reviewer
PrevLafayette in the SOMEWHAT United States
Apex Hides the HurtNext