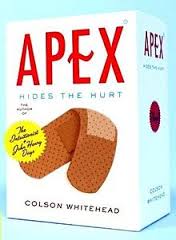 Ignorance is not bliss after all. You won’t see Band-Aids the same way after reading Apex Hides the Hurt.

Apex tells the story of the Consultant who is hired to create a new name for the town of Winthrop. He encounters Regina Goode, the mayor, and Lucky Aberdeen, the entrepreneur, both of whom have hired him under suspicious circumstances. The Consultant also meets a descendant of the town’s founders, Albie Winthrop, and questions everyone’s motives — including his own.

As a woman of color, I took notice of the fact that the Consultant is black. Usually this doesn’t make as much difference in the narrative style as it does in the plot, but Apex diverges from tradition. Instead of the non-white characters being singled out for description, the Consultant identifies white characters. Colson Whitehead tells this story from the viewpoint of those who often fall into the “Other” category. Like most humans, we usually notice those who are different from us.

The backstory follows the Consultant as he creates a name for a popular bandage, “Apex,” the basis of the title, which matches the skin tone of anyone wearing it. It is both the Consultant’s crowning achievement as a “Nomenclature Expert,” and his downfall. Apex Hides the Hurt, the product’s tagline, becomes metaphor for the glossy and perfect marketing used to cover the hurts of American society:

“In the advertising, multicultural children skinned knees, revealing the blood beneath, the commonality of wound, they were all brothers now, and multicultural bandages were affixed to red boo-boos. United in polychromatic harmony, in injury, with our individual differences respected, eventually all healed beneath Apex. Apex Hides the Hurt.”

I was reminded of “colorblind” ideology, in which we ignore our outward and cultural differences, focusing only on that which makes us all the same. (The saying, “all men bleed red,” applies here.) In ignorance of what makes us different, we (Americans) could then pretend all our shortcomings were imaginary, a thing of the past to be forgotten. The racism and the hatred and the hurt could be wiped away in an instant if we pretended that our common humanity makes us all the same.

Apex challenges the meaning of names, their history, and their effect on the people who create them as well as those who accept them. Can we, as Americans, as humans, reach an apex at which we forget our violent history? Does Apex truly hide the Hurt, indeed?

The Consultant is never named, though he names everything else in the novel. His name for the town, and its reasoning, is one that left me in deep contemplation for a time. I studied human development and language, so I am doubly impressed by attention to detail when it comes the creation of names by the Consultant. If you’re looking for an escape from the politics of today, if you need a fresh perspective on the world, mixed with some mystery and bit of dry humor, I definitely recommend Apex Hides the Hurt.   –  Brandy Burgess 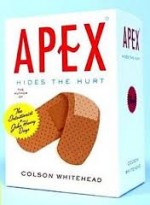 Brandy Burgess holds a BS in Speech Pathology from the University of Nevada, Reno. She was born in Arkansas and grew up living there and parts of the east coast before moving to Las Vegas, Nevada in 1997. She works as a freelance writer, and moonlights as the creative muse behind BrandyDanielle.com. She is currently writing for ComicBookDebate. Brandy resides in downtown Reno, Nevada.
More from this reviewer
PrevMystery Bound Game Wardens
Science and Art Joining ForcesNext