Lafayette in the SOMEWHAT United States 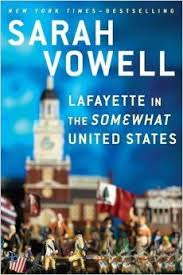 Lafayette in the SOMEWHAT United States

I’d venture a guess that few adults remember their 11th grade American history class as being particularly humorous. After all, escaping European religious persecution, taming a succession of wild frontiers, giving George III the heave-ho, building a new nation on a hill, acknowledging the greatness of the Founding Fathers and Abigail Adams, and . . . are all VERY SERIOUS events. That’s how I remember their presentation in class—intriguing to me as a future historian—but heavy, portentous nonetheless.

Imagine my surprise when I read in Sarah Vowell’s Lafayette in the SOMEWHAT United States that “the Founding Fathers, while sticklers about taxation without representation in general, were magnanimously open-minded about the French crown overtaxing French subjects to pay for the French navy” to help the American Revolution. Or “anyone who accepts the patriots’ premise that all men are created equal must come to terms with the fact that the most obvious threat to equality in eighteenth-century North America was not taxation without representation but slavery.”

Admittedly, humor is sometimes personal and what makes me giggle may make others gag. Still, I found Vowell’s humor to be witty, insightful and rarely forced. Spoiler alert: if you know yourself to be intolerant of those who insist on detecting irony in America’s checkered past, however mild, this book may give you something to think about or it may simply piss you off. It won’t, however, leave you stuck in neutral.

The Marquis de Lafayette, French, nineteen years old, a Major General in the newly formed U.S. Army in 1777, and richest orphan in both France and the U.S.—his life and relationship to the American Project are the focus of Lafayette.When the American Revolutionary War was finally over following the protracted peace negotiations that lasted from 1781 to 1783, Lafayette was back in France trying to the lead the humdrum life of a French aristocrat with wife, family, and scads of money. As we know that idyll did not long survive Marie Antoinette’s ill-chose words about eating cake. Within a decade, Lafayette found himself a prisoner of the Austrians and his wife threatened by Madame de Guillotine.

One thing led to another, and then that led to Napoleon and Waterloo. Before Lafayette was aware, forty-eight years had passed, and he had not returned to America to assess the success of the American Project. In 1824 he did return to great acclaim, many celebrations, and much music written in his honor, hence the occasion for this book, Lafayette in the SOMEWHAT United States. It is in part the story of a famous man’s famous welcome back. The other part examines his real contributions to America from 1777 to 1781.

Despite Vowell’s saucy tone and determination to deflate some of our cherished pretensions, her thoughtful history is elegantly presented. It serves as yet another reminder of how much we owe France for our independence. (Is our historical forgetfulness on this topic a consequence of a short attention span or premature dementia?) It is no exaggerated assertion: No France, No Independence. How quaint a claim. An absolute monarchy built around an anachronistic aristocracy was crucially helpful in establishing the world’s most successful democracy. (It is admittedly true that real democracy would require a Civil War, the 19th Amendment, and the Civil Rights Act of 1965—another nine score and eight years or so.) Despite France’s contributions to our freedom and its gift of the Statue of Liberty, we Americans have not always been kindly disposed towards the well-tempered Gauls. Remember Freedom Fries? As I write this review, however, I hear comments during France’s current critical times that “we are all Parisians now.” Vive la france! – Neal Ferguson 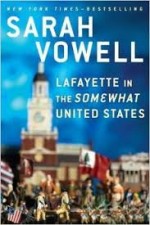 Neal Ferguson is a self described Anglo-phile. After studying for a PhD in British history and doing research for a year in various British archives, he came to the University of Nevada in 1970 to teach. Soon he found himself in administration where he remained until 2003. After returning to full-time teaching a decade ago, he decided to concentrate his teaching energies on Medieval British history and various global aspects of World War II. Dedicated to Ambrose Bierce’s proclamation that the purpose of war is to teach Americans geography, Neal insists that his students accompany him (in class) to sundry east European rivers and steppes, African deserts and jungles, south-east Asian mountain ranges and peninsulas, and small islands and coral reefs in the Pacific. Currently he is writing a book about the ups and downs of General Douglas MacArthur’s military reputation.
More from this reviewer
PrevA Cafecito Story
Mystery Bound Game WardensNext