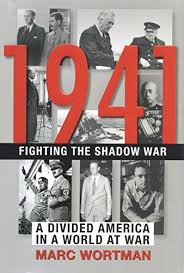 1941: FIGHTING THE SHADOW WAR, A DIVIDED AMERICA IN A WORLD AT WAR

Do I think this book is worth reading? Yes. Does this book irritate me? Yes. Before I tell you why I recommend this book, I must express some of my irascibility. Wortman, in Fighting the Shadow War, has much to say about American foreign and domestic policy before and during 1941 and, by and large, he says it with verve and sometimes ingenuity. Nevertheless, he begins his book with an exaggeration that I find irritating when he writes in the introduction, this “story has not been told. Not in this way.” Begging the author’s pardon: the main outlines of this story are well-known.

Next: call me a fuddy-duddy historian, but I rely on writers of historical subjects to provide a clear chronological flow. Wortman sometimes loses or confuses me by lack of clarity in this regard. For example, Wortman’s introduction to William Shirer, famous for his radio lead-in: “Hello, America. This is Berlin,” is loosely wrapped. Shirer arrived in Germany in 1934 shortly after Hitler became Chancellor. Shirer left Berlin in December 1940 with his secret dairies safely stowed. Wortman bounces back and forth between early years and later years often with no warnings or transitions to guide the unwary reader. Very disconcerting even though I’m familiar with these events. To be fair, in subsequent chapters, his chronological grip is much clearer. One more minor irritant: nearly half this book covers events before 1941. Certainly, the various anti-war movements were in full flood before that famous year. (See Lynne Olsen, Those Angry Days. . . . 1939-41.) So, why is 1941 the only date in the title?

Wortman’s framing device in Fighting the Shadow War is useful, effective and novel although, to repeat myself, the story thus bookended is well-known. He uses two American journalists, William Shirer and Philip Johnson, to get his story moving. Both came to know Nazi Germany well, and both wrote and spoke from deeply committed positions. There, the similarities between the two ended. They knew and hated each other. One was highly critical of the Nazis. The other was, until 1941, a committed American fascist. They represented the two sides of the sentiment and debate in America about American foreign policy during the period 1934-41. Simply put, should America remain resolutely neutral and uninvolved in the growing Nazi threat, or should America take the side of the liberal democracies out of regard both for moral reasons and those of national interest? The controversy was loud and bitter.

Wortman recognizes that President Franklin Delano Roosevelt was at the center of this domestic maelstrom. FDR was and is controversial, and he was a master of indirection and shading the truth of things. He was both a superb politician and statesman. Even though a patrician, he, like his famous uncle, had the common touch. Some historians and even more conspiracy theorists have concluded that FDR manipulated the American people into supporting another European war. Wortman doesn’t go there. In contrast he suggests that FDR’s supporters continually urged him to lead not follow American public opinion. It appears to me that sometimes FDR led and sometimes followed; he practiced an exquisite calculus. In the end, we know what pushed the needle of American public opinion towards war. Ironically, it was the Pacific not Europe. Wortman carefully allows events in the Pacific to move to center stage.

For the general reader, Wortman’s book is a compelling read. His anecdotes are first-rate; his sense of drama is keen. Also, it’s well to be reminded that history doesn’t proceed entirely by blind forces. Human personality makes a difference. In Wortman’s Fighting the Shadow War, the personalities stand out impressively and persuasively. – Neal Ferguson

Also available by Marc Wortman: The Millionaires’ Unit: The Aristocratic Flyboys Who Fought the Great War and Invented American Air Power; The Bonfire: The Siege and Burning of Atlanta. 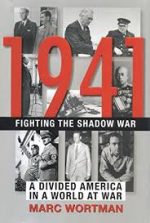 Neal Ferguson is a self described Anglo-phile. After studying for a PhD in British history and doing research for a year in various British archives, he came to the University of Nevada in 1970 to teach. Soon he found himself in administration where he remained until 2003. After returning to full-time teaching a decade ago, he decided to concentrate his teaching energies on Medieval British history and various global aspects of World War II. Dedicated to Ambrose Bierce’s proclamation that the purpose of war is to teach Americans geography, Neal insists that his students accompany him (in class) to sundry east European rivers and steppes, African deserts and jungles, south-east Asian mountain ranges and peninsulas, and small islands and coral reefs in the Pacific. Currently he is writing a book about the ups and downs of General Douglas MacArthur’s military reputation.
More from this reviewer
PrevThe Versions of Us
Wolfer and Wolf LandNext