Published in 1931, Wyatt Earp Frontier Marshal, an informal biography, benefits from actual interviews granted the author by the legendary lawman. Wyatt Earp spent his last years in Los Angeles and died there in 1929. He was nearly 81, a ripe old age for one who engaged in so many gunfights. As you might expect, these armed encounters with cattle rustlers, stagecoach robbers, and other outlaws make up the bulk of the book.

Page after page of Wyatt Earp Frontier Marshal, describes in exact detail who fired at whom, where the shooters stood, who was hit and who survived. It’s like watching a movie. More on that later. What’s interesting is how many times the marshal of Dodge City, Kansas, and later Tombstone, Arizona, stood up to his adversaries and persuaded them to back down without a shot being fired.

The original dust jacket painting depicts the gunfight at the O.K. Corral. Inside is a photograph of the O.K. Corral itself. Another photo shows Wyatt Earp, a rather grumpy looking gentleman wellinto his seventies.

The real problem with Wyatt Earp Frontier Marshal is that recent research casts considerable doubt on its accuracy. One notable omission is a woman named Josephine Sarah Marcus (1860-1944). Barely mentioned in the text, she was Marshal Earp’s common law wife. They lived as a couple for decades. Even more troubling is that “Josie” exercised strict control over the public image of Wyatt Earp after his death. Josie was a saloon girl and consort of one Johnny Behan, sheriff of Tombstone and Wyatt Earp’s bitter enemy. Behan lent legal cover to much of the criminal element Earp was fighting. He went so far as to issue a warrant for Earp’s arrest on behalf of outlaw Ike Clanton following the O.K. Corral incident. Eventually, Josie switched allegiances from Behan to Earp. The book also fails to mention that Behan never paid for his crimes. He ended his career as warden of the Arizona Territorial Prison at Yuma and died in 1912.

In the wake of the book’s success, biographer Stuart N. Lake (1887-1964) expanded on the Wyatt Earp legend by contributing to a number of movies based on his life. In 1939 Randolph Scott played Wyatt in Frontier Marshal directed by Allan Dwan. Common law widow Josie had script approval, and the results were largely fiction. Much more notable was John Ford’s My Darling Clementine. Perfectly cast Henry Fonda played the marshal in this recounting of the O.K. Corral gunfight. This time emphasis was placed on the friendship between Wyatt Earp and Doc Holliday, played by Victor Mature. Lake’s story was the basis for the rousing western Winchester 73, starring Jimmy Stewart. Wyatt appeared only briefly and was played by Will Geer. Lake also consulted on the popular 1950‘s TV series starring Hugh O’Brian. 1994 saw the film Wyatt Earp starring Kevin Costner. For the first time in a major production, Josephine and Johnny Behan appeared as characters, but the events depicted fell somewhat short of history.

In 1957, the book, I Married Wyatt Earp, by Glenn Boyer, appeared and was based on a manuscript by Josephine Earp. Its contents were immediately questioned. Eventually it was discredited to the extent that I Married Wyatt Earp was withdrawn by its publisher, University of Arizona Press.  While it’s easy to think of Josephine as a prostitute who married well, it should be understood that the wild west exerted a Victorian morality regarding women. Prostitutes may have been ostracized from polite society. Yet some of these saloon gals enjoyed considerable independence and upward mobility. For more on the elusive Josie, I encourage you to examine Maria Doria Russell’s novels Doc and Epitaph. Both books have been reviewed at Bookin’ with Sunny.

So what are we to make of Mr. Lake’s book? Is it a selective and incomplete biography? Yes. Did Stuart Lake come under the spell of Josie the seductress? Probably. In any case, it’s become a rare book and hard to find in its original state. My conclusion is take it for what it is and enjoy the Hollywood style gunfights and rip-roaring shoot-em-ups. Isn’t that what you would expect from a book called Wyatt Earp Frontier Marshal? Biography meets fantasy and becomes legend. – Dan Erwine 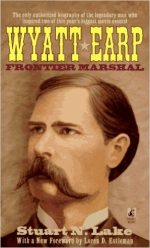 Dan Erwine holds a BS in Telecommunications, San Diego State University. Dan recently retired after four decades in radio broadcasting. His background San Diego stations KFSD and NPR's KPBS, and KUNR, Reno, NV. Over the years, Dan has produced and hosted a number of talk shows and interviewed over five thousand writers in almost every genre and career, from such notables as David Brin to Seamus Heaney, Allen Ginsberg, Judy Collins, Charlton Heston and Wally Schirra. Dan is a comic book aficionado and has a special interest in film, science fiction and mystery. He lives with his wife in Reno, NV.
More from this reviewer
PrevAmericanah – A novel approach to the Black experience in America
Old Glory, A Voyage Down the MississippiNext