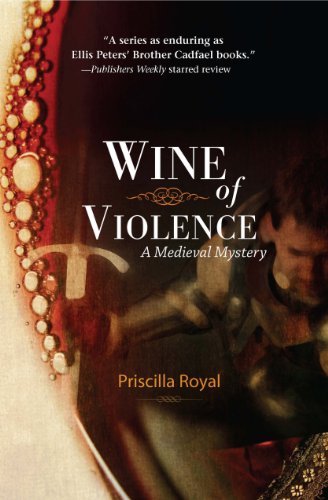 As regular “Bookin’ with Sunny” readers already know, this reviewer loves to find new mystery series, particularly smart ones. So, I am delighted to report an unusual discovery, a set of medieval mysteries featuring a learned, articulate, and intuitive prioress as its master detective. The series, created by Priscilla Royal, begins with Wine of Violence, which introduces us to a continuing cast of characters who will reappear through fourteen more novels, and counting.

Royal sets the stage in a most informative Foreword. Wine of Violence takes place in what Royal calls Tyndal, an imaginary priory that is part of a very real order with a unique history. The Order of Fontevraud was one of the very few double house orders. In such an order, a woman was in charge of two disparate domains—priests and nuns living in separate quarters but all reporting to a female leader, a prioress rather than a priest.

When the elderly prioress of Tyndal dies of old age, everyone expects faithful Sister Ruth to be promoted. Ostensibly a double house, the Tyndal nuns have been deferring to the Tyndal priests for years, and everyone at Tyndal expects the pattern to continue. The King of England, however, begs to differ. As a favor and also as a tactic to find out why the priory accounts are suddenly off-kilter, he appoints the young daughter of a loyal and respected noble to whom the king owes a favor. Twenty-year-old Eleanor of Wynethorpe is sent to Tyndal to take charge. Forthright, inquisitive, and as well-educated as any priest, she isn’t obsequious at all.

Part of the fun of Wine of Violence is watching Eleanor manipulate the nuns and priests who are displeased by her presence. Her shrewd moves are always done with subtlety, as she assesses alliances and determines who might be trustworthy. Almost immediately, she trusts Brother Rupert, a kindly old priest who also had befriended the previous prioress. Shortly after Eleanor’s arrival at Tyndal, however, someone brutally murders Brother Rupert, stabbing him, castrating him, then dumping his maimed body in the chapel garden. Now young Prioress Eleanor must not only take charge of her reluctant charges, but she must also solve a heinous crime.

While that crime is at the heart of Wine of Violence, along with Eleanor’s necessary machinations to wrest control of Tyndal from some misogynistic priests, Royal also includes key cultural observations. The Fontevrauds were known for their medical talents, and Tyndal boasts a highly respected infirmary/hospital that nearby townspeople access regularly. One of the sisters was trained by her physician father, and Sister Anne is particularly wise in the ways of herbal poultices and medicines. Whenever the reader learns about wild and cultivated herbs, there are hints that future Royal mysteries will include more about eastern and Islamic medical practices, which were further advanced than English medicine at the time.

Royal alludes to historical conflicts, too, not only the crusades along with the less-than-holy wars the king has been fighting to protect his land but battles from the recent past. Priests and nuns tended to be Normans, while the nearby townspeople are all Saxons. Old bitterness and resentments prevail, particularly when a Saxon crowner (what we might call a cross between a local policeman and a coroner today) arrives to investigate Brother Rupert’s murder. The feelings grow even more intense when a fellow Saxon is murdered, and significant clues point back to the Tyndal monastery.

If Wine of Violence is any measure of the fourteen Royal medieval mysteries to follow, this series promises to be excellent. I admit to scanning the Amazon book blurbs and found myself wanting to read them all.  Prioress Eleanor is a delight, a perceptive woman who cajoles friends and foes alike, a semi-sheltered medieval woman with a forthright, modern personality. I liked her, and I want to know more about her illustrious career. “Bookin’” readers, I’m sure, will agree.  – Ann Ronald

Also available by Priscilla Royal: Elegy to Murder; The Twice Hanged Man; Wild Justice; The Proud Sinner; Land of Shadows; Satan’s Lullaby; Covenant with Hell; The Sanctity of Hate: Killing Season; Valley of Dry Bones; Chambers of Death; Forsaken Soul; Justice for the Damned; Sorrow without End; Tyrant of the Mind; Favas Can Be Fatal. 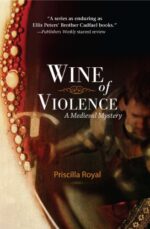 Ann Ronald is a retired English professor from the University of Nevada, Reno. Author of dozens of reviews, she’s also written a number of books about the American West. They include literary studies such as The New West of Edward Abby and Reader of the Purple Sage, cultural studies such as GhostWest and Oh, Give Me a Home, and nature writing such as Earthtones: A Nevada Album. Her latest is a work of fiction, Friendly Fallout 1953. Since retiring, she’s been reading vociferously, so “Bookin’ With Sunny” is giving her a wonderful opportunity to share thoughts about her favorite new discoveries.
More from this reviewer
PrevKnown and Strange Things
Caste, The Origins of Our DiscontentsNext