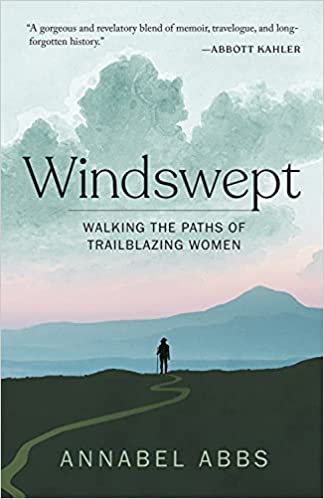 To read Windswept, Walking the Paths of Trail Blazing Women, is to join Annabel Abbs on an intellectual, physical, and emotional journey through Great Britain, Europe, and a piece of the American West. As her subtitle states, Abbs is “Walking the Paths of Trailblazing Women.” She has selected an eclectic group of women writers to follow, women of the nineteenth and early twentieth centuries who found personal expression and literary inspiration in long walks through isolated terrain. And they themselves were isolated, often trekking alone with only their imaginations for their solitary company.

Several peculiarities struck me as I read Windswept, oddities that added to my enjoyment of this travelogue/memoir/literary tour. First of all, her choices truly are eclectic. Voices I might expect to find were missing. Almost no Dorothy Wordsworth or Emily Bronte, for example, but long chapters about Gwen John, Clara Vyvyan, and Nan Shepard. I quite enjoyed tracing the footsteps of women whose names I barely recognized, but I wondered to myself why Abbs found their particular words and travels so compelling. The answer, I think, is that they spoke internally to her in ways that contemporary women, especially Americans, might not.

Abbs, raised in Wales and now living in London, reads the words of her choices carefully, then follows their routes both on the ground and in her head and heart. Her women, who include Frieda von Richthofen, Daphne du Maurier, Simone de Beauvoir, and Georgia O’Keeffe, as well as the three mentioned in the preceding paragraph, have several things in common. They are at emotionally wrought times in their lives. They rarely walk with men. Often they are avoiding difficult relationships with family, spouses, and/or friends. They choose to flee into walking spaces, where their difficulties recede. Abbs follows a similar pattern. Whether she is growing into adulthood, escaping the confines of motherhood (she loves her children dearly, but struggles with the stickiness of runny noses), or searching for her own literary self, Abbs uses windswept walking to find a redemptive path.

She has selected writers, too, who often speculate on the plight of the solitary female walker, as does Abbs. These women, to a person, ponder their fears. Those anxieties take many forms—uneasiness when hiking alone, uncertainty in the company of strange men, unsteadiness when the terrain roughens, downright terror crossing steep ice fields or wading icy streams. Abbs pinpoints the differences between male walkers, who rarely articulate any such uneasiness, and females, who are bound by narrow strictures and expectations. Can women, for example, bed down wherever? Some of Abbs’ writers even found difficulty renting rooms along the way, with innkeepers misunderstanding their motivations.

Windswept thus offers a new perspective on an ancient dilemma. How might women achieve freedom when society constrains their options? Through walking, Abbs would argue, and through reading the sorts of women she has unearthed in her literary and trailside travels. Windswept contains a lot to think about, for sure. A reader can easily turn its pages with the internet at hand, looking up the writers’ words, the places visited, the artwork envisioned. Several of Abbs’ women are artists, so it’s intriguing to see how they illustrated their travels. Abbs also sketches. None of her drawings appear in Windswept, but they do provide a background as she meanders.

And yes, Abbs does meander. That is one of the joys of Windswept, ambling up and down crooked pathways while glossing the words of some very talented and creative women. Abbs’s own words do justice to her companions, too, so the totality of Windswept is a creative package that will make a reader consider new rambling goals and dream of remembered distances. Simultaneously, Windswept encourages women to walk, anywhere, everywhere, physically and imaginatively, in company and alone.  – Ann Ronald 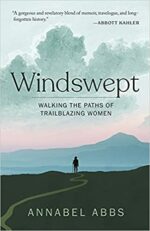 Ann Ronald is a retired English professor from the University of Nevada, Reno. Author of dozens of reviews, she’s also written a number of books about the American West. They include literary studies such as The New West of Edward Abby and Reader of the Purple Sage, cultural studies such as GhostWest and Oh, Give Me a Home, and nature writing such as Earthtones: A Nevada Album. Her latest is a work of fiction, Friendly Fallout 1953. Since retiring, she’s been reading vociferously, so “Bookin’ With Sunny” is giving her a wonderful opportunity to share thoughts about her favorite new discoveries.
More from this reviewer
PrevRodham
El DeafoNext