Home » Reviews » When We Were All Still Alive 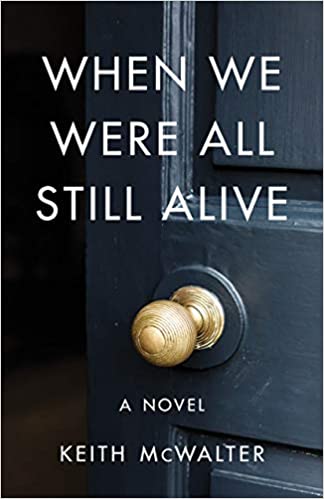 When We Were All Still Alive – A thoughtful and moving take on the ways the death of friends and spouses grows more intense as we age.

When We Were All Still Alive, by Keith McWalter, is a deeply thoughtful novel, one that will keep you awake at night reimagining its events and rethinking its observations. As the title suggests, its content centers on the profundity of death, on the countless ways the demise of friends and spouses grows more intense as we age. I’m not sure it’s a novel to be read by the elderly. It’s troubling. But it’s so well-written and asks such intriguing questions about the meanings of life and death that I want to recommend it anyway.

The novel opens with the accidental death of Sarah Burrell, on an icy winter highway, her car sideswiped by another. Her husband, who will be the focus of McWalter’s novel, is attempting to process the suddenness of the moment and of the news. Just as suddenly, then, When We Were All Still Alive reverts to “Before.” “Before” recounts the major events of Conrad Burrell’s life as a struggling young lawyer, as a successful attorney, as the husband of Megan and father of Madeleine, as an absentee divorced parent, as the husband of Sarah, and as a partner in a happy second marriage.

Hanging over that happiness, however, are Conrad’s fears about the future. Their acquaintances and friends aren’t getting any younger. Some are dangerously ill; others die quite suddenly. Conrad’s interior riffs about death are superbly on target. I remember my parents voicing such thoughts as they aged, and I recall my own occasional late-night imaginings. I thought this was the most important facet of When We Were All Still Alive, the autumnal drum beat of Conrad’s increasing anxieties about what the no-longer-limitless future might hold.

Less successful, I thought, was the final section of the book, “After.” These chapters trace the hours and days immediately following Sarah’s death, and then the subsequent years. Those years moved too quickly for me and seemed less insightful than what had gone before. Perhaps that was McWalter’s intent, however, to convey the tension and the build-up when “we were all still alive” rather than to explore the aftermath of tragedy. He examines the imagined fears more closely than the emptiness of later. And believe me, that examination is well-worth pondering and sharing. I found myself more intrigued by When We Were All Still Alive than by most other novels I’ve recently read. I suspect many “Bookin’ with Sunny” readers will agree.

The author blurb at the end of this novel notes that Keith McWalter also writes a blog, Mortal Coil. https://keithmcwalter.com I smiled at the Shakespearean title and decided I should see if it underscored and reiterated Burrell/McWalter’s When We Were All Still Alive concerns. It does, in a way, although it ranges further afield as well. It’s thoughtful, too, and I enjoyed many of its posts as much as I appreciated this novel. So, I recommend Mortal Coil along with When We Were All Still Alive, and I look forward to reading more of Keith McWalter’s musings. – Ann Ronald

Also available by Keith McWalter: The Time Traveler’s Lament; Taking Sides; Men Are Pigs; No One Else Will Tell You; Befriending Ending; The Plastic Bag Will Not Inflate. 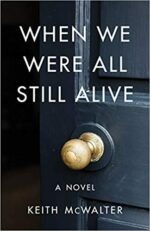 Ann Ronald is a retired English professor from the University of Nevada, Reno. Author of dozens of reviews, she’s also written a number of books about the American West. They include literary studies such as The New West of Edward Abby and Reader of the Purple Sage, cultural studies such as GhostWest and Oh, Give Me a Home, and nature writing such as Earthtones: A Nevada Album. Her latest is a work of fiction, Friendly Fallout 1953. Since retiring, she’s been reading vociferously, so “Bookin’ With Sunny” is giving her a wonderful opportunity to share thoughts about her favorite new discoveries.
More from this reviewer
PrevClock Dance
The Flight Girls – Radar GirlsNext