Home » Reviews » What She Left Behind

What She Left Behind 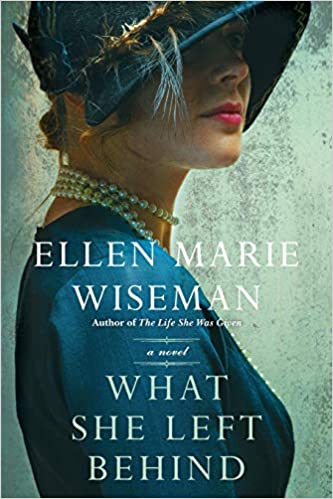 WHAT SHE LEFT BEHIND

Ellen Marie Wiseman cites the Willard Suitcase Exhibit and a nonfiction book by Darby Penney and Peter Stastny, The Lives They Left Behind: Suitcases from a State Hospital Attic, as dual inspirations for her novel, What She Left Behind. Examining the luggage left behind by asylum patients who never left the institution, Penney and Stastny attempted to reconstruct where those patients originated and why they came to be left at Willard State Asylum for the rest of their lives. Wiseman reimagines that process in a fictional way, creating two memorable female characters two generations apart.

Izzy is a teenager damaged by a horrific past. When she was seven years old, she watched her mother shoot and kill her father. Since that trauma, Izzy has been shuffled from one foster family to another. Her mother, first committed to a psychiatric facility and now incarcerated in prison for murder, hasn’t seen her daughter for ten long years. Izzy refuses to visit, fears her mother’s apparent insanity, and has cut herself off from any close human contact. As What She Left Behind opens, Izzy has been sent to a new foster family. But this one is different. Harry, art director of the state museum, and Peg, the museum curator, seem genuinely glad to welcome her into their home.

The fictional Harry and Peg are eager for Izzy to join their new project, investigating the old abandoned Willard asylum and cataloging the contents of suitcases left there by long since deceased patients. The plan is to put together a museum exhibit that will inform the public about the institution while displaying its most intriguing artifacts. Izzy, for obvious reasons, is uneasy and uncomfortable with the task. As she begins investigating the suitcases, however, she gets more and more intrigued. One particularly provocative steamer trunk, garnished with travel stickers from Europe and full of fancy clothing, contains photos and a diary recounting Clara Elizabeth Cartwright’s leisurely life prior to her arrival at Willard. Izzy definitely wants to know more about the mysterious young woman.

Alternating with Izzy’s exploratory chapters are chapters featuring Clara, daughter of a wealthy New York banker overly protective of his children. This is the age of the flappers, however, and Clara is determined to escape his heavy-handedness, to explore New York City’s speakeasies, and to go dancing at the Cotton Club with her friends. There, she meets and falls in love with Bruno, an Italian immigrant whom her parents deem unsuitable for their sheltered daughter. They want her to marry James, the womanizing son of her father’s business partner. When she refuses, in no uncertain terms, her father commits her to the Long Island Home for Nervous Invalids because she is having “episodes.”

Of course, there is nothing wrong with Clara’s mind at all, other than the fact that she loves Bruno and is furious with her family for hiding her away from him. Then her situation takes a turn for the worse. With the 1929 stock market crash, her father can no longer afford to keep her at the expensive Long Island home. Abandoned, Clara is sent to Willard and forced to live under unspeakable sanitary and psychological conditions. Wiseman combines Clara’s story, plus Izzy’s affinity for Clara’s plight, into a memorable novel about “insanity” and parental love and the persistence of the human spirit.

Some readers may be uncomfortable with the asylum scenes and the treatment that patients received there. What She Left Behind is not for the faint-hearted, but I found it a smart, sensitive novel featuring smart, sensitive characters. Moreover, its thematic constants are important ones. Wiseman does an excellent job of introducing serious societal questions in thoughtful ways. She also handles the reflections well, mirroring Clara’s life in Izzy’s, and vice versa. So, with the caveat that it is not a comfortable read, I recommend What She Left Behind to anyone who has ever been curious about how society treats women who don’t quite fit in with group expectations.  –  Ann Ronald

Also available by Ellen Marie Wiseman: Coal River; The Life She Was Given; The Plum Tree; The Orphan Collector. 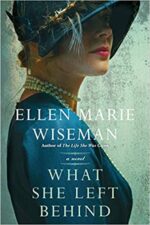 Ann Ronald is a retired English professor from the University of Nevada, Reno. Author of dozens of reviews, she’s also written a number of books about the American West. They include literary studies such as The New West of Edward Abby and Reader of the Purple Sage, cultural studies such as GhostWest and Oh, Give Me a Home, and nature writing such as Earthtones: A Nevada Album. Her latest is a work of fiction, Friendly Fallout 1953. Since retiring, she’s been reading vociferously, so “Bookin’ With Sunny” is giving her a wonderful opportunity to share thoughts about her favorite new discoveries.
More from this reviewer
PrevAmerican Zion
Will You Be My FriendNext