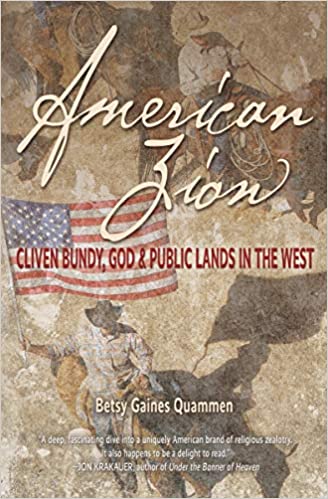 American Zion: Cliven Bundy, God & Public Lands in the West unearths historic myths and displays contemporary reasoning that together define current land use issues in the American West. Despite her own proclivities as an ardent environmentalist, Betsy Gaines Quammen offers a balanced inquiry into a complex array of disagreements. She does so with thoughtfulness, thoroughness, and respect. I’m not sure I’ve ever read a better environmental history than this one.

She begins with two important western strains. One is the Mormon Church—as it came to be, as Mormonism moved west, as patriarchal offshoots stretched its theology. The other is the cowboy ethos—the mythic he-man on his horse, unfettered, riding an unfenced range. She pairs the two ideological concepts, adds an enduring distrust of the federal government, then salts her brew with current notions of end times and white supremacy. The feral combination, Quammen shows, leads directly to the Bundy Bunkerville standoff in southern Nevada and their subsequent occupation of the Malheur Wildlife Refuge in eastern Oregon.

In the course of her narrative, Quammen uses the Bundy family to epitomize a whole cadre of western ranchers and renegades who have fought the federal government for generations. Cliven Bundy, of course, is notable for his refusal to pay grazing fees. For more than a quarter of a century he has run his cattle illegally on federal land, although he insists that BLM has no right to keep him off his “ancestral” range. In 2014, when federal officers attempted to round up Bundy’s cattle and when an armed militia showed up to protect the Bundy family’s rights, a serious confrontation occurred. The showdown ended peaceably, but only after the government acquiesced. That acquiescence led the Bundys and their followers to believe that God was on their side and emboldened the Bundy sons to set up a subsequent confrontation.

This one occurred at the Malheur refuge after contiguous ranchers Steven and Dwight Hammond were imprisoned for illegally grazing their cattle there. In protest, Ammon and Ryan Bundy, plus a host of other out-of-state and heavily-armed men, took over the refuge headquarters and kept federal agents at bay. This well-publicized standoff ended abruptly, too, but not under peaceful circumstances. A law enforcement officer shot and killed one of the protestors. The other occupiers were jailed.

As Quammen develops her assessment of how theology and mythology have dictated land use disagreements and disputes, she uses the Bundys and their enduring conflicts with the United States government as literal and figurative touchstones for how deeply run the currents of distrust and misunderstanding.  Quammen treats the Bundys and so many other rebels in American Zion with respect, even though she disagrees with their political stances and tactics. Effectively and persuasively, she analyzes the roots of their passions. She also manages to point out and then re-emphasize the insistent underlying irony—the land never actually belonged to Bundys. Their ancestors stole it from native tribes, just as the Malheur refuge is confiscated native land, too.

I’m not sure I learned any new facts in American Zion, but I came to think of the patterns in provocative new ways. I admire and appreciate the way Quammen builds and supports her thesis in a scholarly but accessible manner. I found her arguments convincing, and now my own thinking about western public lands is rightly enhanced. Perhaps this is an environmental book best read by those of us already familiar with the issues. We need a fair exposure to those with whom we disagree, and American Zion does just that. Once again, Torrey House Press is to be commended for publishing another dazzling panorama of the modern American West.  –  Ann Ronald

Also available with contributions by Betsy Gaines Quammen: The Earth Will Appear as the Garden of Eden; Snow Leopards; Encyclopedia of Nature and Religion 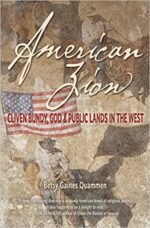 Ann Ronald is a retired English professor from the University of Nevada, Reno. Author of dozens of reviews, she’s also written a number of books about the American West. They include literary studies such as The New West of Edward Abby and Reader of the Purple Sage, cultural studies such as GhostWest and Oh, Give Me a Home, and nature writing such as Earthtones: A Nevada Album. Her latest is a work of fiction, Friendly Fallout 1953. Since retiring, she’s been reading vociferously, so “Bookin’ With Sunny” is giving her a wonderful opportunity to share thoughts about her favorite new discoveries.
More from this reviewer
PrevBad Tourist
What She Left BehindNext