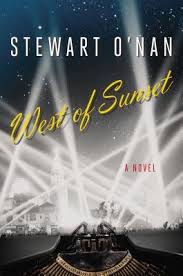 Stewart O’Nan’s novel, West of Sunset, mirrors perfectly the frenetic ennui of F. Scott Fitzgerald’s life and his fiction. West of Sunset tells the story of Fitzgerald’s final years, when he worked on a number of Hollywood films, conducted a notorious affair with gossip columnist Sheilah Graham, and started an unfinished manuscript, (The Love of) The Last Tycoon. Leaving his wife Zelda in a North Carolina mental hospital, Fitzgerald went west to earn money for her keep, to support their daughter’s education, and to sustain his own chaotic lifestyle. O’Nan has taken the framework of Fitzgerald’s life story and transformed it into a fictional reconstruction. The result is an excellent novel that well captures the restless energy of the brilliant but doomed alcoholic artist.

Set in the late 1930s, West of Sunset portrays a Hollywood scene and an array of men and women related somehow to the southern California film industry.The characters in West of Sunset once dominated the tabloid press. Ernest Hemingway, Dorothy Parker, Humphrey Bogart, Helen Hayes, Robert Taylor, Joan Crawford, a cast of hundreds of familiar names. There they are, drinking, carousing, pursuing their careers and a fleeting fame, an elusive notoriety that is finally unsustainable. But they keep on trying. Fitzgerald and Hemingway have already written their best books, Dorothy Parker’s Algonquin Hotel is in the past, and a parade of actors passes by, old familiar faces replaced rapidly by fresh new ones.

Fitzgerald’s own career was on a downhill slide. Assigned as the screenwriter of one movie, he was transferred to another, and another, and another. Physically, he moves from one place to another, too, as his life slowly disintegrates. In poor health, struggling with debt, he reaches out to Sheilah Graham, who is beautiful and younger. He feels guilty about Zelda, to be sure, but he is not at all inclined to give Sheilah up. Nor is he inclined to give up his drinking. He’ll curb it, now and then, but he always returns to his beloved gin.

I must admit that F. Scott Fitzgerald’s novels have always made me uneasy. I respect the brilliance of The Great Gatsby, and have taught it frequently with great success. Exquisitely written, it truly captures the spirit of an age. But I never much cared for its characters. Too much booze, too little concern for other people, too much self-indulgence, too little self-control. And that’s exactly what Stewart O’Nan gets right in West of Sunset. The oxymoron “frenetic ennui” exactly defines Fitzgerald’s world. Bored, he and his friends party heavily, trying to fill every hour with shallow activities and superficial interactions. Yes, they want success, but they’ve lost their youthful discipline (if they ever had any).

Sheilah Graham is a breath of fictional fresh air. A pillar of sanity, she manages to stay sane and sober in an otherwise madcap world. I don’t know much about her life, but I found O’Nan’s Graham to be provocative and astute. I also appreciated his fictional portrayal of Fitzgerald as a man aware of his many foibles yet unable to control his impulses, a flawed figure who is introspective but tragically incapable of change. There are many reasons to like West of Sunset, from these incisive characterizations to the overall textured milieu of 1930s Hollywood. In sum, O’Nan has built a solid novel around a teetering, tottering group of men and women. – Ann Ronald

Also available by Stewart O’Nan: Last Night at the Lobster; Emily, Alone; The Odds, A Love Story; A Prayer for the Dying; Snow Angels; Faithful (with Stephen King); The Night Country; The Speed Queen; The Circus Fire; A Face in the Crowd (with Stephen King); Songs for the Missing; The Good Wife; The Names of the Dead; In the Walled City; A World Away; Everyday People; Wish You Were Here; The Vietnam Reader. 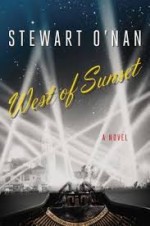 Ann Ronald is a retired English professor from the University of Nevada, Reno. Author of dozens of reviews, she’s also written a number of books about the American West. They include literary studies such as The New West of Edward Abby and Reader of the Purple Sage, cultural studies such as GhostWest and Oh, Give Me a Home, and nature writing such as Earthtones: A Nevada Album. Her latest is a work of fiction, Friendly Fallout 1953. Since retiring, she’s been reading vociferously, so “Bookin’ With Sunny” is giving her a wonderful opportunity to share thoughts about her favorite new discoveries.
More from this reviewer
PrevClaude & Camille (second review)
H is for HawkNext