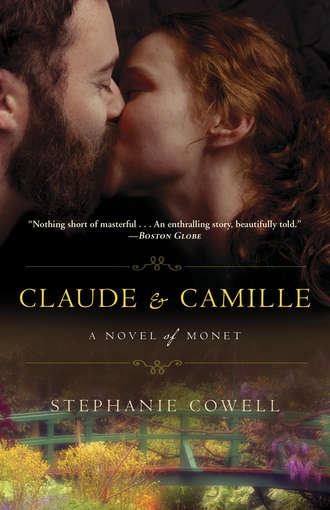 Claude & Camille: A Novel of Monet

Once again I’m going to review a novel written about historic figures, one that fictionalizes the characters and the events preceding their fame. This time that novel deals with the Impressionist painter Claude Monet and his first love, Camille, an upper-class young woman who adored him and who cared little for societal propriety. Together, they struggled to keep their families at bay and to support his artistic career. Stephanie Cowell, writing Claude & Camille: A Novel of Monet, stays true to the chronological details of their relationship, but she adds imaginative dimensions as well. Her “Historical Notes” catalogue what is factually known and what is mere extrapolation on Cowell’s part. I must say that I appreciated Cowell’s fictional additions because they helped make sense of her characters’ motivations.

I also appreciated the design of Claude & Camille. Interludes punctuate the action.Those interludes are occurring many, many years later, when Monet is an elderly man preparing for the unveiling of his water lily paintings.  Unsure about how his new work will be received, he ponders his past, thinking about Camille and all they enjoyed and endured together. The patterned changes between past and present serve to underscore the rhythms of his vocation.  Lows and highs, disdain and acclaim, poverty and fame, difficulty and success, Monet’s career ricocheted from one extreme to another. Cowell word-paints those Impressionistic clouds.

She also clearly understands Impressionism as an artistic concept. Speaking of Monet and his fellow artists, Cowell explains that the school of Impressionism “was always changing; if anyone expected it to stand still, they were wrong.  There were the visible brush strokes of pure color, the emphasis on changing light, the beautiful world of modern daily life throughout the country. There was also their now famous recognitions for painting en plein air.” Cowell draws together an array of painters, reveals how both their art and their lives interacted for a time, and also shows how historic events came to interfere with and then enhance their artistic reputations.

Claude & Camille covers all the bases. Writing this review, I’m remembering all the things I liked about the book. While I was reading it, however, I felt like there was something missing.  I was interested in what the characters were doing, but I wasn’t much affected by what they were feeling. Perhaps this is the result of something I often ponder in “Bookin’ with Sunny,” the fact that a writer of one gender sometimes has difficulty getting inside the heart and mind of someone of the opposite gender. Claude Monet’s passion never seemed quite compelling to me. He spent a lot of time either thinking about his actions or acting thoughtlessly. And I never could quite put those two contradictory characteristics together.

Camille remained unknowable, too, her deeds often inexplicable and her feelings always mysterious. She routinely behaved in totally unpredictable ways. Obviously Camille suffered from some serious mental problems, but Cowell chooses not to probe. Likewise, the surrounding characters seemed more surface than substance. I never really got to know these people, to either comprehend or interpret their motivations.  On the other hand, I thoroughly enjoyed the narrative line. I learned some history I didn’t know about late nineteenth-century France and I came away from the book with a better understanding of how this group of painters never compromised their art. While Claude & Camille may not be the most profound portrayal of history and art, of artists and their imagined lives, it’s far from the worst.  – Ann Ronald 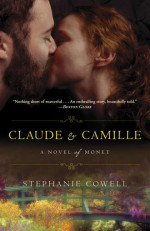 Ann Ronald is a retired English professor from the University of Nevada, Reno. Author of dozens of reviews, she’s also written a number of books about the American West. They include literary studies such as The New West of Edward Abby and Reader of the Purple Sage, cultural studies such as GhostWest and Oh, Give Me a Home, and nature writing such as Earthtones: A Nevada Album. Her latest is a work of fiction, Friendly Fallout 1953. Since retiring, she’s been reading vociferously, so “Bookin’ With Sunny” is giving her a wonderful opportunity to share thoughts about her favorite new discoveries.
More from this reviewer
PrevThe Narrow Road to the Deep North
West of SunsetNext