Home » Reviews » Fiction » We Are Called to Rise

We Are Called to Rise

We Are Called to Rise

When I began reading We Are Called to Rise, I was reminded of a pointillist painting. Four seemingly disparate narrators live in the present while remembering the past in a pastiche of colorful daubs, a series of anecdotal observations and recollections. At first, their stories appear to be totally unrelated but, after a while, the narratives begin to shadow one another and the novel’s artistry emerges. By the time the reader turns the final page, Laura McBride’s talent is on full display, a fully realized portrait of landscape and connected lives.

Most readers will respond to the individual characters. Avis begins her narration at the moment her husband is declaring his love for another woman. Meanwhile, her son’s marriage is in trouble, too. Suddenly her world is spinning out of control. Luis’s world already is out of control. A veteran of three tours of duty in Iraq, he regains consciousness in a Washington, D.C. hospital, unable to reconstruct what happened or why he is there. Eight-year-old Bashkim lives with his younger sister and their Albanian refugee parents, a family also damaged by politics and war. Roberta, the fourth narrator and a volunteer case worker, serves as a narrative link, a reader’s aid to the connections that will emerge.

Avis, Bashkim, and Roberta live in Las Vegas, a city bright with contrasts and colors, a valley stretched “out peacefully below a blue sky, when the knife-edged hills that surround are pleated with shadows of a sideways slicing sun,” a place where drivers are “jolted to attention by the careening traffic, the cars pouring onto the freeways, the trucks filled with produce or gasoline or maybe chemical waste.” Roberta’s description of their hometown (where Luis was born, and where he will return, if and when he recovers) replicates the staccato rhythms of these characters’s lives. An array of emotions bounces from serenity to frenetic activity, from love to uncontrollable violence and back to love again.

In one way or another, all of McBride’s characters suffer from post-traumatic stress, although she never uses that phrase to describe their trials. Rather, the reader must piece together how the past has affected the present, and how the future might unfold. War, in one way or another, is a culprit in We Are Called to Rise. How Avis, Bashkim, and Luis lift themselves above the hostilities is at the heart of this remarkable first novel. Reading its pages is excruciating at times, but the reward is stunning. I’ll be thinking about this book for a very long time, and pondering its emotional impact.

A few days from now, Laura McBride will receive a Silver Pen Award from the Nevada Writers Hall of Fame, recognizing her achievement. I hadn’t planned on attending. Now, I wouldn’t miss the chance to applaud what she has accomplished in writing We Are Called to Rise. It is a spectacularly accomplished first novel, and I look forward to reading many more of her creations. – Ann Ronald

We Are Called to Rise, Laura McBride’s debut novel, was the 2015 Nevada Reads selection. 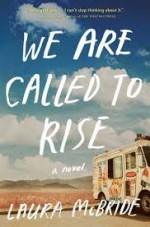 Ann Ronald is a retired English professor from the University of Nevada, Reno. Author of dozens of reviews, she’s also written a number of books about the American West. They include literary studies such as The New West of Edward Abby and Reader of the Purple Sage, cultural studies such as GhostWest and Oh, Give Me a Home, and nature writing such as Earthtones: A Nevada Album. Her latest is a work of fiction, Friendly Fallout 1953. Since retiring, she’s been reading vociferously, so “Bookin’ With Sunny” is giving her a wonderful opportunity to share thoughts about her favorite new discoveries.
More from this reviewer
PrevFlora & Ulysses, a truly squirrelly novel
The Wright BrothersNext