Vinegar Girl – A re-taming of Kate 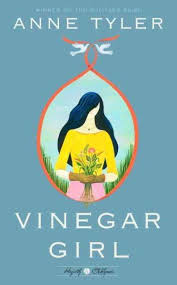 The Hogarth Shakespeare project, by commissioning a number of premier authors to write contemporary novels loosely based on William Shakespeare’s plays, brings those familiar narratives and themes into the twenty-first-century. One of the funniest is Anne Tyler’s Vinegar Girl, a retelling of The Taming of the Shrew. Kate Battista, Tyler’s heroine, seems to be wasting her life. A college drop-out and now a teacher’s aide with little ambition, she keeps house for her eccentric father and tries to supervise her younger sister (who essentially is un-supervise-able).

Dr. Battista is a caricature of a sequestered laboratory scientist unable (or unwilling) to cope with the real world. When he learns that his research assistant’s visa is about to expire, he concocts a curious, self-centered plan. If his daughter will marry Pyotr Shcherbakov, all will be well in Dr. Battista’s lab. Kate, of course, is unwilling to comply, but Pyotr and her father begin a campaign to change her mind. That campaign directs the progress of Vinegar Girl.

Those of us familiar with The Taming of the Shrew know exactly how Vinegar Girl will end, but it’s still fun to follow the machinations of Pyotr and Kate’s father. Kate’s sister, Bunny, is fun, too. An undisciplined teenager who loves to defy authority, and someone who is just developing her own sexual persona, she is horrified by the two men trying to dictate Kate’s life. First she ignores Pyotr, then she tries sabotage. She tries to talk Kate out of the arrangement, but finally she acquiesces because she realizes that if Kate marries, she’ll get her big sister’s bedroom. Bunny’s erstwhile boyfriend gets involved, too. He is a bit of a grifter, but more importantly he is a master of hilarious disruption.

Tyler chooses to ignore the multiple subplots of The Taming of the Shrew, focusing solely on Kate and her immediate family. Well aware, however, of the rich Shrew history, she writes lines such as Pyotr’s heartfelt, “Kiss me, Katya,” to remind the reader of Cole Porter’s adaptation of Shakespeare’s classic comedy. She also parodies the interactions between the original Baptista Minola and his protégé Petruchio. Then, of course, there is Kate herself, an opinionated woman who simultaneously acts self-sufficiently and self-deferentially. She’s not Elizabeth Taylor of Hollywood Shrew fame, but she’s very effective at playing her role.

If the other Hogarth Shakespeare adaptations are as winning as Vinegar Girl, they must be delightful to read, too. Margaret Atwood retells The Tempest, for example; Edward St. Aubyn, King Lear. Vinegar Girl is the ninth in the series, with more planned for future publication. Taken all together, the novels offer a fresh take on the old bard’s words. Purists may carp, but book-lovers will rejoice at the creativity someone like Anne Tyler displays. – Ann Ronald

Also available by Anne Tyler: A Spool of Blue Thread; Breathing Lessons; The Accidental Tourist; Dinner at the Homesick Restaurant; The Beginner’s Goodbye; Ladder of Years; Saint Maybe; Digging to America; Back When We Were Grownups; The Amateur Marriage; If Morning Ever Comes: A Patchwork Planet; Noah’s Compass; The Clock Winder; Searching for Caleb; Morgan’s Passing; The Tin Can Tree; Earthly Possessions; A Slipping-Down Life; Timothy Tugbottom Says No!; Celestial Navigation; Tumble Tower. 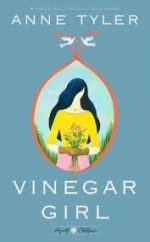 Ann Ronald is a retired English professor from the University of Nevada, Reno. Author of dozens of reviews, she’s also written a number of books about the American West. They include literary studies such as The New West of Edward Abby and Reader of the Purple Sage, cultural studies such as GhostWest and Oh, Give Me a Home, and nature writing such as Earthtones: A Nevada Album. Her latest is a work of fiction, Friendly Fallout 1953. Since retiring, she’s been reading vociferously, so “Bookin’ With Sunny” is giving her a wonderful opportunity to share thoughts about her favorite new discoveries.
More from this reviewer
PrevWild at Heart – A National Treasure at Risk
The Return: Fathers, Sons and the Land in BetweenNext