Home » Reviews » The Return: Fathers, Sons and the Land in Between

The Return: Fathers, Sons and the Land in Between 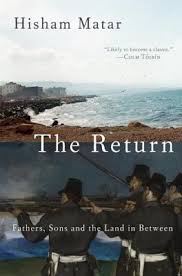 One of the delights of “Bookin’ with Sunny” is discovering books and authors you otherwise might miss. That’s true for reviewers as well as for readers.  I confess that I read somewhat narrowly—more contemporary British and American prose than African or Asian or even continental writing. So without Sunny’s urging, I might never have opened Hisham Matar’s The Return. What a loss that would have been! Libya, beautiful but historically terrorized, unfolded in provocative ways I had never understood before.

Hisham Matar, author of two highly regarded novels—In the Country of Men and Anatomy of a Disappearance—has published a new memoir that takes the reader into the psychological depths of modern Libya. When Muammar Qaddafi deposed King Idris in 1969, Hisham Matar’s family and most especially his father, Jaballa, quietly began a resistance movement. The more Qaddafi cracked down on dissidents and freedom of speech, the more a skein of Matar relatives plotted financial and military insurrection. To no avail.

In 1990, while Hisham was away at college, his father and most of his uncles and cousins were arrested and thrown in Abu Salim, a notorious Tripoli prison known as “’The Last Stop’—the place where the regime sent those it wanted to forget.” Some languished there for more than twenty years; others, including Jaballa Matar, disappeared completely. For a few years his wife and his two sons heard from him sporadically or about him occasionally, but then came silence, a silence that continues to prey on the family’s minds.

Desperately wanting to know his father’s fate, Hisham yearns for closure. The Return does more than trace his ongoing search for the details of his father’s imprisonment, however. At the same time, his memoir offers a sweeping view of Libyan history, an in-depth look at Qaddafi’s particularly brutal regime, combined with a touching rendition of Hisham’s personal return to his native land, a landscape he hadn’t seen since he was a boy. The Return opens in 2012, shortly after Qaddafi’s death. Able to travel to Libya for the first time in decades, Hisham and his brother, along with their mother, fly into Benghazi. They then travel throughout Libya, reuniting with countless relatives and listening to their stories of hardship and deprivation. They meet survivors of Abu Salim, hearing more stories not only of difficulties but of utter degradation.

As a reader largely innocent of Libyan history and culture, I found Hisham’s insights utterly eye-opening. As he so succinctly states, Libya has always been “but an opportunity for foreigners to exorcise their demons and live out their ambitions,” not a country in the traditional sense of the word. In prose that is spectacularly acute, Hisham describes the land itself in ways that turn a colorless desert into a rainbow of light and dark. He also introduces a world of culture and poetic promise. His father was a writer, too, and while in prison Jaballa recited words he had written and passages he had memorized, uplifting the spirits of his fellow prisoners as they struggled with mayhem and torture. Hisham remembers the father of his boyhood, then imagines the man he must have become in prison. The Return slides into the past, slips back into the present, glides into speculation, circles around imaginary truths. Not only is it one of the best-written memoirs I’ve recently read, it also is perhaps the most provocative. For anyone interested in northern Africa today, I whole-heartedly recommend Hisham Hatar’s The Return.   – Ann Ronald

Also available by Hisham Matar: In the Company of Men; Anatomy of a Disappearance. 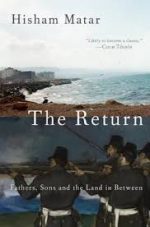 Ann Ronald is a retired English professor from the University of Nevada, Reno. Author of dozens of reviews, she’s also written a number of books about the American West. They include literary studies such as The New West of Edward Abby and Reader of the Purple Sage, cultural studies such as GhostWest and Oh, Give Me a Home, and nature writing such as Earthtones: A Nevada Album. Her latest is a work of fiction, Friendly Fallout 1953. Since retiring, she’s been reading vociferously, so “Bookin’ With Sunny” is giving her a wonderful opportunity to share thoughts about her favorite new discoveries.
More from this reviewer
PrevVinegar Girl – A re-taming of Kate
Girl in the Blue CoatNext