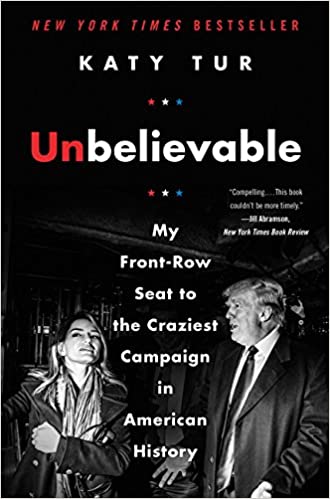 Unbelievable, My Front-row Seat to the Craziest Campaign in American History.

The subtitle of Katy Tur’s Unbelievable characterizes her remembrances perfectly: “My Front-Row Seat to the Craziest Campaign in American History.” From what I’ve watched on cable television, every presidential campaign is madcap mayhem, but the Donald J. Trump campaign in 2015-16 was probably the most tumultuous of all. Katy Tur, NBC and MSNBC reporter, covered his crusade every step of the way. She began accidentally. Available on short notice, she was sent to report on the first few days of the Trump campaign. Like everyone else, she expected her assignment to be short-lived, but days, and then weeks, and then months of chaotic electioneering ensued. Katy had a front-row seat to every hectic minute.

(I’m going to call her Katy in this review because, as she notes in Unbelievable, regular cable tv watchers often regard reappearing reporters as familiar family friends. I’ve seen her on the screen so many times that I already thought I knew her. Unbelievable just makes the “real” Katy more real to viewers and readers like me.)

Using her notes, newspaper accounts, the network’s film clips, her own recollections, and those of her fellow reporters, Katy reconstructs the unexpected twists and turns of Trump’s erratic progress toward the presidency. She does so in a stampeding prose that mimics the hoofbeats of campaign workers trying to rein in their impulsive candidate, sycophants hoping to let him run free, and dozens of journalists competing for every available avenue of access and every morsel of pertinent or impertinent information. The pages of Unbelievable burst with energy. I confess, a rodeo metaphor comes to mind, with Trump bucking off one-liners, indiscriminate half-truths and lies, while kicking and twisting under the restraints of truthful television coverage.

What a ride! Katy shares the most memorable moments. Some we political junkies know well—the multiple insults to various ethnic groups, the incessant Republican debates and their unfortunate digressions, the Access Hollywood tape revelations, the frequent incitements to mayhem and violence. Katy writes intimately about her personal feelings when Trump singled her out, as he often did, in effect encouraging his followers to regard her with unconcealed malevolence. I didn’t realize that the network finally had to hire security to ensure her safety. In fact, despite her overt focus on Trump’s campaign, Katy shares many unexpected insider details about what happens behind the scenes when the cameras are turned off. Some of the exchanges between reporters are hilarious, some of the rivalries are surprising, and some of the enduring friendships are charmingly unexpected.

Just as she charges forth with her galloping prose, Katy organizes Unbelievable in a way that echoes the frenetic pace of the events she covers. She ranges between individual campaign events, with their repetitively frantic and unforeseen patterns, and the grand finale, election day itself. Those election day snippets offer eye-popping insights into the unpreparedness that underlies so much of the Trump endeavor. They also reveal Trump’s exceptional and uncanny ability to win, to always score the highest ride. Intermingled, too, are revealing insights into Katy’s personal life. We learn about her unconventional parents and upbringing, which set her on her way to a journalistic career. We also learn about the boyfriend she abandons and the European NBC stint she was so enjoying in order to follow Trump’s campaign trail. She is forthcoming, too, about her personal reactions to Trump campaign antics. Much to her surprise, she’s not at all surprised when he is declared the presidential winner, though perhaps hindsight also contributes to Unbelievable in significant ways.

I’ve read, and reviewed in “Bookin’ with Sunny,” many books about politics. Unbelievable is one of my favorites, an insider’s bruising ride along oxbow bends that are all too believable. What’s unbelievable, perhaps, is the end of the trail.  – Ann Ronald 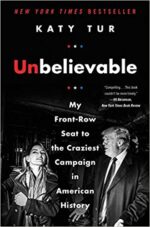 Ann Ronald is a retired English professor from the University of Nevada, Reno. Author of dozens of reviews, she’s also written a number of books about the American West. They include literary studies such as The New West of Edward Abby and Reader of the Purple Sage, cultural studies such as GhostWest and Oh, Give Me a Home, and nature writing such as Earthtones: A Nevada Album. Her latest is a work of fiction, Friendly Fallout 1953. Since retiring, she’s been reading vociferously, so “Bookin’ With Sunny” is giving her a wonderful opportunity to share thoughts about her favorite new discoveries.
More from this reviewer
PrevToo Small Tola
The Winter SoldierNext