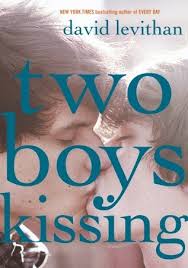 There are times I do not understand the marketing of books. By its hardcover price, $16.99, Two Boys Kissing is marketed for young adults. I am a way old adult and although the $16.99 is much appreciated – it’s my opinion that this novel should be read by everyone.

Two Boys Kissing is not David Levithan’s first book about gay youth, but it’s the first of his that I have read, and from page one I was hooked. “Trust us: There is a nearly perfect balance between the past and the future. As we become the distant past, you become a future few of us would have imagined.”

Are these the two boys kissing? They sound too old. They are too old. These are the voices of the past, a Greek chorus, compassionate guides, not just for the novel’s eight gay teens, but for those who read Two Boys Kissing. So who are these guides? “We are the characters in a Tony Kushner play, or names on a quilt that rarely gets taken out anymore. We are the ghosts of the remaining older generation.” Oh, we readers of that generation might say, I thought that’s who you were.

The eight boys, Neil and Peter, Avery and Ryan, Craig and Harry, Tariq, and Cooper, live in the same or nearby communities. They are all teens. Some of them are falling in love for the first time, two are an established couple, two are breaking up, one has been beaten up for being gay, and one is suicidal

Craig and Harry used to be a couple, but since breaking up they have maintained a strong friendship and as friends they make a vow to break the world record for the longest kiss. They fine-tune the event with help from high school friends and teachers, especially Tariq, who has recovered physically from his attack but still has an emotional score to even. Harry’s parents support the boys in their effort to make public what has been hidden for too many years. Craig both wants and doesn’t want his parents to find out what he and Harry have planned.

Avery and Ryan meet at a gay prom night held at a community center, attracting teens from towns as far as forty miles away. Avery is from the host town and Ryan from Kindling, the next town over. Their attraction is innocently powerful. The voices from the past observe, “We can tell immediately that they’ve never met, and that they are going to.” And again, “We remember what it was like to meet someone new. We remember what it was like to grant someone possibility.” This is one of the many times in Levithan’s book when an older reader, maybe a parent or grandparent, will read something and think to themselves, Yes, that’s exactly how it was!

Levithan paces the novel perfectly, breaking each boy’s story with enough page space to slip easily into what is happening to the next boy or boys. As the reader begins to engage with Craig and Harry’s quest, she also follows Cooper into a deep and ever-isolating depression fed by self-loathing and despair. The voices are compassionate in their words of comfort and hope, “Love, he thinks, is a lie that people tell each other in order to make the world bearable…. We want him to consider that love does make the world bearable, but that does not make it a lie.”

Cameras are set up and Internet connections are made with sufficient lighting to ensure the event’s visibility for the more than twenty-four hours they will kiss. The kiss goes viral, not just online, but within the town and neighboring communities. The hours pass, the difficulty of remaining upright, staying awake, intensifies, as do the lives of the other boys and their families and friends. Two Boys Kissing is a novel expressing the vitality of friendships. Caitlin is Ryan’s best friend, “All she has to do is like him, and love him, and both are things she does well.” And equally vital and honest are those who hate and fear. They come to the park in cars, screaming “Faggots” out the windows, eggs are thrown, and the police come, too.

In between the “kiss,” the story goes backward and forward, describing which parents know, which do not, which secrets are coming out, and all the while the chorus reminds both the boys and the reader of the future: “What a powerful word, future. . . . And how tragic not to consider it.”

The answer is the same for all of us, to love and to be loved, to care and to be cared about. The voices from the not-too-distant past remind the boys:

And my personal comment to David Levithan: I wish your book had been around much earlier.     – Sunny Solomon

Also available by Levithan: Will Grayson (with John Green); Every Day; The Lover’s Dictionary; Dash & Lily’s Book of Dares (with Rachel Cohn); Boy Meets Boy; The Realm of Possibility; Nick & Norah’s Infinite Playlist (with Rachel Cohn); How They Met and Other Stories; Every you, Every Me (with Jonathan Farmer); Love is the Higher Law; Invisibility (with Andrea Cremer); Wide Awake; The Full Spectrum (with Billy Merrell); Naomi and Ely’s No Kiss List (with Rachel Cohn); Up all Night, A Short Story Collection (with Peter Abrahams, Libba Bray, Sara Weeks); Are We There Yet?; Marly’s Ghost (with Brian Brian Selznick); 21 Proms (with Daniel Ehrenhaft); Where We Are, What We See; Ten Things I Hate about You; The Perfect Score; In the Heart of the Quake; You Are Here This Is Now: Poems; 101 Ways to Get Away With Anything; 101 Ways to Stop Beeing Bored; Charlie’s Angels: Full Throttle; The Mummy, A Junior Novelization; Six Earlier Days. 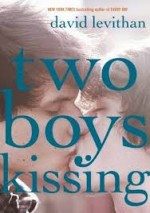 Sunny Solomon holds an MA in English/Creative Writing, San Francisco State University. She is a book reviewer for “The Clayton Pioneer” and her poetry and other writing has been published in literary journals, one chapbook, In the Company of Hope and the collection, Six Poets Sixty-six Poems. She was the happy manager of Bonanza Books, Clayton, CA and Clayton Books, Clayton, CA. She continues to moderate a thriving book club that survived the closure of the store from which it began. Sunny currently lives next to the Truckee in Reno, NV.
More from this reviewer
PrevTwo Boys Kissing Reviewed by Ann Ronald
The Mold in Dr. Florey’s CoatNext