The Mold in Dr. Florey’s Coat 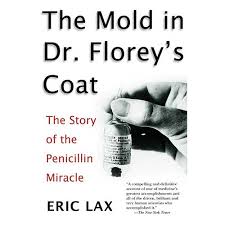 The Mold in Dr. Florey’s Coat: The Story of the Penicillin Miracle

There is some truth in the seldom-practiced adage: “It is amazing what you can accomplish if you do not care who gets the credit.” Without ever specifically citing it, Eric Lax parses the adage finely and with subtlety in this engaging book, The Mold in Dr. Florey’s Coat.

Great scientific breakthroughs are not usually the work of one scientist, so credit may be spread, or not. Newton famously said that he stood on the shoulders of Galileo while at the same time developing his most necessary mathematical tool, calculus, simultaneously but unknowingly with Leibniz. They sparred about the priority of calculus’s creation till they died. Scientists, being human, often bicker about who deserves credit for what. The British scientists involved with the discovery and clinical application of penicillin, one of the most far-reaching medical discoveries of the 20th century, tried to stay calm and relatively ego-less. They kept the bickering under control, but the fame machine wanted a hero, a single creative genius.

As Lax emphasizes, Alexander Fleming indisputably discovered penicillin in 1928. One day he noticed that bacteria in a petri dish had died, presumably when they came in contact with a previously unknown and unnamed mold. He called the mold penicillin. Fleming, however, is generally associated with both penicillin’s discovery and its subsequent fame as the first antibiotic. Soon after its discovery, Fleming set it aside as an interesting but unmanageable compound and redirected his inquisitive mind elsewhere. It was all but forgotten. Ten years later a separate group of Oxford scientists uncovered his discovery in an obscure journal and decided to see what they could make of penicillin. The members of this group never became household names, but they were the ones who overcame numerous, complicated barriers to re-discover, stabilize, purify, clinically test, and promote interest among governments, funders, and pharmaceutical companies. The first antibiotic revolutionized the treatment of a half-dozen often mortal infections.

In 1940, Howard Florey, Ernst Chain, Norman Heatley, and several of their Oxford colleagues produced penicillin with a miniscule budget and equipment that would have made Rube Goldberg blush. In 1942, their work helped heal a woman who would otherwise have undoubtedly died, the first person so saved. In the next three years, penicillin saved hundreds of thousands of wounded Allied soldiers, sailors, and airmen, and some civilians as well.

By 1945 the penicillin scientists were high on the potential Nobel Prize list for medicine. By this time, Alexander Fleming had become famous for his 1929 discovery. The others languished in obscurity, in part because their director, Howard Florey, refused to give interviews to the media. It appeared that Fleming would get the prize alone, but enough people knew the rest of the story that Florey and Chain were nominated, too. Heatley, whose contributions were vital, was excluded because the prize could be split among three people only.

In the end, despite the tripartite Nobel Prize, Alexander Fleming continued to receive public credit while Florey and Chain remain relatively neglected. Heatley was completely ignored by the fame machine. All of them continued to have distinguished careers and received heaps of recognition from their peers and scientific societies. Three of them received knighthoods. Florey became president of the Royal Society, the most distinguished scientific society in the English-speaking world. Interestingly, none of them—not even Fleming—received any money from their work with penicillin. British physicians at the time resolutely refused to claim compensation for their patentable discoveries. Those attitudes were about to change.

The Mold gives us a glimpse into how medical science was conducted in Britain before the advent of Big Pharma. Those scientists, on balance, were arguably as interested in furthering science than receiving credit. Yes, they wanted credit especially from their peers; but as Lax carefully details in The Mold in Dr. Florey’s Coat, furthering science was often a higher value.   – Neal Ferguson 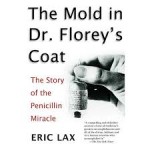 Neal Ferguson is a self described Anglo-phile. After studying for a PhD in British history and doing research for a year in various British archives, he came to the University of Nevada in 1970 to teach. Soon he found himself in administration where he remained until 2003. After returning to full-time teaching a decade ago, he decided to concentrate his teaching energies on Medieval British history and various global aspects of World War II. Dedicated to Ambrose Bierce’s proclamation that the purpose of war is to teach Americans geography, Neal insists that his students accompany him (in class) to sundry east European rivers and steppes, African deserts and jungles, south-east Asian mountain ranges and peninsulas, and small islands and coral reefs in the Pacific. Currently he is writing a book about the ups and downs of General Douglas MacArthur’s military reputation.
More from this reviewer
PrevTwo Boys Kissing Reviewed by Sunny Solomon
Tahoe Ghost BoatNext