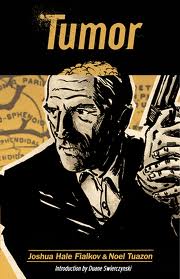 Inspired by the pulp magazine detective stories of the 1930‘s and ‘40‘s, Tumor is a graphic novel gathering in book form the eight parts that originally appeared serially on Amazon Kindle. We’re a long way from the humble comic book.

In a particularly gritty downtown Los Angeles, Frank Armstrong is the P.I. hired by a gangster to find his missing daughter. But Frank is also dying of a malignant brain tumor and this colors the way the story unfolds. Because of his condition, Frank suffers frequent blackouts, but to the reader, these episodes are something stranger. At these times, the characters seem to change identities, moving backward and forward in time, making the truth seem less than fixed.

Tumor has its antecedents in the pulps when Philip Marlowe or Sam Spade are sandbagged and the narrative line clouds over. For Frank, a blackout sometimes leads to greater insight. More often, it leaves him confused (not to mention the reader). The author acknowledges being inspired by the film noir classic D.O.A., made in 1950. In it, detective Edmond O’Brien is poisoned with “luminous toxin” which eventually kills him. Before expiring, he spends the rest of the film tracking down the man who murdered him. Like O’Brien’s character, Frank fights an impossible deadline to both find the girl and stay in touch with reality.

The problem with this kind of story is that given the terminal illness suffered by the principal character, it’s understandable if the reader, too, gives in to despair. Traditionally in pulp detective fiction, the P.I. overcomes despair through sheer toughness, but Frank’s story is a metaphor for today’s more pessimistic times. Despite all this, you have to admire Frank for his gutsy willingness to buck the odds.

Back in the 21st century, Tumor, the book, comes with deleted scenes and a couple of essays in the manner of a DVD. These materials really enhance one’s enjoyment of the product, clearing up a number of details that would otherwise remain muddy.

Noel Tuazon’s artwork is well done, eloquently capturing the persistent brain fog suffered by Frank. The artist has chosen not to depict facial expressions too clearly. This can be a problem since some of the characters are not who they seem to be. But Tumor is a graphic novel willing to reward an adult readership willing to meet it half-way.

Support your local community’s economic growth by shopping for books
at your independent bookstore in person, online at their website, or by phone.

Where Light Comes and Goes

Dan Erwine holds a BS in Telecommunications, San Diego State University. Dan recently retired after four decades in radio broadcasting. His background San Diego stations KFSD and NPR's KPBS, and KUNR, Reno, NV. Over the years, Dan has produced and hosted a number of talk shows and interviewed over five thousand writers in almost every genre and career, from such notables as David Brin to Seamus Heaney, Allen Ginsberg, Judy Collins, Charlton Heston and Wally Schirra. Dan is a comic book aficionado and has a special interest in film, science fiction and mystery. He lives with his wife in Reno, NV.
More from this reviewer