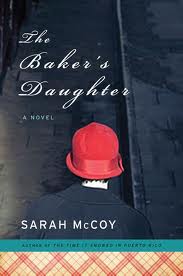 The Baker’s Daughter is about as complex a novel as the title seems simple. The daughter is Elsie Schmidt of Garmisch, Germany. The novel’s Prologue introduces us to Elsie’s mother, not only the wife of a baker, but the keeper of secrets. Germany, July 1945 should set off alarms, but McCoy doesn’t take the most direct route to her story, jumping ahead in Chapter One to El Paso, Texas, November of 2007.

The novel has two protagonists: Reba Adams, who left her family in Virginia to pursue a writing career in El Paso, Texas, and war-bride Elsie Schmidt Merriwether, once of Garmisch, Germany, but now also of El Paso.

Reba, a journalist for a local El Paso magazine, is assigned to interview Elsie, the owner of a popular El Paso German bakery, for a piece on German Christmas traditions in the magazine’s December issue. Author Sarah McCoy does not so much weave the stories of these two women together as shows their lives in parallel. Elsie’s life as a baker’s daughter living in Germany as it nears defeat is told through letters and flashbacks, and Reba’s as a young writer finding her voice and her way in the world is told in a troubled present. When the two women meet and the interviews begin, their stories continue to be told side by side. The lines do not cross until the interview stalls and Reba wonders if she will make her deadline. McCoy nails it with the observation: “It was the Nazi thing.” Not just for Reba, but for the reader as well. We all know parallel lines can never meet, but McCoy proves this rule wrong.

This is a novel of mothers and daughters, sisters (and grandmothers), of romance, love, war, fear, insecurity, patriotism, cowardice, lies, despair, and, ultimately, truth and understanding. Elsie’s courage is not only in surviving the Third Reich, but in recognizing that Germany was no longer the country she loved as a girl; and her story echoes in Reba’s struggle to deal with the reality of her life as a writer and as the fiancée of Ricki Chavez, a Border Patrolman involved in the roundup and detention of illegal immigrants. The 62 years between 1945 and 2007 become uncomfortably clouded. Reba’s magazine article becomes something very different from what she intended to write.

McCoy’s novel is not about the culpability of a nation, but rather the understanding of how human hearts can remain unmoved in the face of inhumanity. In spite of some unevenness, I think the novel succeeds. What brought the two women together, while sharing coffee and fine baked goods, was the sharing itself, which is always a path to understanding ourselves and each other. The inclusion of recipes for some of Elsie’s baked treats at the end of the book was a distraction for this reader, but who knows? If even one of the recipes turns out, eaten with a good cup of coffee or tea, may get the reader to thinking; and what novelist could ask for more than that?

Sunny Solomon holds an MA in English/Creative Writing, San Francisco State University. She is a book reviewer for “The Clayton Pioneer” and her poetry and other writing has been published in literary journals, one chapbook, In the Company of Hope and the collection, Six Poets Sixty-six Poems. She was the happy manager of Bonanza Books, Clayton, CA and Clayton Books, Clayton, CA. She continues to moderate a thriving book club that survived the closure of the store from which it began. Sunny currently lives next to the Truckee in Reno, NV.
More from this reviewer
PrevPlant a Kiss
TumorNext