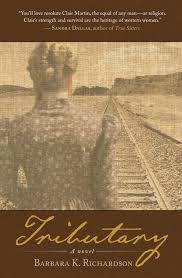 “My childhood among the Saints was no such thing. In a land built on belonging, I did not.” These first two sentences of Barbara Richardson’s new novel, Tributary, led me to expect this book would be the typical story of overcoming adversity and have the even more stereotypical “happily ever after” ending. It isn’t, and it doesn’t.

Yes, there is adversity, a lot of it. Clair, an orphaned girl “cursed” with a birthmarked cheek is used and abused. There is illness, death, bigotry in many forms, painful and disappointing relationships, a fruitless search for parents, and more. However, all of this is woven into a very credible story of an unusual young woman growing, questioning, learning, and resolving to be her own person. Growing physically and mentally is agonizing, as Clair learns how vulnerable she is, young and very much alone; how the Mormon Elders and the church view her and, as she attempts to understand the church, its power and its influence.

The story is a journey, too. A journey of the spirit as Clair discovers who she is and what she wants, and actual travel as she journeys from the Utah desert’s wide open spaces to the claustrophobic humidity of the south in search of her family, and finally the journey back north. It is in the south she learns to love and becomes mother to an orphaned black boy.

“Weaving gives you time to think. Time to feel things in your hands. Time to see patterns everywhere and sense the patterns behind every thing.” Through creating patterns in her weaving, Clair sees patterns in life. Finally having time to think, she realizes that because she is different, she has more control over and more choices in her life than do most other women. It is at this time she begins to realize her capabilities, but it takes much longer for her to recognize and use her strengths.

Tributary does not end in the usual “happily ever after” way, instead the author chooses a more than satisfying conclusion to Clair’s travails when Clair realizes she has the ability to keep her unusual family together and make a comfortable life for them.

Richardson writes in a deceptively simple style that beautifully and poignantly reflects the life and times of the late 1880s. Tributary is her second novel and is based on stories from her Mormon ancestors. Tributary was a 2013 finalist in the Willa Literacy Award: Women Writing the West. This award, named for Willa Cather, is for outstanding literature featuring women’s stories set in the West. The praise for this novel is much deserved.    – Vivienne French

Vivienne French was born in New Zealand and grew up a voracious reader, much to the thanks of her “Mum” and fourth grade teacher, Mr. Sanders. Her short stories and articles have been published in women's magazines, specialty magazines and her hometown newspaper. She has been a resident of Reno, Nevada for twenty-nine years and has worked professionally for a number of nonprofit service organizations. She currently teaches grants writing at Truckee Meadows Community College and serves on the board of the Friends of Washoe County Library. She looks forward to getting back her favorite pastime, reading for the love of reading.
More from this reviewer
PrevLittle Century
Atomic Comics, #2Next