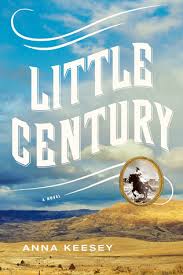 You are eighteen years old, the year is 1900 and your mother has died suddenly of a stroke. Your only known relative lives thousands of miles away from Chicago, somewhere on a ranch in the high desert of Oregon. What you know about yourself is that you know very little of life. With an image of the courageous journalist Nelly Bly in front of her, Esther Chambers writes to her distant cousin, who responds with an offer to visit him at Two Forks. Esther arrives in Oregon, tired and stiff from her four- day train ride, only to find that her destination of Century is two hours away by wagon, and Two Forks, farther still.

Ann Keesey’s debut novel, Little Century, once read, will not be easily forgotten. It is a romance, not only of the heart, but of the land itself. It’s a wide open land, not at all the place of beauty Esther had been told about; and Century is a town far from the hustle and bustle of an industrious Chicago, but a town with possibility if cattle ranchers can keep the sheepherders at bay, if water rights can be secured by hook or crook, and if enough palms can be greased to induce the railroad to lay down tracks so that cattle can profitably reach the eastern markets with meat on the bone.

Before leaving for Two Forks, Esther, influenced by her cousin Ferris “Pick” Pickett and emboldened by her thoughts of risk-taking Nelly Bly, lies about her age and illegally obtains a claim to abandoned property near Pick’s ranch.

Little Century has been described as a coming of age story. Keesey rightly suggests that we can come into our own at any time, not just in our early teens. “Esther has never imagined a land so fruitless.” She arrives in the winter. “Under snow is thin, silky dirt, and under that, rock . . . eerie rock; it has flowed from inside the earth through some unnatural crevice, blackening the landscape like Hades’ chariot.”

Like the wide open high desert itself, Keesey leaves room for her characters to grow. Left to her own devices, Esther becomes the observer, not just of her cousin Pick, but of herself, the buckaroos on the ranch, the sheepherders, the school teacher who secretly prepares Esther for high school graduation tests, and the townsfolk, from the minister to the shopkeeper and everyone in between. Century is no different from other communities in its secrets, but with only flashes of spring and winter and barrenness for most of the year, secrets in Century are difficult to hide.

Esther moves across this unknown landscape with an innate sense of judgment of her own actions, missteps and otherwise. The life of Century, Oregon, mirrors the lives of its ranchers, its sheepmen, its residents and their willingness to enter the twentieth century. Little Century is a novel of conclusions and beginnings. It is a reminder of our own journeys, our own landscapes.   – Sunny Solomon

Sunny Solomon holds an MA in English/Creative Writing, San Francisco State University. She is a book reviewer for “The Clayton Pioneer” and her poetry and other writing has been published in literary journals, one chapbook, In the Company of Hope and the collection, Six Poets Sixty-six Poems. She was the happy manager of Bonanza Books, Clayton, CA and Clayton Books, Clayton, CA. She continues to moderate a thriving book club that survived the closure of the store from which it began. Sunny currently lives next to the Truckee in Reno, NV.
More from this reviewer
PrevThe Ginger Man
TributaryNext