Home » Reviews » Fiction » This is Your Life, Harriet Chance!

This is Your Life, Harriet Chance! 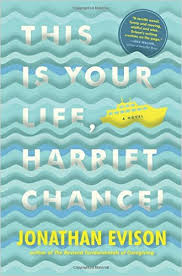 This is Your Life, Harriet Chance!

I’m not sure you must be over the age of seventy to read This is Your Life, Harriet Chance!, but I’m pretty sure it can’t hurt. Most books generating a sit-down-and-read-and-don’t-get-up-until-the-end are exciting, nail-biting, plot-twisting, or surprisingly erotic. None of which is true for this fourth novel by California-born, award-winning author Jonathan Evison. I received my review copy in Tuesday’s mail and put it aside until I finished my task at hand. Late in the afternoon, I took it to the couch to give myself a thirty-minute break, but instead read until I’d missed a real dinner. Then I read in bed until sleep took over.

I woke early Wednesday morning with the book and my glasses still on the bed, finishing the book before lunch. I love this novel. It’s the quietly funny, and at the same time refreshingly depressing, story of what seventy-eight-year-old Harriet Chance will learn about herself before she dies. The narrator is never identified, and although Evison is too young to have watched the original “This Is Your Life” TV shows hosted by Ralph Edwards, I’d bet my life that he has watched more than a few archived copies.

The vignettes of Harriet’s life arrive in fits and starts, or, as the narrator says: “The reflective mind is a pinball, pitching and careening, rebounding off anything it makes contact with.” Chapters are not numbered, but dated (m/d/y) and then identified, as in the first chapter, November 4, 1936 (Harriet at Zero). The next caroms to August 11, 2015 (Harriet at Seventy-eight) and so on.

The story is about life and therefore, most naturally, about death. At age seventy-eight, Harriet’s husband Bernard has been dead for almost one year. He is dead, but not gone. “Oh, no,” I can hear you moan, “not another ghost/spirit haunting those left behind story.” No haunting here. Bernard has some unfinished business. He’s begged, then defied the Powers That Be to let him return just until he’s told Harriet what he should have told her long ago. He’s driving Harriet nuts, but she continues to put two cups on the breakfast table each morning. As much as she wishes he’d really leave, after all those years of marriage, she finds solace in putting the cups out. Evison deftly writes Bernard’s character and his afterlife activities with humor and such sincerity that the seriousness of the novel is never lost.

The above is the backstory, but the event moving everything forward is a phone call informing Harriet that her husband had won a gift basket at a silent auction almost two years before. The basket contained tickets for two on an Alaskan cruise ship. Those tickets are about to expire. Does she wish to accept the prize? Harriet has never shown any interest in Alaska, and as much as Bernard, visibly present to Harriet when the phone call is received, obviously cannot take the cruise, he strongly encourages her to go. The reason for bidding on such a prize remains, for the time being, a mystery. Harriet invites her best friend to join her and then makes hasty plans for the cruise. At the very last minute, her friend tells her she will not be able to accompany her. Harriet is ready to call it off, but again Bernard shows up and talks her into it. The decedent now begins to appear in the most public of places and Harriet seems unable not to speak with him. Her children and friends believe the time may fast be approaching when Harriet will need to give up her home and be taken care of. A cruise to Alaska could be just the thing to get her away from it all. A friend will house-sit and her son promises to check in to make sure everything is being taken care of, “taken care of” in the broadest sense of the phrase.

Harriet boards the ship alone only to have her daughter, who believes her mother is too frail to travel alone, joinS her at the ship’s first port of call. This is the child with whom Harriet has always had a difficult and strained relationship. We now have all the major players (yes, of course, Bernard must be aboard, too, as he has yet to say what needs to be said) locked into a static environment from which, except for ports of call, they cannot escape; a kind of familial equivalent to Murder on the Orient Express.

What will be revealed? Why do Harriet and her daughter have such a terrible relationship? If Harriet knows the answer, will she tell her daughter before the cruise ends? How has Harriet survived an unsatisfactory marriage for so long? What is it that Bernard must tell her and why is he willing to risk his eternal soul to tell her? And finally, what is the secret Harriet has carried with her from childhood to her very old age?

Evison has written a story about the many stories held within the Chance family. The clues are there, but just like real life, reality’s discomfort is often reason enough to pass them by, and then to ask, why didn’t we see that? If you are a mature reader, pass the book on to your adult offspring and grandchildren. If you are a baby boomer or millennial and read it, call your parents and grandparents, if still living, and talk to them. I have my own very personal reasons for highly recommending It’s Your Life, Harriet Chance! One of those reasons is the powerful and emotional honesty with which it is written. – Sunny Solomon

Also available by Jonathan Evison: The Revised Fundamentals of Caregiving; West of Here; All About Lulu. 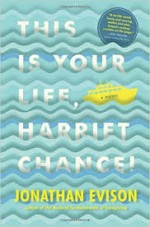 Sunny Solomon holds an MA in English/Creative Writing, San Francisco State University. She is a book reviewer for “The Clayton Pioneer” and her poetry and other writing has been published in literary journals, one chapbook, In the Company of Hope and the collection, Six Poets Sixty-six Poems. She was the happy manager of Bonanza Books, Clayton, CA and Clayton Books, Clayton, CA. She continues to moderate a thriving book club that survived the closure of the store from which it began. Sunny currently lives next to the Truckee in Reno, NV.
More from this reviewer
PrevRobert Oppenheimer
My Life in MiddlemarchNext