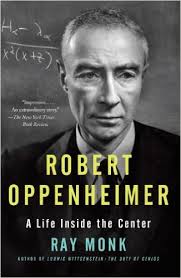 Robert Oppenheimer: A Life Inside the Center

Ray Monk previously wrote an excellent biography of Bertrand Russell in which he helped me, at least temporarily, to understand the intricacies of symbolic logic and Russell’s famous philosophical paradox. In this biography of Oppenheimer, “the father of the atomic bomb,” Monk takes as his special objective the clarification of Oppenheimer’s and other physicists’ contributions to nuclear physics and to the study of big stars. Monk has a talent for making highly abstract ideas intelligible to us lesser beings.

Although there have been several other compelling biographies of Oppenheimer, Monk’s biography, an exegesis of intellectual and scientific history, is a wonderful read. What sets it apart is the depth and clarity that Monk achieves in his concentration on Oppenheimer’s science. But this is a full biography and not just an intellectual history.

When reading about Oppenheimer, it is tempting to allow one’s self to be seduced by Oppenheimer’s notoriety. After all, this man of towering intellect, who had no prior administrative experience, directed the most complex scientific and engineering challenge of the twentieth century—the creation of the atomic bombs. He managed thousands of employees at Los Alamos not to mention dozens of Europe’s and America’s leading physicists and scientists. By their own admission, Oppenheimer was able to guide and nourish these brilliant men, helping keep their egos gratified but in harness, while relentlessly pushing forward the Manhattan Project. After Los Alamos became public knowledge in 1946, he was welcomed into the nation’s halls of power as America’s most famous scientist.

And soon he was also to be its most controversial. The roots of his controversial reputation appear to have been his political radicalism in Berkeley during the 1930’s, a radicalism that drew him to the edges of the Communist Party, that led him to marry a former Communist Party member, and that provided enough suspicious smells for American counter-intelligence agents to sniff along his trail for more that fifteen years. They were convinced that he was engaged in espionage for the Soviet Union. Although Monk argues convincingly that Oppenheimer was an exceptionally loyal American, intelligence agents and the McCarthy bloodhounds finally cornered him during America’s paranoid, Red-hunting binge in the early 1950’s. They managed to convince powerful people that Oppenheimer had failed the test of loyalty by his youthful radical associations and by his opposition to atomic weapons after 1945. Ironically, the removal of his top-secret security clearance seemed to enhance rather than diminish his reputation and popularity. This led Einstein to observe that Oppenheimer’s girl friend (the United States Government) didn’t reciprocate either his love or loyalty.

While youthful political radicalism may have been his Achilles’ heel as an adult, Monk offers a complex, nuanced interpretive thread that runs through Oppenheimer’s life. He was driven, competitive, and a show-off. He was the smartest kid in every one of his classes—always. At Harvard he didn’t major in physics; he had never taken a physics course before appearing in graduate level courses as a sophomore. He studied and mastered anything that interested him. Many things caught his attention and his prodigious concentration such as Sanskrit, Indian literature, poetry, art, and the American southwest. (Later he would reject utterly C.P. Snow’s famous argument in Two Cultures.) He became extremely charismatic, attracting graduate students and research fellows to UC Berkeley, helping to create an American prowess in physics to rival and surpass Europe’s previously unchallenged preeminence.

Although he was a “Renaissance Man,” as well as brilliant, handsome, and charismatic, his narcissism often alienated others. Monk shows us that he could sometimes charm those who would otherwise have been his antagonists. Generally, due to his rudeness, his incessant need to show off, and his competitive tendency to bully, Oppenheimer tended to make unnecessary enemies. Monk suggests that his social failures actually contributed to his post-war problems. Oppenheimer remains always fascinating and a bit mysterious.   – Neal Ferguson 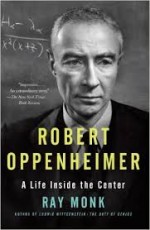 Neal Ferguson is a self described Anglo-phile. After studying for a PhD in British history and doing research for a year in various British archives, he came to the University of Nevada in 1970 to teach. Soon he found himself in administration where he remained until 2003. After returning to full-time teaching a decade ago, he decided to concentrate his teaching energies on Medieval British history and various global aspects of World War II. Dedicated to Ambrose Bierce’s proclamation that the purpose of war is to teach Americans geography, Neal insists that his students accompany him (in class) to sundry east European rivers and steppes, African deserts and jungles, south-east Asian mountain ranges and peninsulas, and small islands and coral reefs in the Pacific. Currently he is writing a book about the ups and downs of General Douglas MacArthur’s military reputation.
More from this reviewer
PrevResorting to Murder
This is Your Life, Harriet Chance!Next