Home » Reviews » The Weight of Snow

The Weight of Snow 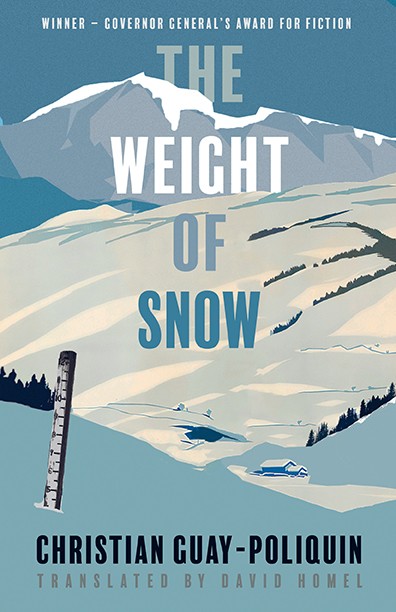 The Weight of Snow – Christian Guay-Poliquin’s novel: an existential story whose antihero protagonist is, as this reviewer puts it, “a man in a hell of a fix.”

When I first learned about the enigma that is existentialism, I was an undergraduate English major assigned Franz Kafka’s “The Metamorphosis.” I still remember how the class began. Our courtly professor stood before us, nodding his head while steepling his fingertips, and announced that when “Metamorphosis” protagonist Gregor woke up that morning, a man in the body of a cockroach, he was “a man in a hell of a fix.” Whenever I think of existential anti-heroes, I remember that laconic, professorial line, “a man in a hell of a fix.”

Such is the case with Christian Guay-Poliquin’s unnamed central character featured in The Weight of Snow. He indeed is a man in a hell of a fix. Badly injured in an auto accident while driving to see his estranged father, he finds himself isolated in the village where he grew up. He learns his father is deceased. Then the village is quickly enshrouded by winter, without electricity, without contact with other communities, without sufficient supplies. Incessant snow falls every day, on dehumanized scenery reminiscent of so many other existential settings. The nameless man’s problem? How to survive in a landscape devoid of meaning? How to live in an empty world?

An elderly man named Matthias tends to Guay-Poliquin’s anonymous protagonist. Matthias is marooned in the village, too. Desperate to return to the city, he agrees to nurse the injured derelict in return for a promise to accompany those who manage to leave the village when winter has ended. In the meantime, Matthias and the unnamed man live just beyond the village boundary, on the enclosed porch of a deserted house. Much of The Weight of Snow describes just that, their day-to-day lives consumed by the details of eating and staying warm while under the weight of snow.

Doesn’t that sound like an existential world? Snow, day after day. Struggling for survival. Foraging for food. Tearing down the walls of the house for firewood. Watching the drifts grow deeper. Eking out a meaningless existence. Enduring unexpected acts of betrayal. Enjoying random acts of kindness. Counting the repetitive days. The plot itself reminded me of another existential angst we studied that semester long ago—Jean Paul Sartre’s play, “No Exit,” where the characters are caught in another kind of hell with no escape. Likewise, the frozen characters of The Weight of Snow are trapped, too.

Guay-Poliquin explains none of their circumstances. Why this particular winter is so fiercely cold; why there is no electricity; why no communication exists between locales. In fact, I don’t even know where this novel takes place, and I was never told the exact circumstances that led up to the enforced isolation. Instead, I suffered alongside the injured man while his shattered legs began to heal, while he learned to manage crutches, while he tentatively explored his surroundings, while he hesitantly communicated with his fellows.

But Guay-Poliquin breathes life into this cold anti-hero, especially highlighting his coping mechanisms and his persistent will to live. The author breathes life into the surroundings, too. The monotonous days feature striking moments when the weather changes, when the roof leaks and then collapses, when plans to escape are thwarted, when food grows increasingly scarce. Like the very best existential writers, Guay-Poliquin creates an inhumane world populated by human beings and does so in ways that force the reader to contemplate the unthinkable, the improbable, the absurd. And to empathize with the trapped protagonist when he persists in being “completely convinced that, whatever we do, whichever way we choose, our actions and decisions will be meaningless.” Trapped in an existential world, he is indeed a “man in a hell of a fix.”  –  Ann Ronald 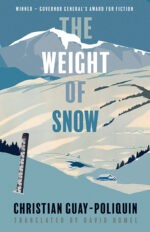 Ann Ronald is a retired English professor from the University of Nevada, Reno. Author of dozens of reviews, she’s also written a number of books about the American West. They include literary studies such as The New West of Edward Abby and Reader of the Purple Sage, cultural studies such as GhostWest and Oh, Give Me a Home, and nature writing such as Earthtones: A Nevada Album. Her latest is a work of fiction, Friendly Fallout 1953. Since retiring, she’s been reading vociferously, so “Bookin’ With Sunny” is giving her a wonderful opportunity to share thoughts about her favorite new discoveries.
More from this reviewer
PrevThe Exiles
The Postmistress of ParisNext